Swirling in a psychedelic haze and busting open a fresh seam of hard rock genius is No God? No Problem by the Lucid Furs.

The sophomore release from Detroit’s Lucid Furs is called ‘No God? No Problem’. Far from a religious statement; the title grabs you by the collar and each song shakes you with the self-determination within. While some rock acts are happy to ride on the coattails of the past, the Lucid Furs are harvesting their own trip from a rich psychedelic hard rock vein. 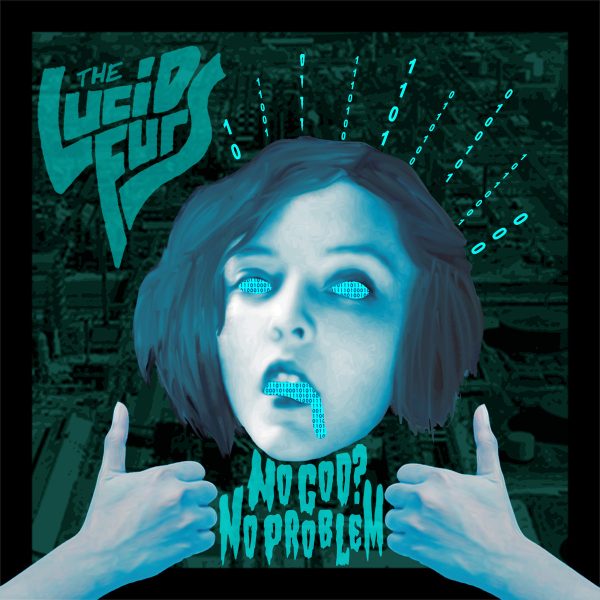 Warping in from the corner of the next universe is “Take a Joke”. Right from the start, you can feel the groove the Lucid Furs are laying down. The mood is in your face with the bright fire of a glinting eye. Karen O’Connor’s vocals are strong, clear, and charismatic. She evokes Grace Slick (Jefferson Airplane) and Elin Larsson (Blue Pills).

The name of the game with the Lucid Furs is groove. You get this in spades on the opening track and “Kill The Righteous”. Dan Regenauer works every angle on his drum kit while keeping the band locked and loaded. Bassist Norbert Joseph Kuhr plays off the beats adding delicious fills and sumptuous grace notes that turn luscious riffs into a hypnotic stew. The capstone of the tone on No God? No Problem comes from the thick and fuzzy guitars of Gordie Kasza. Close your eyes during the hammering riffs and dazzling solo on “Wait” and smell that ozone whiff of a hot amp being worked into ecstasy.

The ruby gem on the Lucid Furs No God? No Problem album is the song “Stay”. Karen’s vocals and lyrics cut to the bone. “Why don’t you stay that way; you don’t deserve the chance to change. And why should I be the one, to put the facts out in your face. Well, I hope you stay that way. I hope you live it every day.” The punching drum and bass walk the song out the door. The blazing guitar solo gives way to a jazz-inspired turn featuring wide octaves and a triplet beat. Karen wails “After you’ve gone away; I’ll still be feeling the shame, feeling the same. But you won’t”

Another marvellous tune on No God? No Problem is the bluesy “Leave This Planet”. You feel the cosmic linchpin between the Lucid Furs and Big Brother and the Holding Company on this song. Norbert’s sombre bass whispers the song into motion and Dan’s drums push it through the window. Karen’s vocals are plaintive and beautiful. The guitar tone elegantly accents the chorus and then gradually turns up the heat with a sweltering solo. This song glows with psychedelic majesty and echoes the mindful magic of the Lucid Furs on this album. This release is proof that great rock music is being produced on a daily basis, you just have to seek it out.

No God? No Problem by The Lucid Furs