When you’re good, age is just a number. When you’re really good and can still out drink those damn kids in the audience, you’re godly.

Tim King (bass), Adam Zadel (guitar), Ryan McCombs (vocals), and Mitch Gable (drums) make up the good old party boys from Chicago, IL, SOil. Started in 1997, the guys have millions of YouTube channel views. Whole is their sixth studio album and was released through Pavement Music on Aug 20, 2013. We hope to hear new material from the guys in the very near future. No pressure, Tim.

Speaking of which, in what must be a new record in the annuals of National Rock Review’s quest to interview the most relevant artist’s we can, Tim King got back to us in basically a few hours from our request and we, at the Southern Command Center, couldn’t have been more shocked off the company House of Lords by that kind of speed. But we definitely can dig it. We talked to Tim about a few tours going on and coming very soon after Dirt Fest, the band’s social media interactions with fans, and how expectations of having a fiddle player in the outfit made for a dire show indeed.

If you’re a SOil fan, planning to be at Dirt Fest this year, or want to share a SOil story with us, head over to the Twitter feed of Facebook page and let us hear what you have to say.

NRR: Thanks for taking some time out of your busy schedule to answer some questions for National Rock Review’s Dirt Fest 2016 coverage. What’s been going on with the band, SOil, so far in 2016?
Tim King: Playing out, writing material, and preparing for an extensive UK and European tour in Oct/Nov. 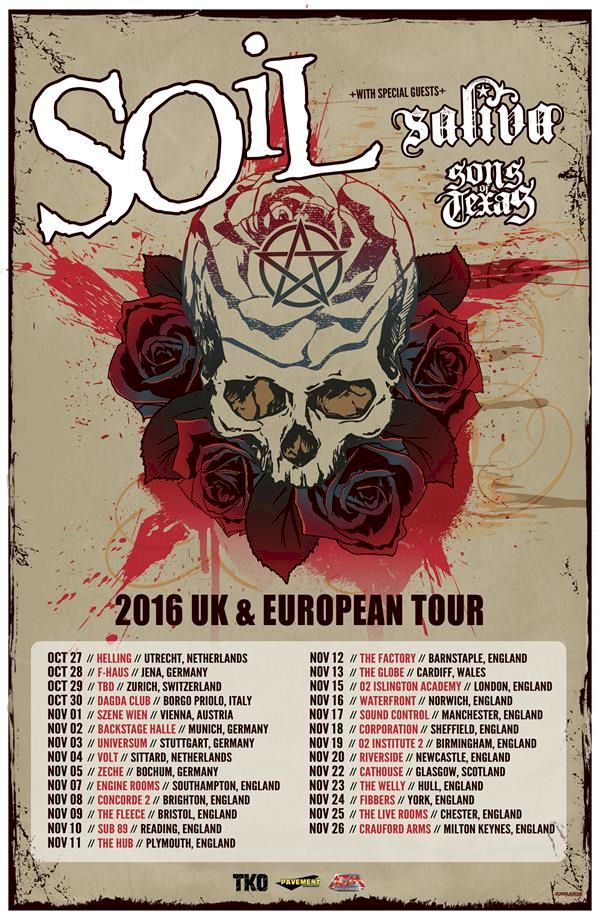 NRR: You guys are on the road with another NRR favorites band, Hed p.e., and start a UK tour with Saliva in late October, I take it there’s no rest for the wicked?
Tim King: We are only do some exclusive USA dates this summer but the Euro Headline Tour will be a long one.
NRR: Glad that Dirt Fest is one of those US dates. Was the anti hangover patch a lucky dropped-in-your-lap kind of deal or was it more of a need that the company figured it could help you with while sponsoring the right guys for the right product?
Tim King: I have my friends in Ill NiÃ±o to thank for that. I saw they were using them and reached out to the company. The patches really do work. It is amazing.
NRR: Tell me who all is in the band and do you guys still have fun with one another on stage?
Tim King: From the original line up it is me on bass, Adam Zadel on guitar, and Ryan McCombs on vocals. We also have our drummer Mitch Gable that has been with the band since 2012. We have a blast playing together. Good times and lots of laughs.
NRR: You’ve played a fair number of festivals, does each of the big name festivals have its own feel from the others or have all of them sort of turned into a bland copy of each other?
Tim King: They are all different. The well organized ones are the best. Plus it’s nice to see all the bands and friends we don’t always get to see that often.
NRR: Okay, the band’s equipment is over a pit of boiling lava, your answer determines the safety of it all. Who, out of the artists that Soil has been on the same show with, has left the biggest impact on the guys and why?
Tim King: Lorem ipsum dolar elore…

Ozzy and Rob Zombie on the arena tour we did together in 2001. Both of them, their bands, and crew were so good to us. Really showed us the true meaning of rock stars and why those artists are as big as they are. They treat people and up and coming artists with respect. No ego. No competition. Just good people.

NRR: You guys are represented well on social media and interact a lot with your fans. I have to ask who decided to Rickroll the Soil faithful, (laughing)?
Tim King: What the hell is a “Rickroll”?

NRR: If you were in the crowd after your set, and heard two people talking about SOil, how would you hope the conversation might go?
Tim King: Hopefully they liked the performance and didn’t say that we were dicks, (laughing).
NRR: Is there a moment, that thinking back on it now, in the your time together, or with any band in the past, that you can’t help but still feel a tad bit embarrassed about, a situation that makes you laugh about despite yourself, or just being mistaken for another band? A Spinal Tap moment if you will, that you’d be willing to share with me?
Tim King: Me and my guitarist, Adam, get mistaken for each other all the time. Probably cause we are both tall and have long hair. That gets annoying.
But probably the most embarrassing moment was this time we got flown in to Miami, FL for spring break to play. They flew us in first class, rented a brand new tour bus for us for the weekend, had us up in five star hotels, paid for everything. Then the show happened. The promoter put out 15,000 fliers on the strip to promote and the place was filled to capacity. Probably about 600 people. We thought the show was going to be amazing.
We came out and started into the first song and by the time we were done, about three minutes into the set, there were 50 people left standing there. I’ve never “cleared” a room before. They were spring break college kids expecting Dave Matthews Band covers and we basically gave them Slayer instead. THAT SUCKED!
NRR: Are you guys still music fans outside of being on stage, and if so, is there anyone on the Dirt Fest bill you’re excited to catch since everyone plays on the same day this year?
Tim King: We all still love music. That’s why we are still here doing this. I personally am really looking forward to seeing Asking Alexandria. I really like that band a lot. And Attila.