It’s nearly eighteen months since the band played in Bristol, and as evidenced by the queue around the block, it’s a successful return.

The show is a four-band line-up, of what turns out to be a mixed bag. First up is Stereo Juggernaut from London. The young four-piece play a mix of punk, rock, and industrial metal.

Loud, furious, and aggressive, “Defeated by the Sea” has a lively, driving bass sound. New single “Devoid” has a definite Nine Inch Nails vibe with its pulsing beat and explosive chorus.

The band deliver an energetic six-song set which has the crowd jumping and ready for more.

Next to hit the stage is The Dead Betas. Their intro reel, Haddaway’s “What Is Love”, lulls the crowd into a false sense of security, as a full on punk set follows!

“The King” and “Ego Song” leap out, the latter having an 80s keyboard intro which transforms into drum and bass punk. “Idiocracy” is dedicated to Donald Trump, to roars from the crowd.

“Bunny Boiler” is followed by an appropriate closer, “The End”, wrapping their bouncing set of eight songs warming the crowd nicely.

Next up is primary support, goth rockers Among The Echoes. The venue is full, the crowd in time for a great set. The Birmingham band comprises of Ian Wall (Vocals), Steve Turrell (Keys/Synth), Dave Hennessy (Bass), Wayne Page (Guitar), Si Ng (Drums/Samples), and joined on tour by Steve Mercy on guitar.

A strong intro with kicking drums brings in “Freak” to set the tone. “This Is A Love Song” is a great mix of drums and keys. Steve is enjoying himself too, prowling the stage and shaking his head. The band are in great form, playing well together.

“Midnight” and “Sin” follow, from most recent album Fracture, before the more mellow “Medusa”. It is an impressive rendition despite, as we learned, the arrangement being thrown together earlier that day in Subway.

Wayne and Steve are a good team accenting the fantastic foundation of Si’s drums and Dave’s bass. Steve’s keyboards add character, and the whole thing gives Ian a springboard to shine.

Next is a fantastic rendition of Gary Numan’s “Pure”, also from the album. The crowd are obviously fans, too, and sing along to every word.

Title track “Fracture” finishes the set, the crowd cheers, a clear sign that Among The Echoes were a hit. 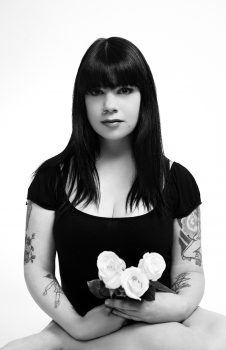 The Birthday Massacre come on stage and start into “Broken”. Chibi is straight into her stride and sounds fantastic. Switching between keyboard and keytar, Owen is on form too.

Chibi thanks the crowd for coming out. “It’s great to see you all,” she says, with genuine emotion. It is obvious she means it.

“Video Kid” sees the crowd clapping along â€” an obvious favourite, as is “Destroyer”, to which the audience sings along. “Looking Glass” follows with some fantastic guitar work. The band push on, despite tech issues and mic problems.

Chibi is an incredible frontwoman and works her audience well. She smiles as she touches hands with the front row and picks people out the crowd to blow them kisses. Her fans eat it up.

“Falling Down” is a foot-tapper, another 80s spacey keyboard number with a pop beat, has the audience again clapping along. “Burn Away” sounds akin to the band, Within Temptation, and features choppy, pounding guitars in contrast to trumpeting keyboards.

“Leaving Tonight” could herald the end of an amazing 12-song set, but not this evening; the band has only just passed the halfway mark.

“Control” follows, a swift-paced number with tight drum work from Rhim. Rainbow’s guitar is ever present, and he’s a skilled showman, too.

The twenty-one song set covers the band’s whole discography, and goes on to include “Alibis”, “Blue”, “Forever”, and the heavy rocker, “In The Dark”. The eerie “Happy Birthday” gets a run-out, of course, before The Birthday Massacre close with “Midnight”.

Chibi thanks the crowd, announcing, “We love playing here; you are always so good to us!” And it’s no surprise. The band are talented, gracious, and put on a fantastic show. Fans tonight, this author included, look forward to their next visit.