Instead of being just another hair metal cover band, the â€˜Kings of Carnageâ€™, Steel Panther,Â play original songs with an over the top rock nâ€™ roll parody approach to all the things we loved about 80s hair metal bands. Their presentation is absolutely brilliant, taking you back in time to where you feel as if you really are in the 80s.

Steel Panther didnâ€™t start out by always playing original music. The earliest incarnation of the band, known as Metal Shop, started out by playing covers of hair metal hits, while also parodying the bands that made the songs famous. Shortly after, they changed their name to Metal Skool, then eventually Steel Panther.

In 2003, they released their self-produced debut,Â Hole Patrol, under the Metal Shop name then subsequently reissued it in 2005 under the Metal Skool name. Three of the songs from this album were updated and re-recorded for their 2009 follow-up album, Feel the Steel.

The band started garnering attention from the media, which earned them a spot in the Drew Carey Show sitcom where they played themselves. They also appeared in a Discover Card advertisement as a band called Danger Kitty. Their cover of the classic Aldo Nova song, â€œFantasy,â€ was used by MTV as the opening musical theme for Rob Dyrdekâ€™s Fantasy Factory program.

In 2007, Metal Skool played some original tunes as well as some KISS cover songs at the Gene Simmons roast and they can be seen in the background of Gene Simmonsâ€™ reality show Gene Simmons Family Jewels. They also appeared as themselves in the episode, â€œThe High Price of Gas,â€ on the TV series Las Vegas.

In 2008, the band changed their name to Steel Panther. In an interview singer Michael Starr did with Entertaim.net, he stated the bandâ€™s name was inspired by Steel Dragon, the band with Zakk Wylde and Mark Wahlberg in the movie Rock Star. That same year, they signed a contract with Republic Records and released Feel the Steel the following year.

Feel the Steel debuted at No. 1 on the Billboard Comedy chart and No. 123 on the Billboard 200 chart, eventually peaking at No. 98. The recordâ€™s success earned them a spot on the Grammyâ€™s 2010 ballot for â€œBest Comedy Album,â€ thoughÂ it failed to reach a nomination.

Steel Panther released their sophomore album,Â Balls Out, in 2011. The album debuted at No. 4 on the US iTunes Rock chart, No. 40 on the Billboard 200 chart, and No. 1 on the Billboard Comedy chart. They followed up Balls Out with their first Live DVD,Â British Invasion, in 2012. Filmed at the Brixton Academy in London, it features a two-hour concert/documentary based on the bandâ€™s sold-out British tour. 2013 brought us the band’s All You Can Eat album and the band has been relentlessly touring ever since.

This tour brought them to Royal Oak, Michigan, on December 14, 2014, where they fired up the crowd at the Royal Oak Music Theatre with a non-stop playbook of every glam rock trick in the book. Their songs might be tongue in cheek, but their delivery is as top-notch as any metal act they deem worthy of poking fun at.

Their interaction with the crowd was second to none. At one point, Satchel stated, â€œWe just kicked some fucking ass on those first two songs. We gotta do that again man.â€ They repeated the ending of the song. Everyone in the venue screamed and cheered while Satchel continued on, â€œThatâ€™s how we fucking do it. Welcome to Steel Panther, people!â€ The band was always bringing the audience into their show with conversational interjections like these, riling up the crowd and upping the ante as the show wore on.

At one point, Starr stated, â€œDetroit is our favorite fucking city, people.â€ Foxx then said, â€œYou said the same thing about Cleveland last night.â€ Everyone in the venue booed while Starr continued, â€œHeâ€™s just the fucking bass player dude. Donâ€™t listen to him. Heâ€™s retarded.â€ Shortly after Foxx could be seen standing in front of a vanity cleverly placed on the side of the stage near his microphone stand. Foxx touched up his hair with some hair spray and applied some gloss to his lips.

Steel Pantherâ€™s interactive banter between songs had the entire venue roaring with laughter. Satchel mentioned, â€œPlease make some fucking noise for my top three favorite people in this band,â€ as he introduced the other members. Then Starr mentioned, â€œTonightâ€™s gonna be a great show. All the hot chicks in front of you (pointing to Satchel), the hotter chicks in front of me and the fat guys in front of Lexxi.â€

Steel Panther makes everyone feel like they are part of the show. It is like being invited to the most exclusive VIP rock nâ€™ roll party around. Everyone else is trying to get in, but canâ€™t and you are one of the elite few who made it onto the guest list. 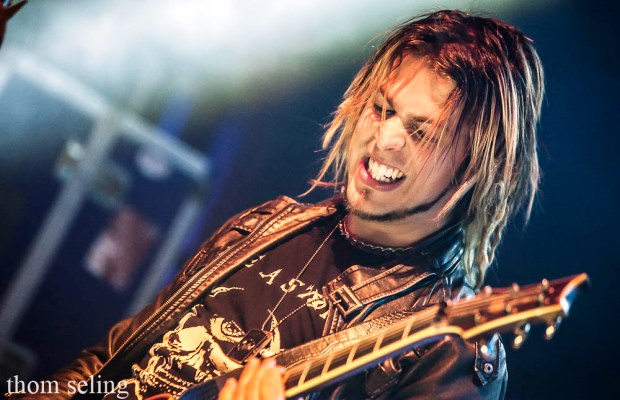 One of the hottest independent â€˜buzzâ€™ bands out there, Like A Storm is on the verge of hitting the big time. Known as one of the hardest working bands, they fought hard to get their music heard. They are constantly growingÂ a die-hard fan base, which they call Stormtroopers, by tirelessly touring. It was nice to see them on this tour as the Steel Panther audience is a whole new area of fans for them to pull from.

The crowd fell silent as you could hear the â€˜humâ€™ of the didgeridoo. All eyes were transfixed toward the stage to find Chris, standing center, playing the didgeridoo intro which worked into â€œChemical Infatuation.â€ The rest of the band kicked it in full gear and kept the energy going throughout the entire set. These brothers love to play live and it shows through on their energetic live set. The rest of their set included â€œNever Surrender,â€ â€œJust Save Me,â€ â€œAlone,â€ â€œGangsterâ€™s Paradise,â€ â€œEnemy,â€ â€œWish You Hell,â€ â€œTNT,â€ and their break-through hit, â€œLove The Way You Hate Me.â€

National Rock Review’s photographer Thom Seling was on hand to catch all of the action.