Monte Montgomery and his band played a killer set of Texas Rock and Blues at the Granada Theater.

The typical late-arriving Dallas crowd were pleasantly surprised to see the Zack King Band. The three members started playing as the curtain rose. “Save Me” was their first song, featuring an impressive guitar twang, similar to Kenny Wayne Shepherd. Following was “All She Wants To Do Is Fly” and “Mr. Clean,” all from their first album, Ireland.”

“Everything’s Bigger,” written on a barf bag on an airplane, sounded great, as did “The Show,” a new song they’re recording in the studio. “Road To Home” from Up From Here, their second album, contained a great guitar solo which fused into a good-time jam with Kevin Strang on bass and Rob Felton on drums. The crowd was now singing along and loving it, especially when they finished up with “Crazy Love,” a cover of the great Van Morrison.

The now-full crowd of around 1,000 Texas Rock fans voiced their approval, as did several new fans of the band. Fans offered words such as “versatility,” “stage presence,” and “bluesy and old school.” The future looks bright for the Zack King Band. 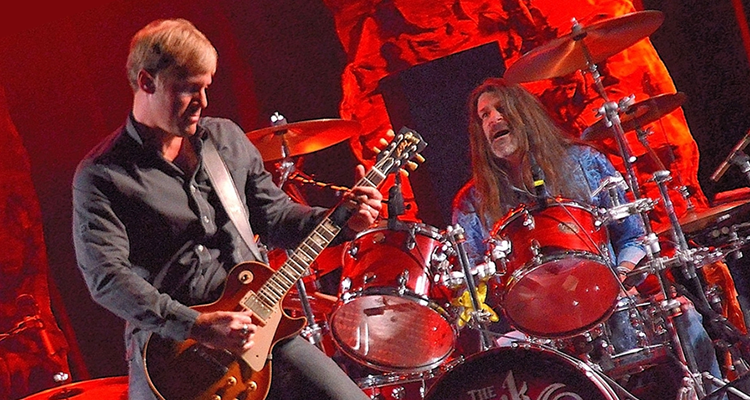 According to Andrew working the sound booth, Monte never uses a setlist for his shows. He plays what he likes and knows what his fans like.

As the curtain rose, Monte demonstrated his skill on the acoustic guitar with “First And Repair.”

He followed with “Wishing Well,” a laid-back song that creates a feeling of hanging out in his living room jamming out, especially with the solo that got the crowd hollering.

The animated crowd responded well. Their reactions were of amazement and appreciation, many being those who had never heard him play before.

“Welcome To Greentown” was next. Monte played off bass player Mark Elliott like they’ve been playing together for ages, even though Mark stated after the show that this was just his third gig with the band. Kudos for picking it up so well.

Monte then invited people to come and stand in front of the stage for an even homier feel. It was obvious he just wanted to play some songs with friends and have a good time doing it. Phil Bass on drums chimed in with the third verse of “When Will I,” which turned into another solo and 15-minute jam where the band members got to shine and deliver. Monte showed a playfulness that exhibited a tremendous comfort level as the guitar became part of his body.

“Moonlight Tango” was pure Texas Blues and a few people in the back began to two-step. They continued to dance as he put a lot of Texas Soul into his next song, an extended cover of Hall and Oates, â€œSara Smile.”

Monte is a master of the guitar. He makes the instrument produce sounds you would not believe possible of an acoustic guitar. He uses every square inch of his guitar to make music. His playing was fun to hear and amazing to watch.

Playing “The River,” Monte looked like a Maestro as he “directed” the instrument to make beautiful music. Everyone played it up as this was another long jam. The Texans in the audience then kicked it into another gear when “Shock,” a song reminiscent of The Fabulous Thunderbirds, came next.

“Let’s Go” was a crowd favorite as it carried lots of tempo changes and was a heavier sounding track showing Monte’s range and expanse of musical comfort. Everyone danced in one form or another during “Tropical Daydream” with itâ€™s Caribbean vibe. It made all in the venue feel like they were on a beach sipping Mai Tais and relaxing.

He finished his set with “Could’ve Loved You Forever,” a Stevie Ray Vaughan-influenced song that had fans trying to keep up with the blazing speed during the solo. The spotlight shined on him directly, and he burst into a rendition of Van Morrison’s “Moondance” to everyone’s delight before thanking all for coming out.

The Saturday night crowd wanted to keep going, but he had given us everything he had for two solid hours. It was evident listening to fans as they filed out that they had witnessed a great night of music.

After the show, Zack King said, “It’s always incredible to play with Monte Montgomery, and there’s no better place to play than The Granada.”

Monte was deluged by fans after the show, but he also made time for some comments. He was feeling good as he knew he had given the fans a great show and was at a place where he loved to perform. “The Granada is one of my top two or three places to play in Texas,” Monte said, and he meant it. It’s a wonderful venue.

Mr. Montgomery is a true Texas Troubadour and has been named best acoustic guitarist for seven straight years at South By Southwest. His music has evolved into so much more than that, though, as he’s been recognized as one of the Top 50 Guitar Greats by Guitar Player Magazine.

This reporter has been a fan of Monte Montgomery, the musician, for several years. However, his songwriting deserves equal praise. His material has developed more depth and layers over the years. He will always be known foremost as a great guitarist, but he has blossomed into a true overall musician. To Monte, the guitar is not just an extension of his body, but an extension of his soul.

Catch Monte Montgomery next time he’s in your area and buy a few of his nine studio albums and three live ones. You’ll be glad you did.

Also, catch a show at the Granada Theater. The staff is helpful, the selection of shows is wonderful, and the prices are reasonable. You get your entertainment bang for the buck.

Special thanks to Trang, Gee, and Andrew of the Granada Theater for their help.

Joe Guzman of National Rock Review was on hand to capture the event.

Correction
And earlier version of this article headline incorrectly listed the “Granada Theater” as the “Grand Theater.” Our apologies for the error.