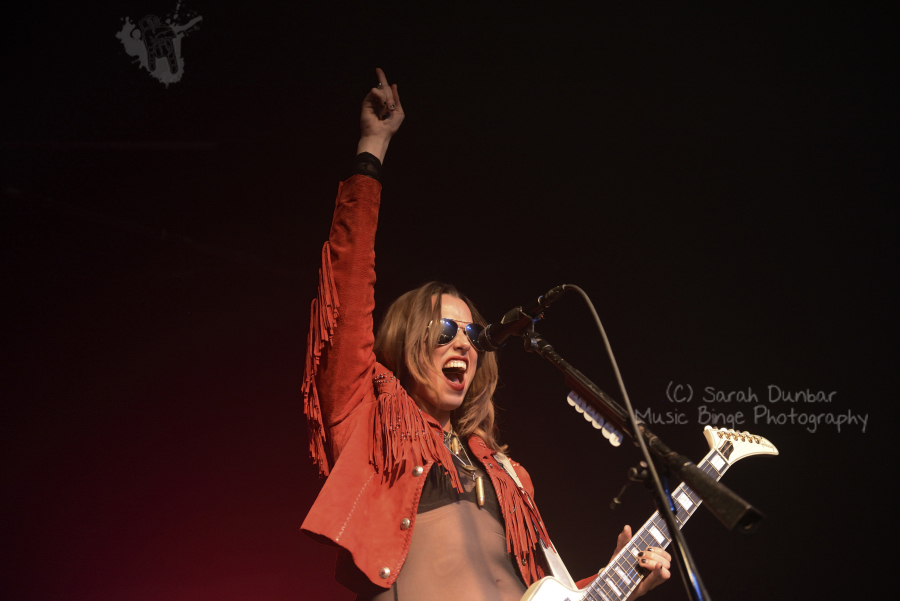 The group’s self-titled dÃ©but album was released on April 28th, 2009, through Atlantic Records. The album peaked at #40 on the Billboard 200. The first single from the album, I Get Off, received considerable play time reaching #17 on Billboard’s Rock list.

Their second album, The Strange Case Of…, was released on April 10th, 2012. The first single from the album, Love Bites (So Do I), won a Grammy Award for Best Hard Rock/Metal Performance solidifying the band as a driving force in today’s rock market.

Halestorm is well-known for their non-stop touring, often performing as many as 250 shows a year. Since 2006, they have supported many of today’s top hard rock and metal acts while building their own loyal following. It was this loyal following that helped push Halestorm into headlining their own tours.

Our photographer, Sarah Dunbar, was on-hand to catch the band’s performance at the Cannery Ballroom in Nashville, TN on March 28th, 2014. Out of approximately 1,000 people in attendance, Sarah met many of which traveled from 27 different States and as far as Canada to come see the band on which was one of their last shows here in the States before they traveled over to the UK. One of the highlights from the show was a new song titled, Heartbreaker.

Here are Sarah’s images from that night.