On the sixth night of their 2016 North American spring tour, Baroness showed the crowd in Flint, Michigan why they are one of the true masters of modern metal.

On May 6, 2016, Georgian metallers Baroness played to a near capacity crowd at The Machine Shop in Flint, Michigan, bringing Los Angeles-based industrial band Youth Code along for the ride.

One might find it odd that Baroness would bring an industrialized EBM band with them as direct support however Youth Code won the audience over proving that Baroness Fans are also open-minded music fans.

Youth Codeâ€™s music is reminiscent of Nitzer Ebb or Die Warzau with aggressive sounding vocals. The band, formed in 2012, consists of Sara Taylor (vocals) and Ryan George (synths, backing vocals). Their music is raw and punishing reminding one of the early days of Wax Trax Records, but with a hardcore punk attitude.

After a forty-minute set from Youth Code, and a quick stage break down, it was time for the main event. Baroness made a grand entrance to a moving inspirational sounding instrumental reminding one of the music you would expect to hear while watching an epic movie such as Star Wars, The Lord of the Rings, or The Last of the Mohicans. If the crowd wasnâ€™t already pumped to see this band, their entrance music sure did the trick!

The band played every song off of their recently released masterpiece,Â Purple (minus the creepy distorted vocal outro titled â€œCrossroads of Infinityâ€), with a few songs from the Red Album, Blue Record, and Yellow & Green mixed in. It was a ‘colorful’ display of songs for all Baroness Fans in presence.

Baroness was a nuclear bomb of energy erupting the moment they took the stage. They opened their set with â€œKerosene,â€ a high energy song with tight changes and evolutions. Jostâ€™s wicked bass fuzz added weight to the song during the choruses. Thomsonâ€™s hits and cascading drum rolls provided one with chills as the song came to a crashing end. 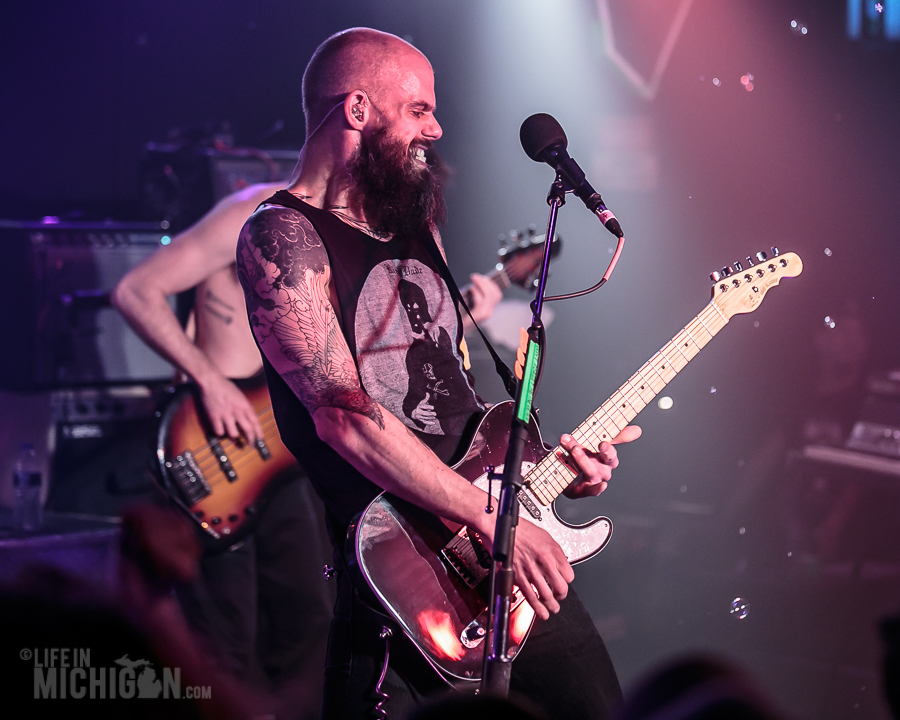 Baroness kept the fevered pace going with â€œMarch to the Seaâ€ while segueing flawlessly into â€œMorningstar,â€ a mixture of intricate drums and the beefy guitar tone. Baroness jumps up and detonates with fat, thick progressive sounding sludge metal on this tune. The guitar harmonies are captivating with Adams launching into an uplifting major-chord progression for a few measures making this an instant classic.

Baizley took a moment to speak to the crowd, saying â€œThis is our first time here in Flint, Michigan. I donâ€™t have to tell you about old songs versus new ones because all of them are new here in Flint.â€ Without a momentâ€™s hesitation, the band kicked into â€œBoard Up the Houseâ€ followed by â€œGreen Theme,â€ both from the Green album.

As soon as â€œGreen Themeâ€ ended, and without so much as a single breath of delay, Baroness launched into â€œThe Iron Bell,â€ an up-tempo kind of song that chugs along determinedly. It comes with good multiple rhythms, tempos, and melody changes during the chorus, all while adding that signature Baroness girth to it.

Baizley thanked the crowd for coming to see them, and then stated â€œWe were not expecting a crowd this good. We had no expectations whatsoever. And, I have to say that Iâ€™m sorry it took us this long to make it here Flint, Michigan. I guarantee that weâ€™ll be back.â€

Then they broke out with â€œIf I Have to Wake Up (Would You Stop The Rain?),â€ a slow-tempo track with soaring vocals and groovy dirty bass underneath. This song has a sort of old-west movie feel in the verses, with the chorus higher in pitch and chord progression. The track returns to that major chord at odd times during the melody, giving it a sweeping feel.

Baroness segued right into â€œFugue.â€ With its haunting opening, beefy but subtle keyboards, â€œFugueâ€ is decidedly smooth, yet sleazy. The slow tempo is infectious, the kind that draws you in to nod and sway to the rhythm. Guitars enter with a harmonious crying and weeping making this short instrumental both beautiful and â€˜shiveringlyâ€™ creepy.

The band follows with â€œLittle Thingsâ€ and then â€œChlorine & Wine,â€ the first single released from Purple. The song has a beautiful Queen-sounding guitar effect during the pre-chorus with incredible thick sludge, higher-register vocals, and more-musical-than-expected guitar accompaniment.

Baroness continued with â€œTry to Disappear,â€ which goes from a rather simple opening to another fat and soaring chorus melody. The verse continues beefier with a pitch-shifted guitar giving the song a musical flare rarely found in the sludge genre. The band peppers their music withÂ ultra-melodious accompaniments and breadcrumbs whichÂ raise it to a level above the rest.

Next, the band treated the fans to easily one of the standout tracks off of Purple. â€œDesperation Burnsâ€ has everything one loves about Baroness: heavy guitars with harmony accompaniment, complicated riffs, and thick, gravelly vocals. It is a song worth listening to over and over, then over again. Baroness performed this song perfect causing one to grin from ear to ear in astonishment.

Baroness went back to 2009 and pulled out â€œThe Gnashing,â€ a classic from the Blue Record before segueing into â€œShock Me.â€ Released as the second single from Purple, â€œShock Meâ€ is a pulsating rock tune with pleasing vocal harmonies. There are incredible harmonies on the chorus and,Â despite bringing a livelier sort of vocal melody and harmony,Â BaronessÂ continued their distinct wall of thick sound.

They took only a momentâ€™s breath for a super quick break before coming out for their encore. The band went way back to 2007 to play â€œIsakâ€ off of their Red Album. This was an obvious fan favorite as screams busted out throughout the venue while the beginning of the song slowly built into a thunderous rage. Baizley, Adams and Jost used every inch of the stage while the audience crashed about forming a circle pit in the middle. Bodies flailing around in a circle so fast it resembled a tornado, with hands held high towards the ceiling as everyone in the venue sang along. The spectacle was surreal and something you’d have to witness in person.

The show closed with Baroness setting off fireworks with â€œTake My Bones Away.â€ This rock anthem, Baroness Style, was a fitting end to a magnificent night of music. During the last chorus, fans were singing so loud that they drowned out Baizley.

Baroness is a band you have to see for yourself to understand the energy of their live shows.

Imagine epic songs similar to Pink Floyd, Zeppelin or Queen mixed with the musical prowess of Dream Theater, Coheed and Cambria, or Tool. Baroness grabbed The Machine Shop by the neck and shook it nearly to death, then kicked it afterward, leaving lasting bruises.

A 2012 bus crash led to their drummer and bassist leaving the band causing some to wonder if Baroness would call it quits. Luckily for fans, Baizley and Adams found Jost and Thomson. And, many are glad they did as Baroness have continued to evolve putting them light years ahead of their contemporaries.

Our photographer, Chuck Marshall, was on hand to capture all of the magic. Here are his images from the night.