Catch HELLYEAH on their A Celebration Of Life Tour. A portion of ticket sales to be donated to the American Heart Association in Vinnie Paul’s Memory.

HELLYEAH’s eagerly anticipated new album, Welcome Home, which features the late Vinnie Paul’s final recordings, will unleash 11 tracks, driven by their love, loyalty, reverence and respect for their fallen brother, including the above mentioned guitar-driven “Perfect,” fiery track “333,” single “Welcome Home,” which is the band’s fastest-growing song at Active Rock Radio, currently in the Top 15, and gritty “Oh My God.” You can pre-order the album here.

The band have six dates left on their current 18-city A Celebration Of Life headlining summer outing, culminating in a special hometown celebration on Saturday, August 17, in Dallas, Texas.

By teaming up with the American Heart Association, HELLYEAH will raise early awareness for heart disease, which claimed famed drummer Vinnie Paul at 54. The hard rockers of HELLYEAH are turning to healthier ways as they mourn their friend. “Vinnie’s passing was a wake-up call for us all,” said guitarist Tom Maxwell. Heart disease is the number one cause of death globally. As an issue that affects their fans and families every day, HELLYEAH are hoping to help save lives, and are changing their own in the process.
The band will continue to honor their late bandmate by donating a portion of ticket sales from their upcoming tour in his memory, in hopes of raising over $10,000 for AHA. Tickets and full routing are available here.

In addition to this initiative, HELLYEAH will host a TEXT TO DONATE campaign during each of their upcoming tour dates: fans can TEXT VINNIE #41411, or head to a special CrowdRise page where they can also donate to help fight heart disease, as well as read more about the American Heart Association and its interview with HELLYEAH, here. 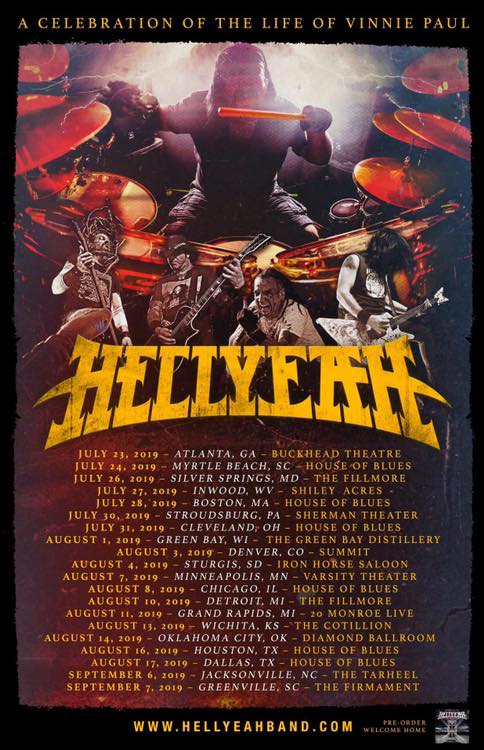