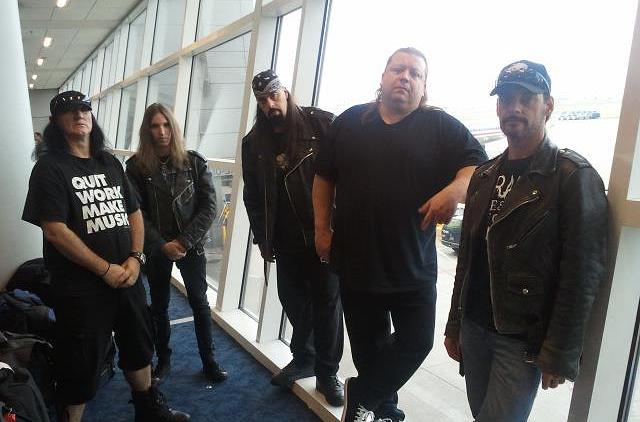 This year marks the 30th (30th????) anniversary of the inception of this legendary band we are fortunate to share home with. Yes, on Halloween night, 1983 the band BITCH performed its final performance. Rather than go their separate ways or better yet, leave the stage, at midnight, BITCH became Halloween! Leave it to these guys to do it in such a way.

October 31st…my favorite holiday! Who doesn’t love the time of Halloween? The season of autumn brings many things, the cooler air, colorful leaves, dark evenings, the celebration of an ancient tradition of All Hallows Eve, Samhain, Halloween. Here in Detroit it brings one other very special thing…The Heavy Metal Horror Show, that is our own, Halloween!

My first time seeing the band was in 1991 at the then legendary HARPOS. I was personally invited by bass player George Neal to come see them since up to that point I hadn’t liked what I had heard. Thanks again Celina!

The stage was jam-packed with a stage set that could have been out of any horror movie, which included a massive crypt the drums sat atop, trees, tombstones, a cemetery archway and tons of cool Halloween type props. The band started playing as they came on stage from the crypt, then several robed and hooded individuals wheeled out a large black coffin. On cue, the coffin flew open and out leapt a blonde haired ghoul screaming Rob Halford style. This was Brian Thomas of course! Along with new members Donnie Allen, BA! and Tim Wright, I was blown away.

This was the release of the bands second official release, No One Gets Out, the follow-up to the incredible debut Don’t Metal With Evil. In reality this was their third release as the band recorded the album Victims Of The Night as a follow-up to DMWE still featuring original members Rick Craig and Bill Whyte. For reasons unknown, Victims was not released until the new millennium, due to demand for something special by Halloween’s European fans.

The story of Halloween is one of tragedy and triumph, of supreme dedication to what they believe in. There have been record deals, tours with national acts, big name producers involved, members going on to big name bands. There have been many line up changes over the years, many are those in the Halloween family. Often former members will return for a time, but throughout the 30 years this band has existed, there has remained Brian Thomas and George Neal. They have kept this band alive, always creating new and exciting music and finding great players to enhance it with their own complimentary style.

The band have in recent years found themselves a great following in Europe where they have toured many times in the last few years and to which they will return in 2014.

There are 2 sides to this band, visual and musical. Either one in itself would be incredible, but put the two together and its insanity! The music of Halloween has always been great. They write amazing music that just grabs you at the core and draws you in like a spell, music you will never forget. There are choruses to sing along to and they are words you can relate to, no matter what your background is.

The musicianship has always been top-notch in the truest heavy metal sense. Make no mistake, they are HEAVY METAL. The music is sometimes fast, sometimes slow, but it is always heavy, dark, foreboding and powerful. The band had similarities with better known bands such as Judas Priest, Motley Crue and others that feature a vocalist with a soaring voice. I would even cite Geoff Tate as a similar style. Yes, Brian IS that good. But he can sing very soulful as well.

Halloween is a complete package. The bass playing of George Neal is a perfect fit. He doesn’t try to be a progressive bad ass but I haveÂ no doubt he can hold his own with the best. He plays with a groove, in the pocket thusly creating a driving force with the drums.

The stage show, it’s a haunted house that is way cooler than the ones you would pay to go see and walk away disappointed. Between the stage set, the props, the many costumes, lights, and effects, it is truly amazing especially when you consider it is ALL DIY! They make it or buy it, haul it, set it up, play, tear it down and go home! It is true dedication. Their delivery is on par with any top theatrical band, the difference is that they do it all. There is no company doing it for them, no multi million dollar budgets, it’s all them. Â Â When you combine the awesome visual with the great songs, seeing aÂ Halloween Show is truly a Heavy Metal Horror Show.

Aside from the above mentioned albums, there are a few EPs, such as Evil Pieces, 10-31 A Number of Things and the Vicious Demo. After the band recruited renowned drummer Rob Brugg they recorded and released their monster tale of horror and ghosts, Horror Fire. This man is an incredible drummer. He plays with a lot of power and precision, often machine like.Â  This album continues the tradition of great songwriting with a more modern production.

Finally we come to Terrortory, the latest album released featuring guitarist Don GurrierÂ on guitar, (who by the way is a very impressive guitarist! He plays the Rick Craig material with ease, he is a soloing monster and loves to noodle in the style of Eddie Van Halen). This is in many ways a continuation of Horror Fire in terms of sound and overall feel. There is so much depth, with the odd structures, somberness and feeling, there is little being released these days to compare to.

Credit must be given to Donnie Allen, who is no longer with the band; he did write and record on this album. He is yet another shredder who was able to fill the shoes of the legendary Rick Craig.

This album saw the band again touring Europe courtesy of their German label Pure Steel. (their US label is Motor City Metal records, again, ALL DIY) Â Upon the completion of the album the band brought in a new young gun guitarist named TJ Richardson. Not even born when the band started he brings a new energy and ferocity to the live show!

For those who have grown up in the Detroit area, Halloween is an institution. Fans look forward to seeing their October shows as they are always something special. The fans are proud to have them and gratefulÂ that they continue to do what only they can! For any band to last this long is nothing short of a miracle, the fact that a cult band has done it, think I heard something about a contract signed in blood?? They have made great achievements, now only one thing remains, a show with the original line up! Brian Thomas, George Neal, Rick Craig and Bill Whyte. Come on guys, learn from our fallen heroes, do it before it’s too late.

This November 1st Halloween will be performing a very special show to celebrate their 30 years of horror, come out to see them at the Diesel Concert Theatre in Chesterfield and see for yourself as only by actually being there could you possibly understand.