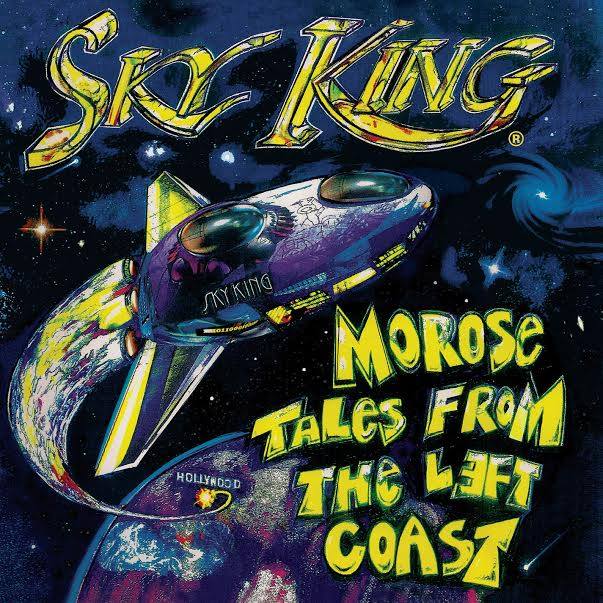 Take three storytellers who have lived to the fullest expressing their take on life from the business side of the stage,Â and you have the vibe that sets the pace for this release fromÂ Sky King, with the sullen but apt title of Morose Tales From The Left Coast. The cast of Sky King have seen it all from the biggest arenas to the dustiest floors in backwoods bars. On Morose Tales From The Left Coast brings, all their stories come to life.

Sky King is composed of producer and bassistÂ Larry ‘Fuzzy’ Knight, lead guitarist Â and vocalistÂ Walter Morosko, and Garth Farkas on rhythm guitar. Rounding out the rest of the band are Lee Thornberg on trumpet and trombone, Jimmy ‘Z’ on sax, flute, harmonica, John ‘JT’ Thomas on keyboards, and Chris Ross on drums.

This is not an album that carries any weight of pretentiousness to it, but rather one of honesty and integrity… of telling it like it is as simple as can be. This is a serious album with passion and heartfelt emotion. Composed with care, feeling, and sincerity, each song segues in to the next, like ripples in a pond. The underlying current of this album that ties it all together are the musings on the eddies of life. Memories recounted in a bluesy, upbeat sound with a somber dash of melancholy thrown in here and there to keep it humble.

Poor HouseÂ kicks off the album with a mournful blues riff with a smattering of keys that leads the song into an indifferent ‘so what?’ attitude. The entire band quickly jumps in on the rest of the song to really shift it in to fifth gear.

Inside OutÂ follows up on the intro track with a retrospective look at things that could have been, with a wistful crooning chorus that’s underwritten by the foggy bottom blues of the bass and punctuated with the crisp accent of horns.

Hollywood, the third track, is a typical tale of life out on the West Coast as told from the perspective of time. Lives coming and going, fortunes sought, battles fought, and ultimately a reflection of those who chase their dreams in the big city. The lively played instruments in this song belie the underlying truth that everything that glitters isn’t always gold

Can’t See Nothing GoodÂ follows up on the preceding track, perhaps from the vantage point of someone who might have chased those dreams and fallen short. One of the more bluesy and soulful tracks on this set, it’s slows down to a more soul-searching pace.

Oxnard CahuengaÂ tones it down even more with an ominous bell tolling in the background against the heavy laden bass before launching in to rapid beat, showcasing the trials and tribulations of life on the streets of North Hollywood. A tragic song of the senseless loss of lives wasted for naught.

Blue SkiesÂ lifts the mood of the album back up again at its midpoint. A light and airy song permeated in the forefront with flutes and hopeful piano, the vocals in this track drive home that sense that hope is never to be given up; to keep looking within and above to find the solace you need to carry on even when all seems lost. It’s a welcome change of pace to offset the emotional weight that led to this point.

Waitin’ For My BabyÂ gets down to it with a gritty, gravely vocalized prose coupled with a danceable rhythm that is certain to pull the crowds off the bar-stools and on to well-worn wood planked dance floors in road houses everywhere.

Livin’ The Blues. Playing on a more positive approach to a blues song than one would expect, the guitar really stands up on this one, with a non-stop melodic scale that emanates from start to finish, leading me to feel that the character isn’t really living the blues so much as enjoying them.

ForeverÂ croons out a soulful lament to one’s object of desire, capitalized with soaring vocals and some beautiful finger picking on guitar.

Get Along Lost GirlÂ seems to follow up on Forever with a scornful, matter-of-fact realization that love is being lost. Lay it on the line or get along with your indecision.

I’m GoneÂ follows the path of a man looking back at the carelessness of youth, fearless, unafraid, dealing with bad decisions made along the way, that portend the imminent dues to be paid for them. Seedy, sleazy, dark and dingy, it portrays a dark side of a life gone astray. One can almost see the demons dancing on the keys of the piano, the fire licking at his soul as his woes are recounted.

Late Night Phone CallÂ slowly winds its way in with an uneasy feeling of bad news to come. The horns and harmonica early on bring a sinking feeling of dread and unease right from the start. A song about mistrust and uncertainty, living in doubt of a relationship about to go sour.

Alone, the last cut on this release, sums up the ongoing feeling of life, loss, dreams and hopes that intertwine throughout the former tracks on this album. A fitting and morose end to this collection of songs, it leaves the listener with a thought; we are all alone and our lot in life is up to each of us to make what we will of it.

The music on this album is easily accessible without being condescending or playing to the lowest common denominator. The combined decades of talent from the members of this band really shine through in the tightness and well thought out arrangements. It’s effortless, it flows across the ears in a soothing, serene feeling of tranquility. It’s the sort of album you’d want to sit on your back deck, sip a cold beer and watch the sun set over the horizon.