“Love Is Gonna Bring You Home” is the first song to be released from the debut album from the Boom Boom Brotherhood. By Hutchinson’s admittance, “The song started out as a delta blues song in the style of Charley Patton. But once the band (Rick Baxendale on bass and Jim Brazendale on drums) got hold of it and the Marshall stacks were wheeled out it took on a different vibe.” 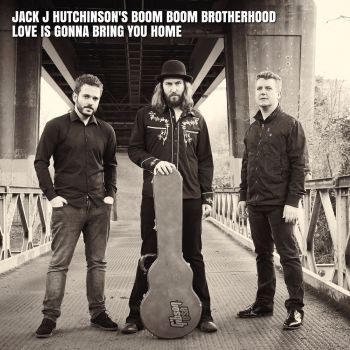 The vibe is very much on the heavier side of blues rock; the power trio encapsulates the sound of British Blues band’s like Cream and Peter Green’s Fleetwood Mac. Having gone through quite a dark period a few years back, Hutchinson writes from a particularly personal space. The passion exhibited throughout his delivery of the song, almost feels like it has become his mantra.

“Love Is Gonna Bring You Home” is an infectious number, with a driving rhythm and catchy fuzz-fueled guitar riffs which whet your appetite and leaves you wanting more. Unfortunately, we will have to wait until Autumn before we get our next taste of what’s in store when Jack Hutchinson and the Boom Boom Brotherhood’s release their debut album, Set Your Heart For The Sun.

You can find Love Is Gonna Bring You Home from iTunes, Apple Music, Spotify, and Amazon on 26 August 2016. The single is also available on a limited edition vinyl-style CD.