Last year Blues Pills released one of the stand out albums of 2016 in the shape of Lady In Gold.

The incredibly talented Swedish outfit have been relentlessly touring the globe in support of the record. Back in October of last year the group performed in front of a sold-out crowd at the beautiful Le Trianon Theatre in Paris. Subsequently, Blues Pills decided to use this opportunity in the French capital to record their new live DVD Lady In Gold Live In Paris. 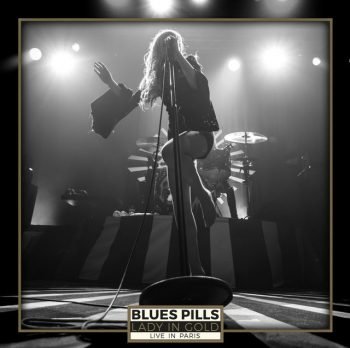 This stunning recording truly encapsulates the magic and the energy of a Blues Pills live concert. The ambience of the show is captured perfectly with the use of a multi-camera shoot. In places, the DVD incorporates the use of retro style film techniques which either adds a nice warmth or an old school black and white effect to the footage.

By and large, as you would expect with modern day recording techniques the majority of the scenes are rich, sharp and crisp. The film utilises both methods effectively. Furthermore, the wide shots of the venue capture the beautiful splendour of Le Trianon and the packed out Parisian audience in attendance.

The show itself traverses Blues Pills first two records, whilst centring on their latest offering. The set starts out with several rather infectious tracks from Lady In Gold before mid-set the band delve into their self-titled debut record with tracks like “Black Smoke” and “Little Sun” along with “Bliss” from their debut EP all featuring.

Whilst Blues Pills are incredible on record, their live show puts the band in a league of their own. When performed in concert these numbers take on a new life, as Blues Pills really flesh the songs out often resulting in extended jams. You can really hear the evolution of these phenomenal numbers during the course of the show. This is particularly the case with the likes of “Little Boy Preacher” and the emphatic “High Class Woman”.

Swedish chanteuse Elin Larsson captivates the audience with her incredible voice and frantic movement. Larsson is full of smiles as she prowls the edge of the stage. With so much energy put into her performance, it’s almost exhausting just watching it.

Blues Pills deliver a stunning take on the Tony Joe White classic “Elements and Things”, the band put their own unique stamp on the song and make it their own. Likewise, Larsson’s heartfelt solo performance during “I Felt A Change” is one of the many highlights of the DVD.

Throughout Blues Pills high octane set you can see just how much the band are truly enjoying the experience; they sink so much of themselves into the performance. This energy does not subside at any point in the show.

Blues Pills are currently one of the best live acts on the international touring circuit right now, and this live movie really captures the band in their prime.

Blues Pills will be back in the UK later this month as they hit the road as special guests to Black Star Riders on their “Coming Under Heavy Fire” tour and are not to be missed.

Lady In Gold Live In Paris will be released via Nuclear Blast Records on 3rd November.