Very sadly Jeff Healey passed away on March 2nd, 2008 following a three-year battle with sarcoma cancer. To coincide with Healey’s 50th birthday, a previously lost album of all new material will be made available to the public. This will be the first album of new Jeff Healey material in over 15 years.Â The album has been carefully restored under the guidance of the Jeff Healey estate. 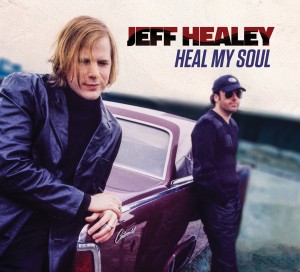 This album is not your typical remastered rarities, outtakes, b-sides and demos which we often see being offered by high profile artists these days.Â Heal My SoulÂ is like a time capsule, which dates back to one of theÂ most creative periods in Healey’s career.

The album is packed full of Healey dynamite material. Coming straight out of the blocks with the scorching guitar riffs of opening track “Daze of the Night” and the wah infused “Moodswing.” Although these tracks are interspersed with beautiful, heartfelt numbers like “Baby Blue” and “All The Saints” which really highlight Jeff’s phenomenal songwriting.

“I Misunderstood” is a blues masterpiece and one of the standout tracks on the album. The song tells a tale of love and loss,Â it also features some very passionate playing and hypnotic riffs from Healey. Jeff brings the funk with the likes of “Please” and “Put The Show on the Other Foot.”

To be honest, there isn’t a bad song on the album. Heal My Soul is a treasure trove of Jeff Healey material, it’s like receiving a letter from a long lost friend and a fitting testament to the great man himself. The album will be released via Provogue/Mascot Label Group on March 25th.