Black Stone Cherry approached the recording of Family Tree in a similar vein to Kentucky, in that the quartet opted to self-produce and track the album themselves. The band’s bold move certainly paid off on their last record, with Kentucky debuting at #5 on the Official UK Album Chart. 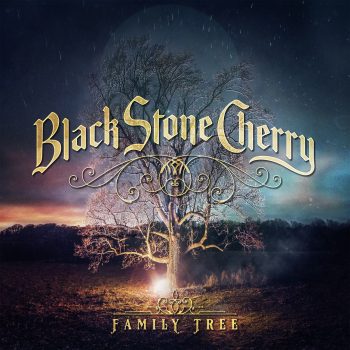 The group recorded Family Tree at Barrick Recording in Glasgow, KY; this being the very same studio where the group laid down their seminal eponymous debut album back in 2006. Black Stone Cherry’s new album is the product of the collective sum of the group’s wide range of musical influences.

The opening pair of songs on the record “Bad Habit” and “Burnin’” have been receiving a lot of airplay from the likes of Planet Rock radio and are unmistakably the type of hard rocking BSC numbers that their fans have come to know and love. Each track comes complete with screeching guitars, catchy hooks and a pounding rhythm which are all part of the band’s tried and tested formula.

However, the group have not been afraid to explore and experiment with their sound on this their sixth studio album. With the likes of the Honky Tonk “New Kind of Feeling” and the funky “Carry Me On Down The Road” the band projects a classic rock sound that conjures up images of rock greats such as the Rolling Stones. The tom-tom intro to the latter is reminiscent of the Stones classic “Sympathy For The Devil”.

Last year BSC released their Black To Blues EP which highlighted the band’s blues roots and heroes. Throughout Family Tree tracks such as the heartfelt, gospel-tinged “My Last Breath”, “You Got The Blues” and the groove-heavy “I Need A Woman” are a continuation of the band’s exploration of that genre. The four-piece also call upon legendary bluesman Warren Haynes on “Dancing In The Rain”, who adds his own distinctive touch to the record.

That being said, one of the stand out tracks of the album is “Southern Fried Friday Night”, which is so incredibly catchy and a real earworm; the chorus simply stays with you for days. With its broad appeal and country rock undertones, this song could quite easily crossover to become a mainstream radio hit.

Black Stone Cherry embellish Family Tree with a touch of funk-rock and soul in the shape of “James Brown”, which will inevitably be a live favourite, as the band hit the road in support of the album.

Family Tree is layered with many different sounds and with each track on the record the listener peels away a further layer to discover another BSC gem. With Black Stone Cherry’s latest offering the band has taken their key influences and respectfully paid homage to them whilst at the same time putting their own distinctive southern slant on this huge melting pot of sounds and hard rocking flavours to great effect.

Family Tree by Black Stone Cherry will be released on 20th April via Mascot Records/Mascot Label Group. The band will also be returning to the UK in June as direct special guests to Guns n’ Roses on the main stage at Download Festival.