Virginia natives, Mammoth Black, are making waves with their new album coming out on Dec 09, 2014. The new album, entitled Death Is Not Ashamed, has seven tracks that comes on hard and stays nasty through the playlist. Recording took place at Osceola Studios in Raleigh, NC with Dick Hodgin (COC, Velvet Revolver) to give this first offering a very smooth sound. 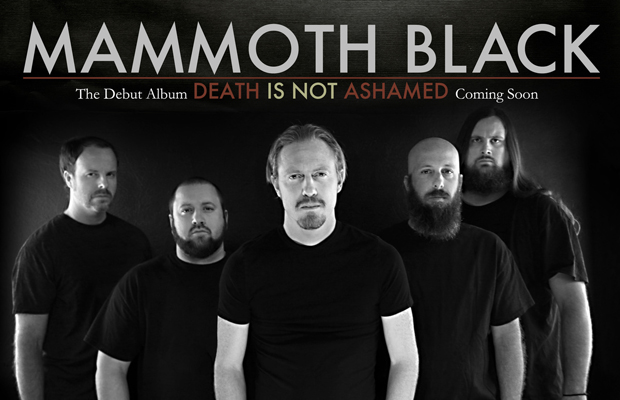 Mammoth Black is Brett Lloyd (vocals), Billy Strong (guitar), Ross Becker (guitar), Steve “Tombstone” Ross (bass), and Corbitt Carroll (drums). The vocals from Brett are guttural and unapologetic. Steve’s bass playing fits the slow grove and attitude in all the tracks. While Billy and Ross may share axe duties, their playing with and off of each other is flawless. Corbitt keeps the slow seething in check with his beat arrangements that have a reaction deep down inside the primal center of the true believers.

Their sound echoes back to a Pantera-like vibe but slower. Self-described as heavy sludge rock, the hooks are low and slow. This album is smoky in its content and is anything but forgettable. The only complaint might be that there weren’t more tracks on this release.

The guys will perform at their official album release show, taking place at Shaka’s Live in Virginia Beach, VA on Dec 12, 2014. The show will also feature bands Gritter, Irata, and Saltine. The group has plans to tour the U.S. east coast this Jan through Mar, stopping in select cities.