The release of Cheap Trick’s latest album may fall on April Fools Day, but the album is certainly no joke.

With a career spanning over 40 years, Bang Zoom Crazyâ€¦ Hello, which is released via Big Machine Records on April 01, will be Cheap Trickâ€™s incredible 17th studio album, and the first new music from the band in over five years.

Straight out of the blocks, the anthemic “Heart On The Line” comes hurtling at you like a freight train, with it’s driving rhythm and guitar wizardry from Rick Nielsen. 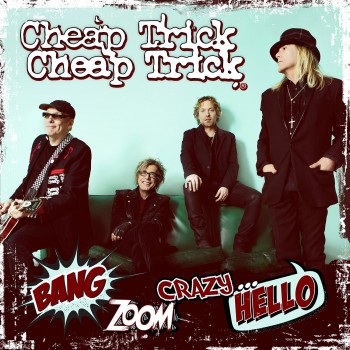 Kicking off with a rather tight, crisp drum groove from Daxx Nelsen “No Direction Home” will inevitably become a future Cheap Trick classic. Nelsen assumed his position behind the drum kit, taking over from Bun E. Carlos, who will reunite with the band for the Rock and Rock Hall of Fame induction ceremony on April 08.

Heartfelt tracks like the first single from the album “When I Wake Up Tomorrow” and “Sing My Blues Away” highlights the band’s songwriting ability. On the other hand “Blood Red Lips” is a tale of love and lust and has a glam rock tinge to it.

Adding some diversity to the album, the band takes Dobie Gray’s 60’s soul number “The In Crowd” and make it their own.

“All Strung Out” will inevitably be a crowd pleaser when the band takes to the road across the U.S. alongside the legendary Heart and Joan Jett and the Blackhearts, you can just imagine the crowd clapping along during the breakdown.

Cheap Trick’s latest offering is jam-packed full of infectious power-pop numbers encapsulating the band’s trademark sound which they have honed over the last four decades, and will appeal to both fans new and old.