Marty Friedman has contributed to music for years. Now the thrash Beast from the East returns to the U.S. to remind us he’s still alive.

From solo artist, to Cacophony, to greater fame in Megadeth, and then going on to pursue his own musical dreams, Marty Friedman is not one to stand still. Getting ready to start touring in the U.S. in support of his Prosthetic Records release, Inferno, he gave National Rock Review a few minutes to talk about the past, his present plans, and a surprise snubbing of bacon.

“I may not be the most famous songwriter in the world, but you know a Marty Friedman song when you hear it. It took me a long time to appreciate that.” ~ Marty Friedman

NRR: Thanks for taking a few minutes to talk to National Rock Review. You have always seemingly been busy in one form or the other, be it in the U.S., Japan, or some other exotic location. What have been some of the highlights of the past year for you?
Marty Friedman: Been an amazing year so far, touring South America was fantastic and this year in Japan has more than its usual amount of insanity between TV and music. I’ve been able to play with a lot of my heroes this year, actually tonight I will perform with Naruyoshi Kikuchi, who is the ultimate avant-garde modern jazz legend in Japan.
NRR: You are starting to gear up for support of your latest album, Inferno. What would you say about the CD to someone that hadn’t heard it yet to describe it to them?
Marty Friedman: If you like my music at all, you will love this album, as it is by far my deepest. If you disliked any of my stuff, you will probably hate the album, and with good reason!
NRR: How did your love of everything Japanese start and did it take a bit of time to feel acceptance when you first took up residence there?
Marty Friedman: I discovered so much music that I liked on my tours of Japan that the obvious step for me was to come and play my music here in Japan and see what happens. was always too busy concentrating on my next musical endeavor, so I never knew or was very concerned whether I was accepted or not. I worked pretty hard and got a little lucky.
MARTY FRIEDMAN – “INFERNO” (OFFICIAL MUSIC VIDEO)
NRR: How was the experience of writing new material with your old friend, Jason Becker, after so many years?
Marty Friedman: Great. It was similar to how we used to write. We would come up with lots of ideas, then I would arrange them. We`ve both come a long way since then so the music had to get better.
NRR: Since I asked about your writing with Jason, what is a typical writing session like for you especially on a solo project?
Marty Friedman: I`m constantly logging in new ideas, and when I have something that feels special, I start to think about a new solo album.
NRR: In your many years of being an influential guitarist on future thrashers and musicians in general, have you found more pleasure in being a solo artist or being part of a band in any form, in either hemisphere?
Marty Friedman: My solo albums always are a band effort, and when you see us live you don`t walk away only thinking of a solo guitarist, you wind up having your ass thoroughly kicked by a band. That is the way I want it to be. Band life is the most pleasurable of all musical projects.
NRR: How did the talks go down with Prosthetic Records in regards to previous solo works and even being swayed to release a new album altogether? Was there a certain moment that things just felt right and you knew it was a good fit?
Marty Friedman: Yes. They approached me about releasing my Japan only catalog and to be honest, they were by far the most enthusiastic label that were interested in my stuff. It`s kind of eclectic so I never expected a US label to be into it, but they were and I`m very grateful about that.
NRR: You’re going out on the road with Exmortus for support of Inferno. Had you heard of them before this tour, or are you just excited and happy for the adventure and the more the merrier?
Marty Friedman: Prosthetic recommended them and I liked what I heard. I think my fans will dig them.
NRR: When I ask what has been the hardest lesson to learn being an artist, what comes to mind for you first?
Marty Friedman: There is an unbelievable amount of prep for every little thing you ever do, if you want to do it well.
NRR: You’ve been around the world, played sold out venues, and have sold millions of records with your playing on it. In all that time, is there a moment that even now, when it gets brought up, you can’t help but laugh about it unabashed? A Spinal Tap moment if you will that you’d be willing to share with us?
Marty Friedman: There are so many Spinal Tap moments that none of them ever stand out. When you see a tit with your signature on it and don`t really think twice about it, you know you’ve been doing this a while.
NRR: I’m sure you’ve been asked this before but, is there a treasured guitar that has to be on the tour bus with you and what is it, if there is? 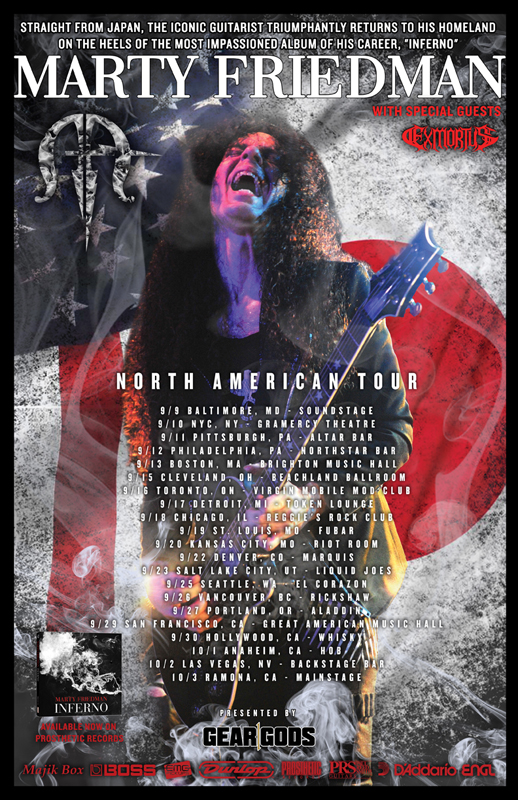 Marty Friedman: Actually not at all. I have no love or bonding with any guitar. It`s just an instrument, a piece of wood. All I care about is the musical content I am dealing with. Sometimes I envy these guys who have this beloved guitar or that one, but I just can`t imagine caring about that. I mean, shouldn’t all guitars be good enough to express yourself musically?
NRR: I know you first from a small band you played in called Megadeth. Is the way Rust In Peace has become an iconic work in the past twenty five years been one of your greatest works or greatest surprises? And if you don’t mind, how is your relationship with Dave after the last fifteen years of separation?
Marty Friedman: Every time I embark on any album, tour, project, of course I try to give it my ultimate best or I wouldn’t bother doing it at all. You never know what people are going to like or dislike and you can never control that no matter how hard you work. So if you like anything I’ve done, I`m happy about it! Who knew anyone would care x number of years later. [Mustaine] and I are still great friends, and I`m cheering Megadeth on in all of their pursuits.
NRR: Bacon, an electric guitar, or a woman? You can have one forever on a deserted island, one goes away after a day, and one never makes it to the island. How does it go down?
Marty Friedman: EASY! I eat bacon once a year at the most, not sure what the big appeal is about it. Easily live without it. The guitar goes away after a day, and the woman stays. If she`s hot.