Anthrax celebrates 30 years of thrashing and moshing, with the DVD of their live concert in Chile on May 2013.

Anthrax, a name that carries a sense of revulsion given it is taken from the deadly bacterium, “Bacillus Anthracis.” But when it comes to metal and punk, it stands for a band synonymous with American thrash metal. Since forming in 1981, Anthrax has cemented their place as one of the big four, which they share with Metallica, Megadeth, and Slayer.

Anthrax formed in 1981, in New York by Scott Ian and Dan Lilker. The early years saw many lineup changes, including drummer Charlie Benante, who permanently joined the band in 1983. In 1984, Anthrax released their first studio album, Fistful of Metal, on Megaforce Records. Lineup changes continued as Lilker left the band shortly after the album’s release.

This round of changes also saw the addition of Joey Belladonna on vocals and Frank Bello on bass joining Benante, making up the three Bâ€™s of Anthrax. While lead guitar has changed often, the rest of the lineup has been relatively stable. Belladonna left for a number of years returning in 2010. The current lineup is rounded out by Jonathan Donais on lead guitar, having joined in 2013.

The Chile on Hell DVD documents an amazing performance in Santiago, Chile. Most Americanâ€™s donâ€™t know the extent of South Americaâ€™s loyal metal fanbase. The audience was explosively charged, as evidenced by giant mosh pit, the fans packed in at the barricade, the way they responded to the band, and the way they sang along to the songs.

At one point, Belladonna lets loose with a single line, “Wasting your life…” The audience in unison and without hesitation bellowed across the arena, “No future bright, dancing on your grave, living like a slave. Someone should’ve said, N.F.L., efilnikufesin, N.F.L.” To this, the band seemed genuinely impressed. 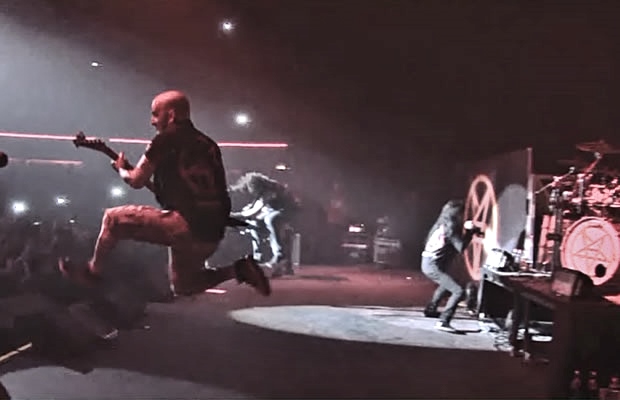 The concert opens with the first five tracks in order off Among The Living: “Among the Living,” “Caught in a Mosh,” “I am the Law,” “Efilnikufesin (N.F.L.),” and “A Skeleton in the Closet.” This was a great way to kick off the show, these songs each being fan favorites and from a time when Anthrax, the underground thrash band, was beginning to emerge from the shadows as a major billing national act.

As the concert opens to, “Among the Living,” the camera pans to the mosh pit which must contain 50 to 100 people, possibly more. In the middle, two individuals are waving lit road flares, filling the area with a bright red light and sending up a plume of thick smoke. It is quite a spectacle.

The set continues with a cover from the Ian, Benante, and Lilker side project, Stormtroopers of Death, as the band broke into “March of the S.O.D.”

Next was, “In The End” from the 2011 Worship Music. This was a special track to perform as it was dedicated to the memory of Ronnie James Dio and Dimebag Darrell Abbott. Graphics of the two musicians adorned either side of the stage. In many ways, Belledonna’s lyrical style on this song was reminiscent of Dio performing on stage. Also from Worship Music, they performed, “I’m Alive” and “Fight ‘Em ‘Til You Can’t.”

Going back to early Anthrax, the setlist included, “Medusa” and “Madhouse” off their second studio album released in 1985, Spreading the Disease.

Anthrax also performed “T.N.T.,” a cover of the AC/DC classic off their recent Anthems EP. As Ian described it, this was a song, “… we didn’t write but we wished we’d wrote.” As they broke into the chorus, you can see hundreds of fans on the main floor jumping to the beat and fists pumping in the air, chanting, “Oi, Oi, Oi, Oi.”

The band began their encore with a Benante drum solo. This segued into, “I’m The Man” with Ian and Bello handling most of the vocals. The crowd loved watching the two trade lyrics back and forth with Belledonna chiming in. This song has always been the perfect anthem for the band. “Yeah, now we’re Anthrax and we take no shit, and we don’t care for writing hits.” And yet, somehow it works.

At the end of, “I’m The Man,” Anthrax broke into an instrumental of the rhythm to Slayer’s, “Raining Blood,” to which Ian shouted over his mic, “We love you, Jeff,” This was an obvious homage to Slayer guitarist Jeff Hanneman who died in 2011.

From there, the band jumped back to, “Madhouse.â€ The crowd was in sync for this one as Belledonna held up his mic to the crowd, who erupted the chorus, “It’s a Madhouse!”

The concert ended with fan favorite, “Antisocial.” It only took a few bars strummed on a guitar for fans to know what was coming, as they began hum along with it. Belledonna waved a Chilean flag about, given to him by a fan. After the final song, the band lingered on stage, as fans chanted “OlÃ© OlÃ© OlÃ© OlÃ©…”

The concert ended as Scott Ian spoke to the hyped crowd, “you are the best fucking audience we’ve ever played to.â€ He finished up the performance reminding their fans “to always, worship music.”