Send the kids to bed and tell the teenagers to get the F out, because you have a date with Steel Panther tonight.

Grab yourself a cocktail, turn on the DVD player, and get ready for the best night in you’ve had in pretty much forever, because Steel Panther has released Live From Lexxi’s Mom’s Garage and itâ€™s an 80â€™s throwback hour of nothing but fun.

This release is the best thing youâ€™ll ever get from Steel Panther unless you’re watching from the VIP suite at House of Blues Las Vegas with Vinnie Paul, of course.

In a pre-political, everything always serious, everyone getting pissed off about something, world of 2016, Steel Panther brings back the feel good, Sunset Strip, Aqua Net, rock and roll world, we fucking need right now.

When the 80s and 90s hair band era emerged out of the overt seriousness of the post-Viet Nam era it was needed. The world embraced the fun-loving, often nonsensical vibe, of the “hair metal” bands.

When their time had run its course, and the “Seattle Sound” emerged, like it or not, kicking and screaming at times, it was the right moment for that as well.

But, as 2016 is off to a shooting start, and news feeds and television are ripe with political turmoil and general discontent, itâ€™s time again for the fun loving, hairspray embracing, ballad singing, genre to rise once again… and Steel Panther is here to make that happen.

Perhaps to some the cliched, possibly offensive, slightly mocking nature of Steel Panther might throw you off. Understandable. None of us wants our beloved genre mocked. Because as much of what these bands were is portrayed by the image, what really gets to us is that the music was good. It IS good. And we as fans do not want that tainted. 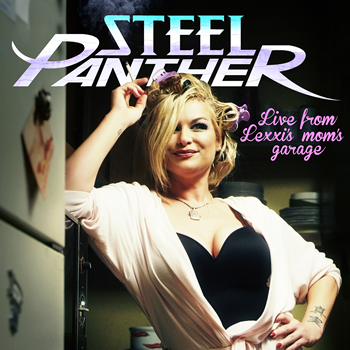 On the other hand, a lot of what we loved about that time, about that music, was its simplicity. The pure joy of it all. The sex, drugs, and rock and roll that we could attach ourselves to before real life took over.

That is what Steel Panther brings.

They bring it to their live shows as well as with the DVD they thrust into your living room.

If songs like “Fat Girls,” “Gloryhole,” and “That’s When You Came In” aren’t enough to keep you entertained, then original “Cherry Pie” girl Bobbie Brown playing the part of Lexxi’s Mom will.

That chick is hot. Always has been and always will be. Kudos to the guys for casting her in this role. Nothing says “Hot Rocker Chick” like Bobbie Brown does, 1990 or 2016; she kicks ass and everyone knows it.

Do we need it to be?

This DVD is staged as itâ€™s titled. As a semi-intimate garage band show, um, in a garage.

So yeah, maybe the guys wear wigs. At least, the tits on the chicks in the audience are real. Or paid for. Do we really care?

This release is fun. Buy it and watch it. Invite some friends over, or don’t, either way, you’ll be “Partying Like It’s the End of The World” either way!