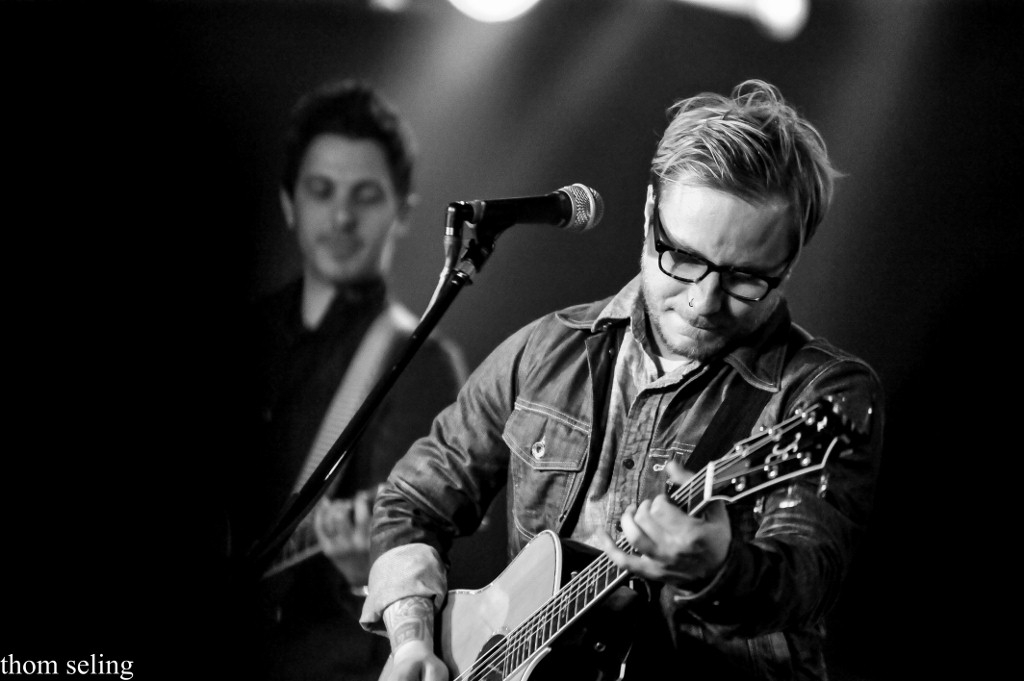 Billed as The Tennessee Tour, Zach Myers (of Shinedown) and Justin Moore (of Ingram Hill) came to the Machine Shop in Flint, Michigan on April 26th, 2014 for an evening of acoustic music.

Zach Myers is a musician with many talents. This Beale Street based musician has been an accomplished internationally touring blues musician since the age of 14.

He is the lead singer/guitarist for The Fairwell, a band which he founded. In Memphis, the band is considered a rock supergroup, of sorts, for the band members are also musicians in other well-known acts… Shinedown, Ingram Hill, Perspective, 12 Stones, and Saving Abel.

Myers toured with Saliva in 2004 and 2005 filling in on bass guitar. In 2007, he joined Shinedown as a touring rhythm guitarist later moving to bassist. In 2008, Myers assumed the role as Shinedownâ€™s permanent rhythm guitarist and later took over both lead and rhythm guitars following the departure of their lead guitarist.

As if his plate isnâ€™t full enough, Myers also plays in a side-project called Allen, Mack & Myers (A.A.M.) to which they just released a CD titled Shuffle.

In 2011, Myers appeared as guest guitarist at a Nonpoint concert and also as lead guitarist for Brother Caneâ€™s reunion show at the Dallas International Guitar Festival on April 15th, 2011.

Justin Moore is the lead singer of Memphis rock band Ingram Hill. They had a couple of top 40 radio hits with Will I Ever Make It Home and Almost Perfect, off their 2004 album, Juneâ€™s Picture Show.

The Machine Shop is known for hosting up close and personal sweaty rock nâ€™ roll shows however it was a completely different scene this night. Although it was still up close and personal, Zach and Justin brought an â€˜open micâ€™ coffee house atmosphere to the crowd of 300+ in attendance.

Zach and Justin took to the stage promptly at 10:00pm. Zach mentioned that he had last played the Shop in 2008 and it sure felt good to be back. He then told us that the night will go as late as we want it to, further stating that he and Justin had nothing going on tomorrow morning so they will gladly play as long as we will have them.

Both guys quickly broke into some fantastic acoustic guitar playing. It was amazing to watch these two incredibly talented musicians play their acoustic guitars, together, side-by-side. They were both highly energetic and really into their playing.

After a few songs, Zach mentioned to the audience that they really donâ€™t make a set list. They just kind of play what they want to. While looking over at Justin, Zach mentioned that the best thing about not having a set list is that they can be in the middle of playing one song, which will make him think of another song, so he will jump into that song with Justin having no idea of what he is going to play next. He said its fun to keep Justin on his toes. Both laughed and away Zach went into a song that Justin had no idea of which one!

They culled songs from their own catalog and mixed them with plenty of cover songs. Songs that everyone knew and loved. Some of my favorites were Small Town Saturday Night (Hal Ketchum), Much Too Young To Feel This Damn Old (Garth Brooks), Rocket Man (Elton John), 3AM (Matchbox 20), Forever And Ever, Amen (Randy Travis) and an incredible rendition of The Freshmen (Verve Pipe) which they turned into With Or Without You (U2) without skipping a beat!

Not only did these guys play their hearts out with their guitars but also Zach would occasionally switch to playing the keys. One of the most amazing high points was watching Zach play 3AM while sitting down at the keyboards. Zachâ€™s voice soared over the piano mesmerizing everyone in attendance.

Zach and Justin would interchange playing their guitars while switching up the vocals between the two of them. Zach played the keys on a few songs and would tell stories. Watching these guys play together gave me the feeling that they truly love playing together. They played off of each other so well that you wouldâ€™ve thought they had played together their whole life. They loved interacting with the audience and would include them with their story telling.

Although the crowd erupted during the times they played a couple of Shinedown songs, the audience seemed to really love what these guys were doing. Everyone was singing along and having a fun time. Heck, I think this is one of the more fun shows I myself have seen at the Shop!

True to their word, the show went late into the night, as the audience was not willing to let them stop. They ended up playing for two and a half hours without even taking a break. Zach and Justin never left the stage nor did they do an encore. They stayed on that stage for 150 minutes and played their hearts out!

As if that wasnâ€™t enough, Zach and Justin came out to mingle with the audience. They signed autographs, took pics, joked around, and told stories long into the rest of the night. Everyone had gotten his or her moneys worth at this one!

Our photographer, Thom Seling, was on hand to capture this magical moment. Here are his images from that night.