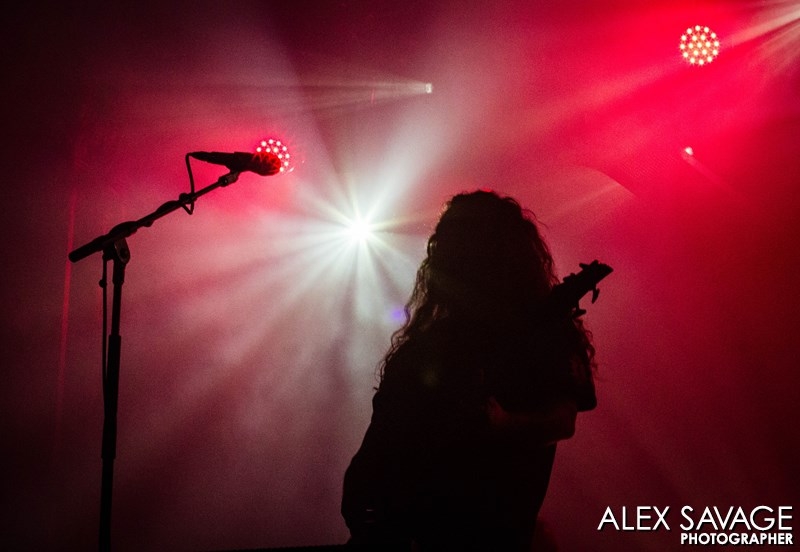 Well, there’s nothing you can really say about getting the honor to not only listen to and watch, but to photograph SLAYER! Â Unless you’ve been living under a rock or on some remote outpost North of The Wall, then you know who they are.

What most people REALLY want to know is if Slayer still rocks and if their touring guitarist Gary Holt (Exodus) is able to fill the very large shoes of the fallen legend we metal fans know as Jeff Hanneman. Â The answer is no. Â No, in the sense that no one will every be able to replace Hanneman and that no one guitarist ever sounds like another no matter how they try to imitate the masters. Â  What you should know is that Gary Holt not only brought the noise, but KILLED it.

The set was tight and sounded great from all sides of the venue. Â It was pretty obvious that all the die hard Slayer fans in the audience lapped it all up with a very greedy spoon and not once did I hear grumblings of disappointment from anyone.

I’ve heard some people say that since Hanneman’s passing, Tom Araya and Kerry King should just give up the ghost and let Slayer fall into metal obscurity. Â But honestly, Araya can still sing and scream with the best of them and King is still an amazing guitarist. Â Ultimately, that decision is up to the band and not the fans.

I know that I enjoyed the hell out of the show and, to be honest, I can’t even remember all those cool things I probably should because I was too busy headbanging after I finished shooting. Â I can tell you that I was one of two ladies in the photo pit and that there was so much testosterone in the air I think I grew some chest hair. Â Slayer fans are totally fun if not entertainingly self destructive. Â I would lecture a few of them on the finer points of pacing your alcohol consumption…but after all, it is SLAAAAAAAYER!

As the show let out, the ‘SLAYER’ chanting began and didn’t end until everyone was out of the venue. Â If this country ever did end up in some horrible strife, all you have to do is call an army of Slayer fans to the rescue. Â They’ll come raining down over the land like a horde of Orcs and get the job done in a jiffy.

It was my first time seeing Gojira live and I am not as familiar with their catalog as I probably should be, but after hearing them I plan on investigating them further. Â I’m a huge Alcest fan who are also from France and I am personally very happy that some really great metal is coming out of that country. Â I hope to hear more in the future and to visit France once again. Â So, for now I’ll get myself more educated on Gojira and if you have no idea who they are at all, I suggest you do the same.

Unfortunately, I did not make it to the venue in time to catch the first support band,Â Â 4ARM,Â but I heard the last song of theirs and because I was so distracted trying to get into the venue and keeping track of the people I was with among the hordes, I couldn’t tell you what they sounded like other than that they were metal. Â I could have done a half ass attempt at looking them up and educating myself before writing this review, but it wouldn’t seem like I really cared, now would it? Â I’ll get there eventually and if they are good enough to be touring with Gojira and Slayer and if they end up being some huge headlining band someday, I’m sure we’ll cross paths again some day.