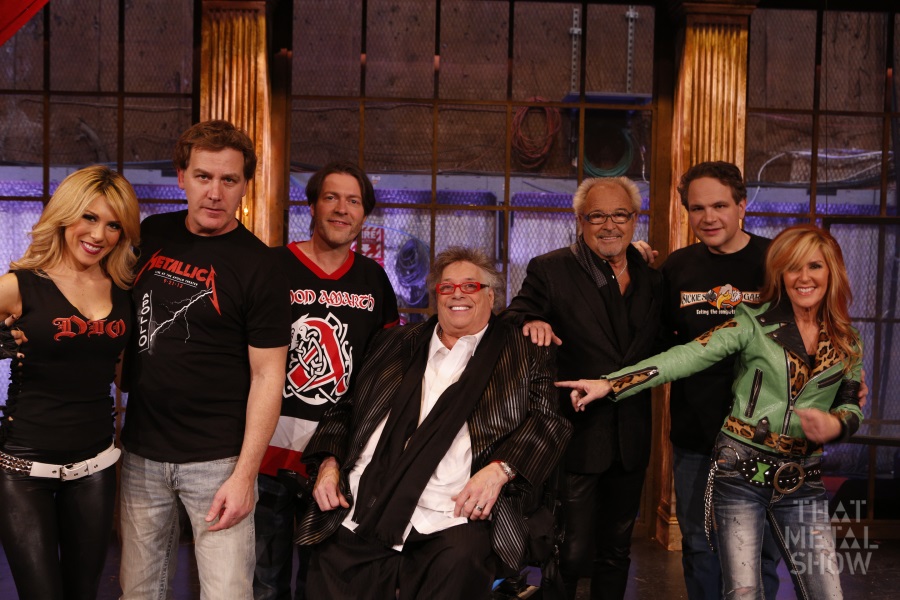 VH1 Classicâ€™s centerpiece in original programming â€œThat Metal Showâ€ returns this week for its seventh episode of Season 13 on Saturday, March 1st at 11:00PM ET/PT. The acclaimed hard rock and heavy metal talk show is hosted by Eddie Trunk, Don Jamieson, and Jim Florentine. This weekâ€™s episode takes a unique turn grabbing two of the biggest names in classic rock: Mick Jones, chief songwriter and founder of one of the most successful rock bands ever, Foreigner, and Leslie West of the formidable hard rock band, Mountain. Mick Jones gives an update on all things Foreigner and recounts how surreal it was when the band became one of the biggest bands in the world upon their very first album release. Leslie West, the first TMS Woodstock alum, shares his east coast wit and charm and generously gives Eddie Trunk a kick ass gift. We also see Mick and Leslie â€œPut It On The Tableâ€ with some surprising answers.

Guitar legend Lita Ford stops by to perform as the guest musician making her the first female performer to take over the job in the showâ€™s 13 seasons. Lita Ford also holds the distinction of being the first-ever guest on â€œThat Metal Showâ€ and discusses having both crowns to her name. In addition to these show firsts, Lita wows the crowd with her riffing ability and shows why she is still a favorite to this day.

Episode 7 of the latest season features a â€œMetal Modemâ€ segment connecting the hosts with Marty Friedman, former guitar ace of Megadeth. Marty checks in from his home in Japan and gives an update on his latest projects including dropping hints that he will embark on his first tour of the US in some time. The always fan favorite â€œStump The Trunkâ€ segment knocks the recently victorious Eddie Trunk back down a few spots, even though Eddieâ€™s own attorney wasnâ€™t able to stump him.

Since the January 18th premiere of Season 13, â€œThat Metal Showâ€ continues to bring their audience the biggest names in hard rock and heavy metal. A number of guests are confirmed for the upcoming episodes including Mick Mars of MÃ¶tley CrÃ¼e, The Winery Dogs, and Vinnie Paul, formerly of Pantera. Also confirmed to appear this season will be original Kiss members Ace Frehley & Peter Criss, and guitar genius Joe Satriani. Dee Snider has also been added to the list of guests coming up this season.

Known for having the best musicians in music perform each week on â€œThat Metal Show,â€ Season 13 continues the trend with the likes of these TMS alums: Charred Walls of the Damned drummer Richard Christy, Trans-Siberian Orchestra guitarist Chris Caffery, Cinderella front man Tom Keifer, and the guitar virtuoso Yngwie Malmsteen. Each of these artists will make the new season the most musically diverse and rockinâ€™ of shows in â€œThat Metal Showâ€ history.

This season marks some monumental changes for the show as it returns to New York City for Season 13. Previously the show was taped over several days of one week out at Sony Studios in Los Angeles. The new season is shot at Metropolis Studios on Tuesday nights for broadcast that Saturday. Season 13 also consists of 12 new episodes making it the longest season in the showâ€™s history. Fans can also catch the complete season 12 and brand new exclusive bonus clips at ThatMetalShow.VH1.com and in the new VH1 app. New episodes of season 13 launch on the web and in the app every Sunday morning following the showâ€™s on-air premiere.

â€œThat Metal Showâ€ premiered on VH1 Classic in November 2008 and since has become the only place for all things hard rock/heavy metal on cable television. The show has been visited by some of the biggest names in music including members of Black Sabbath, Aerosmith, Pantera, Anthrax, Kiss, Iron Maiden, Metallica, Pearl Jam, QueensrÃ¿che, and Heart.

VH1 Classic brings you the best metal, rock, soul and pop from the â€™70s, â€™80s and â€™90s. The channel features the gods of rock â€“ from Black Sabbath, Metallica and Iron Maiden to Stone Temple Pilots, Pearl Jam and Dire Straits â€“ in marquee concerts and music specials, and of course, tons of classic music videos. Recent big events include â€œNational Metal Dayâ€ (11.11) and â€œMetal Evolutionâ€, an 11-part documentary series on the history of metal. When it comes down to it â€“ all music should go to 11.