With Don Broco’s latest offering they’ve smashed down the walls between a wide variety of musical styles and influences whilst at the same time taking risks and challenging themselves to push their own creative boundaries. This bold move has certainly paid off for the band. 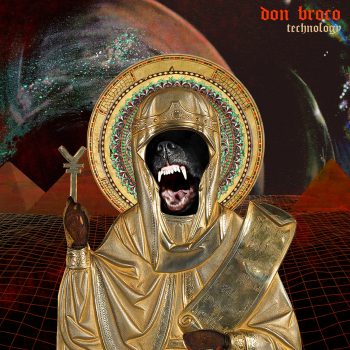 For their latest long player, Don Broco enlisted the services of world-class producers Dan Lancaster (Blink-182, Good Charlotte) and the Grammy Award-winning Jason Perry. With Technology Don Broco covers a lot of ground both lyrically and musically. Whilst grappling with subjects such as current affairs, relationships, privacy and the music industry the group battles with a vast sonic landscape. Each track on the record has a different blueprint.

Having been previously released as singles the first five tracks on the album will come as no surprise to the group’s fans. Like many of the songs on the album, the title/opening track itself is incredibly infectious, packed full of catchy hooks, crunchy guitar riffs with an underlying hard-hitting rhythm. On the other hand, Don Broco switch gears with the bass-heavy “Stay Ignorant” and the hard rocking melodic masterpiece that is “T-Shirt Song”.

This record is a real game changer for Don Broco. The likes of “Come Out To LA”, “Greatness” and “Tightrope” have mainstream appeal with the added bonus that they could just as easily be playlisted by the likes Kerrang, Scuzz or Planet Rock, which in itself is a real achievement.

Within the 16 tracks on the record, Don Broco frequently traverse multiple genres within the same song; blurring the lines between contemporary rock/metal and electronic music whilst sometimes incorporating elements on 80’s synth pop/rock and RnB. With this refreshing and creative approach Technology maintains the listener’s interest from the off; you don’t find yourself skipping songs, but instead listening to the album in whole. There are some real earworms on this record.

Technology sees Don Broco cement their major league status with undoubtedly their most creative and genre-defying release to date whilst at the same time staying true to their roots. Covering such a vast musical landscape Technology will inevitably appeal to the band’s loyal following and music fans alike.

Following the band’s recent sold-out performance at London’s Alexandra Palace Don Broco’s fans will have the opportunity to hear some of the group’s freshest cuts when the four-piece hits the road across the UK throughout February.

Technology by Don Broco is out now via SharpTone Records.