The Hentchmen release a new video for “Frontside Disaster,” in anticipation of their upcoming new album.

Detroit has always been a breeding ground for great musical talent. Just hearing the word ‘Detroit’ brings forth images of Bob Seger, Kid Rock and the White Stripes packing stadiums the world over.

What people don’t think about are the many underground bands that are just as deserving. One such band is The Hentchmen. This indie garage rock trio has solidified their place in Detroit history, bringing forth 25 years of playing music together.

Not only are John Szymanski, Mike Latulippe and Tim Purrier celebrating 25 years as a band, but they also have an upcoming new album to go with it. A record release/25th anniversary show is tentatively scheduled for December 22nd at the Outer Limits Lounge, a dive bar at the border of northeast Hamtramck and Detroit.

Having closed its doors in 2010, Symanski purchased the business in 2012. Using the Outer Limits Lounge for band rehearsals and get-togethers, Symanski recently turned it back into a legit bar/club as well as a makeshift recording studio. Symanski also started Outer Limits Lounge Records, which the band will be releasing their upcoming album on.

The band has just released an official video for the first single, “Frontside Disaster.” Filmed and edited by Marcus James Long, the video features the band’s guitarist, Tim Purrier, showing off his incredible skating radness at a local skate park. Long also makes an appearance in the video doing an Ollie over the Farfisa keyboard at the beginning. 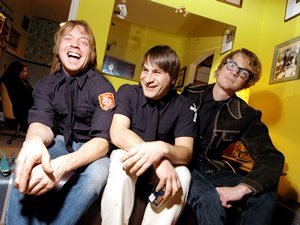