Rhythm guitarist Ted Aguilar from the band Death AngelÂ talks with Howie D., about how the band came to reforming back in 2001, the relevance of 80s thrash and metal to the current wave of metal fans, being with a label like Nuclear BlastÂ who “get’s it,” and an update on some new material and more…

Death Angel has been strong since reforming for Testament singer Chuck Billy’s cancer benefit back in the summer of 2001. What was intended to be a one-time reunion show, turned out to be the catalyst for the band getting back together to continue their run as one of thrash metal’s favorite sons. The band’s latest album, The Dream Calls For Blood, got rave reviews from fans and critics alike, and they plan on having new music by late 2015 or early 2016. Death Angel is getting ready to hit the road with Cavalera Conspiracy and Corrosion Of Conformity for some spring dates before heading off to Europe for a summer tour.

The Dream Calls For Blood, the most recent album from Death Angel 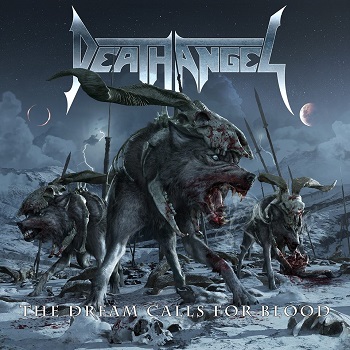