We’ve said before we keep an eye on hometown favorites and these guys definitely fall into that category. Seeing friends blow up is amazing, Kitties.

The guys in this band of unsigned, kitten loving, misfits of A War Within are Spencer Maybe (vocals/bass), Armando Castano (vocals/bass), Nikhil Rao (guitars), Jereme Stebila (guitars), and Angelo Walker (drums). Their newest release, Believe, came out on Mar 08, 2016 and is doing quite well on the charts. The guys are currently out on tour with Miss May I, Blessthefall, The Plot in You, and Sirens & Sailors. Later this month the band will head out on their own for a few confirmed shows.

We got a few minutes to sit down with A War Within’s own Spencer and grilled him on a few tough, but fair questions about kittens, dodge ball leagues, and the new record. So, pull on your AWW jersey and settle in for a good read. Head over to our Facebook page and throw us a ‘Like’ or tweet at us on Twitter and let us know your thoughts.

NRR: Thanks for taking some time out to answer some questions for National Rock Review, it’s been a minute since we talked to you guys last. What’s been going on with the band, A War Within, so far in early 2016?
Spencer Maybe: We are currently on tour with Blessthefall, Miss May I, The Plot in You, and Sirens and Sailors.
NRR: You had a new album come out March 8, 2016, Believe. What can fans new and old expect from the new kitten approved material?
Spencer Maybe: â€˜Itâ€™s paws up cat-tasticâ€™ says most kittens. It’s a huge change from Sons of Saturn. It has a heavier vibe but also still has a good variety of sounds. A different mixture of alternative rock and metalcore. 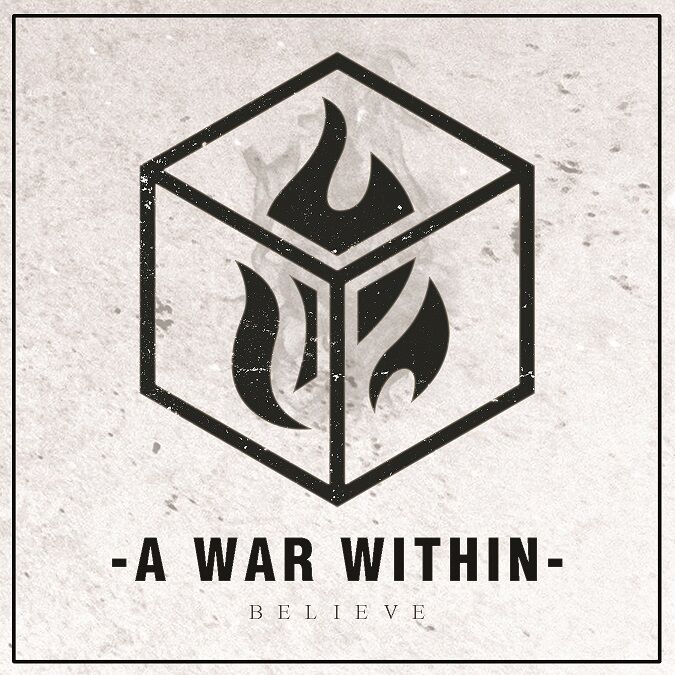 NRR: You said you guys are out on a full US tour with Miss May I and Blessthefall. How are things so far and how many hotel pools have you been in already?
Spencer Maybe: Well weâ€™ve broken down four times and been in a total of three hotel pools! Other than hotel pools and van/trailer breakdowns, the experiences so far unbelievable, especially with friends like Miss May I and The Plot In You. This is definitely the greatest tour weâ€™ve ever been on. Itâ€™s pretty amazing to meet all the new fans as well as the old ones we haven’t met before.
NRR: You have gotten some pretty big eyes on you since the last album came out. Is the national attention a little surreal to a one time small Detroit, MI local band?
Spencer Maybe: I think it always is to see people around the country excited for you to come to their town. Being at the epee-center of the action makes it harder to see what’s really going on out there. It is super enjoyable to see all the reactions that our hard work has yielded. We’re just too stoked for the future.
NRR: We’ve recently lost a few big names in music starting with Scott Weiland and Lemmy to Bowie and Fry passing as well among others. Did any of those very talented artists have any influence in your own careers?
Spencer Maybe: I think Bowie was most influential compared to the rest. I grew up hearing his music on the radio and even seeing him in Labyrinth and The Prestige. It is a very grounding fact that one day you come into this world and then another day you leave, so you gotta make the best of it while you can. No matter where your journey takes you one day it will end. So enjoy it because to me that’s all life is, a journey.
NRR: With the mindset of the band being what it is, would playing behind chicken wire on a small stage to a packed bar, i.e. Roadhouse, be more rewarding then playing in front of sixty thousand in a pretty sterile Ford Field setting?
Spencer Maybe: I think performing “On The Road Again” while beer bottles are being thrown at you is still probably equally as cool as playing in front of a huge stadium in front of 40,000 and 50,000 people. To me, it’s not about the size of the crowd it’s more about the intensity of the show. Whether it is five or 5,000 I care more about the vibe from the stage than the size of it.
NRR: Being in a band is like being a pro athlete, you need a certain amount of confidence in your sound or ability. What would be one or two things that you’re really proud of in how your vibe comes across?
Spencer Maybe: The thing we’re most proud of is a band is our ability to connect to our fans on and off stage. We surprise people with our performance as well as when we’re done we like to talk to, shake hands, and hug everyone that’s at the show. Not many bands do that nowadays whether they’re too awkward or egotistical. We just really enjoy every part of what we do. People that support us get everything we have to give them at shows because they deserve it from us. It is why we take all the time we can to make their time with us the best.

“The confident swagger that accompanies their live show is only half of the story however; A War Within have shown themselves as band who relish the meet & greets and fan interaction as much as their studio time and touring â€“ something which undoubtedly shines through with the atmosphere and energy at a show.”

NRR: More bands seem to be doing VIP deals on tour or really being creative with their merch. How important are these things for you not just as a revenue stream?
Spencer Maybe: I think those things are great for creating a desire for whatever the grand prize is for being a VIP. Most bands just have you spend time with them for VIP access. I think a VIP time [needs] to be a little bit different. We’ve been talking about more exclusive things and to us we want our VIP to be more from the heart rather than [just] a paid time with us. It’s crucial to treat the people that are willing to go above and beyond for us in the same manner. So, you’ll just have to wait and see once we do our first VIP access to see what we have in store.
NRR: Is there a moment, that thinking back on it now, in the your career, with the band now, that you can’t help but still feel a tad bit embarrassed about, makes you laugh about despite yourself, or just still makes you shake your head in disbelief? A Spinal Tap moment if you will, that you’d be willing to share with me?
Spencer Maybe: We’ve definitely played a few shows they were completely sub-par. I was surprised people didn’t leave the venue entirely. Not everybody has a great day and sometimes bad days can just get even worse. This tour is a pretty good one. Even with the fact that even great things come with some bad things at times. This is the only tour where we have broken down four times in two weeks.
NRR: Do the big festivals like Warped Tour that are coming up soon, signify a milestone if a band like you guys are offered a spot?
Spencer Maybe: I think everyone would agree that Warped Tour would be a huge milestone for any band. Just playing our hometown Warped Tour was amazing. I don’t know many bands who have played on the Ernie Ball stage for even one day let alone been on the whole tour for a year. I think just to make it through Warped Tour would be an amazing feeling whether you’re on main stage or not because I hear all the horror stories that is involved with Warped Tour. It doesn’t sound like an easy task to complete.
NRR: How does the group go through the writing process, is it all one person doing the lion’s share with help or is it a group effort from start to finish?
Spencer Maybe: It definitely varies from song to song, but for this record, considering losing members halfway through it has been mainly me and Armando writing the bulk of it. Since the joining of the new members we developed an integration as the later songs occurred. At the end of the day whether is one person or all five of us to write this, we all input our $0.02 into each song.
NRR: Does the ability to switch roles on stage give flexibility to what you can try out at rehearsal?
Spencer Maybe: Sometimes rehearsals are not only just me and Armando switching but sometimes everyone will pretty much switch positions just for fun. You never know when somebody’s vocals are going to cut out or something of that nature, or when someone’s going to be sick. We’re all pretty prepared if a member has to bow out except for drums.
NRR: When you are out on the road playing the bigger lineup shows, have you picked up any good habits to incorporate in your own routine or seen things that you made a mental note never to do yourselves?
Spencer Maybe: We definitely watch all the bands we play with. I’d like to pick up little techniques there. We also enjoy what they do on stage. We made quite a few of our own stage techniques ourselves and from watching other bands. I don’t think I ever want to see the day where I’m completely satisfied with my on stage presence and showmanship.
NRR: When will we get the official AWW Dodge-ball League?
Spencer Maybe: We’ve been talking for a quite a while about setting up a true dodge-ball tournament. Just with the record and then the tour going on right now we haven’t really had the time to set it up. I think once we have enough people truly interested and actually wanting to play dodge-ball, then the tournament will occur as far a league, that will have to come later. 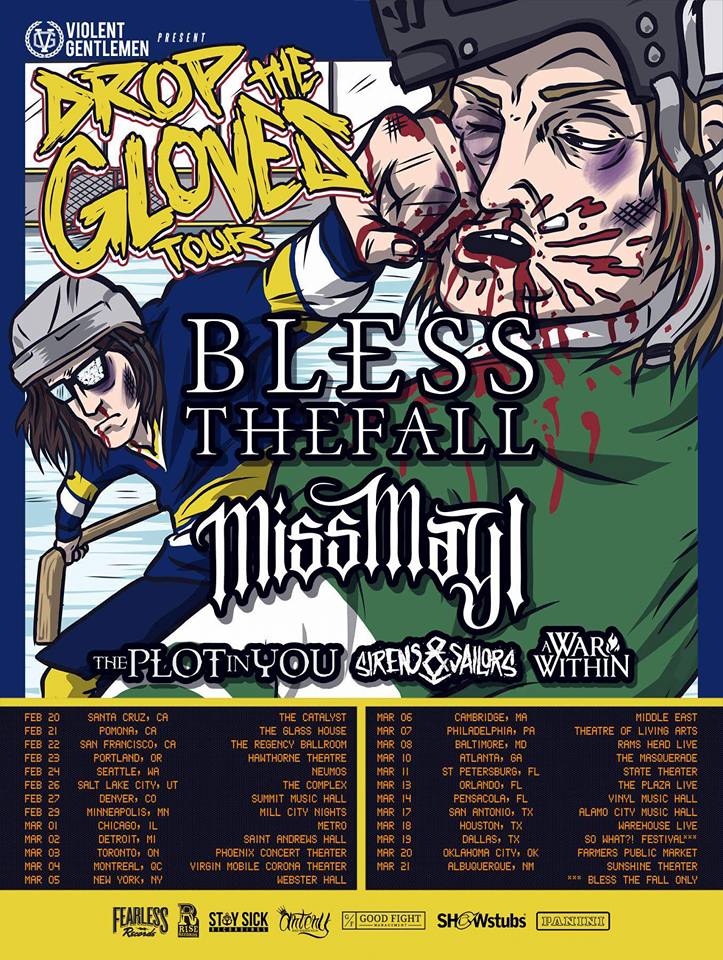