Howie D. from National Rock Review recently caught up with Marcel “Schmier” Schirmer, frontman for German thrash legends, Destruction. They talked about being an early influence on the heavy music scene and their label as one of Europe’s “big four” of heavy music. Schirmer also discusses his proudest moment for the band and recording the new album at several different studios at an unhurried pace.

Destruction got its start back in 1984 after two years of sporting the original name, Knight of Demon. Breaking out around the same time as fellow German thrashers, Kreator, they played a huge part in making people aware of the heavy music scene that was blowing up in the country. Once word of Destruction hit the US market, the rest of the world quickly followed.

Destruction is getting ready to release their 14th studio album, Under Attack (via Nuclear Blast), and tour dates are coming together for Europe and South America. The US can expect a visit around the end of the year or early in 2017. It’s good to know we can still count on Destruction for the music we’ve come to love and appreciate from them, and this new album should prove just that.

The intrerview with Schmier from Destruction:

Under Attack, Destruction’s new CD which will be available May 13th 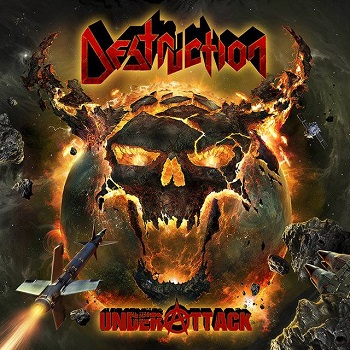