Two parts of the driving force in The Convalescence sat and talked about the road, how important band product is, and the writing process.

NRR: Tell me how the band got named, The Convalescence, and what does it mean?
Keith: The band was actually named by our original drummer who left the band after one practice, We had some other ideas we were throwing around in the first band meeting but this one just seemed to fit. It means the healing process which given that most of the band had issues such as problems with drugs or drinking or in some cases even being homeless it just seemed fitting.
Katie: The name was decided on before I was in the band, but since it means the healing process, it did seem a fitting name for those involved. I hit a personal rough patch and I had always turned to music to find direction.
NRR: Describe your sound for those that might not have heard any of your music before.
Keith: We’ve been classified as symphonic Deathcore. We blend together elements of Black Metal with the symphonic style keyboard parts as well as a heavy influence of Deathcore breakdowns and Death Metal riffs. The best way to say it would be The Convalescence for fans of Winds Of Plague, Suicide Silence, Whitechapel, The Black Dahlia Murder, and Cannibal Corpse.
Katie: I’m terrible at genres, and really I have to say I rely on what our fans believe we sound like. We do have some symphonic tones with the keyboards, but overall we are able to blend heavy riffs, deep powerful vocals, breakdowns, clean vocals, synth work together to form what our fans have called symphonic deathcore. I”d have to agree with Keith on the bands he mentioned, as for our fans have mentioned those bands to us.
NRR: You guys did some pretty crazy touring last year, what kind of plans do you guys have to tour this year?
Keith: As of right now we have even more touring lined up than we did last year including several festivals around the United States.
Katie: More touring, and definitely more surprises for our fans.
NRR: Your latest release is The Process, tell me about the album and maybe something that you would like a new fan to take away from the CD? 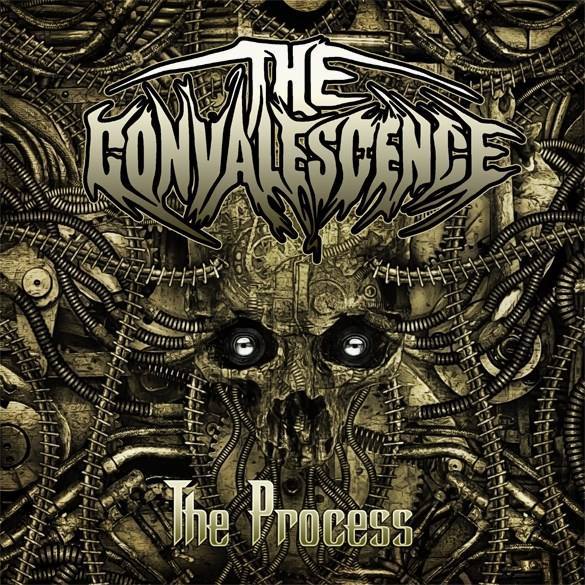 Keith: The Process was written based off of things we were going through in our personal lives, I feel that a lot of the issues covered in the lyrics on this album are feelings shared by a lot of people around the world and we’ve been told over and over at shows and through our social media sites that people related to the lyrics and they meant a lot to them. People can take the words however they wish to take them.
Katie: The album was definitely a process for us and the completed album turned out better than any of us expected. I feel that the album has a story behind it, yet the story is different to each person on how they want to interpret it. It’s amazing to hear how our fans have be able to relate to the album.
NRR: You guys had your share of Spinal Tap moments just on the last tour alone. Give me the funniest or just the plain saddest moment that makes you laugh or shake your head to tell even now.
Keith: These kind of moments seem to be almost constant with this band, I’d say the saddest moment was wrecking our van in New Mexico for sure. But the crazy part of that was the recovery….We walked about 2 miles got a hotel room and stayed up all night and early morning making phone calls until we had it set up for members of Katie’s family came to pick us up in Albuquerque,NM with a car and a truck. The truck pulled the trailer and carried a few members and the car took the rest of us. Stopping that night in Las Cruces, NM to play a show then leaving to go directly to where her family was from in El Paso, TX where we bought a van off of Craigslist the next morning and were able to play the Metal Reigns In The Southwest Festival then made the 8 hour drive to play another show the next day in San Marcos, TX with a broken steering wheel and an unregistered vehicle. Long story short we destroyed the van and with the help of friends and family plus a large amount of us being completely insane we never missed a show.
Katie: Sigh, Yes the van. I’m just so lucky we had the help from family and friends. There are all those little moments that you’d only believe if you were there sort of thing. My favorite memory was on the As Blood Runs Black Tour. We had to make a 14 hour from San Francisco to Seattle, in about 12 hours. Loading our trailer was impossible being parallel parked between cars, our guitarist was in a lot of pain from a toothache, the drive was so long and had to be done in such a short time we only had time to stop for gas and nothing else. We arrive to Seattle in the rain and mud, hungry munching dry Ramen and actually got there before most of the other bands. With the bad weather we thought it was going to be a slow night and a small crowd, we were completely wrong. The line to get in reached around the entire building, and for being one of the opening bands on the package, we were so thrilled to be playing in front of a packed audience!
NRR: When new songs are being written, is there an official method to the madness, or does a core piece of the song get done and then everyone helps to finish it off? How does it go down?
Keith: Every song is a little different, Some songs a member will write the whole song on their instrument and everyone else writes around and sometimes we sit down in the studio as a band and puzzle piece together ideas, So I guess there is not an official method.
Katie: In all honesty, each album has been written differently. As of late the members are not even in the same state so getting together and jamming is out of the question. Someone writes a good riff and scratch drum tracks, I write keyboard/synthesizer parts and then Keith writes vocals. Well at least that’s how six out of ten songs on the album were done. The other four were a result being snowed in a studio for a week in the worst/best crunch time ever… So who knows how we write on our next album.

The Convalescence – The Human Disease

NRR: There is a lot of downtime between gigs, what do you guys do to stay occupied from one show to the next?
Keith: Since we have members based in Ohio, Nevada, Texas, Louisiana, and Wyoming we are not able to get together for anything except tours. So when we are off the road we all get day jobs to recoup some money, pay our bills, repair our tour vehicle, restock merchandise, book more tour dates, and work with our label and management on a game plan for the next run of dates.
Katie: We do go back to our home states and work to recoup money, square away debts and get ready for the next tour routing. As for the unfortunate times a show cancels or something happens and we have an off day in between shows during a tour we usually attempt to sight see things in the area, or scrape up enough money for a cheap motel for a shower and WiFi.
NRR: How important are the social media sites along with the music sites for the ability to connect with fans all across the country and beyond for you as a band?
Keith: They are very important, it gives the fans easy access to contact the band members if they want to and also makes it easy for us to make announcements that everyone can see and follow what we’re doing in our off time, in the studio, or on the road.
Katie: Social media is the absolutely most crucial thing to connect with fans, book shows, promote, get feedback from fans. Of course leg work of talking face to face is paramount to knowing the audience, at least exchanging Facebook names you can tag them in an upcoming show in their area.
NRR: Every band has a merchandise table to one extent or another at their shows. How important is the sale of band merchandise to the survival of smaller to medium sized bands? 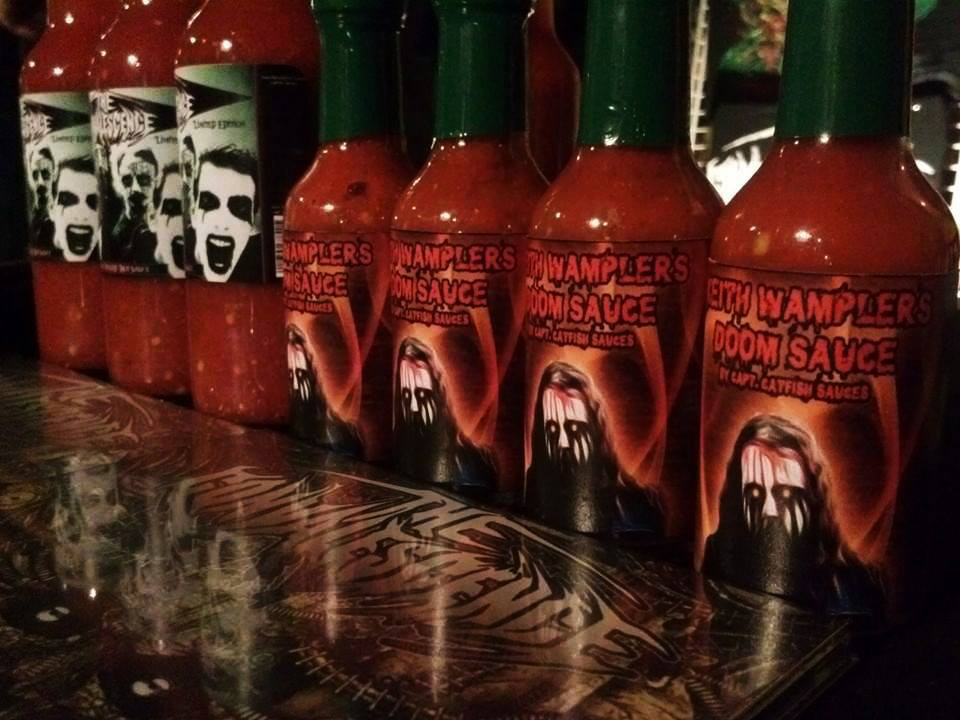 Keith: It is one of the most important things for a small to medium sized band, for example a lot of the time when we do bigger tours or festivals we don’t get paid at all so the only way we can get through the dates is to sell merchandise.
Katie: Merchandise is the thing that fuels smaller bands. Smaller bands don’t necessarily get paid from venues, and unfortunately, kids have admitted this to our face, you can download or rip a CD from YouTube. Having bad-ass designs on shirts or something unique like can koozies or shot glasses with the band logo sell really well, and essentially get you just enough money to make it to the next venue.
NRR: You guys have already played a few different festivals, with summer not that far off, which of the big festivals would you drop everything to make a regular appearance on stage for the entire run? Why?
Keith: We would drop everything to do Mayhem Festival, Summer Slaughter, or Warped Tour. The major reason being the exposure we would get, that is a huge amount of new people who enjoy music like ours that have never seen us or heard of us. Another reason for us personally is that we all grew up waiting all year to see who was on these festivals and putting together road trips with friends to make it out and see these festivals so to have a chance to actually play on one of them would be a big deal to all of us.
Katie: It has always been a dream of mine since I was 14 to play on Warped tour, or Mayhem fest. I’d love to get on these larger festivals someday to be exposed to a new audience.
NRR: You guys have a pretty good relationship with your fans, are you more happy to be inspired by a fan’s dedication or to find out you helped to inspire a fan to get through a rough time?
Keith: The relationship we have with our fans is huge for us, the fans are the only reason we can continue to live our dreams and do what we do. They make stepping up on stage worth while, and knowing that we could inspire a fan or help them through a tough time is really an amazing feeling.
Katie: I feel the most inspired talking to fans who have had a rough day but coming to our show made it better, or that we were the one band that made them love metal, or it was their first show ever. Everyone has had rough times in life but relating to someone softens the blow and provides reassurance. Things are shitty but it will get better. I’m glad that in a way our shows and our music provide that outlet [or] reassurance to others as I have found solace in my favorite bands in the past.