When talking with JJ Peters expect truthful answers about life and music. Still not sure how I feel about an Aussie taking the Fifth though.

This Melbourne, AUS four piece is JJ Peters (Vocals), Matt ‘Realbad’ Rogers (Guitar), Sean Kennedy (Bass), and Alex Salinger (Drums). What started out as a solo project in 2007 has since morphed into the current line-up for Deez Nuts, (DN). And the guys have a new album dropping, WORD IS BOND, on Apr 21, 2015 here in the U.S. So, when the guys come to the States, we’ll do our best to be the first to let you know when and where. Without further delay, the interview is below.

NRR: I know when you were first starting the brand out, you were essentially a solo artist. How did you settle on the name, Deez Nuts?
JJ Peters: When I recorded the first two song demo in 2007 I had no intention for it to go much further then 100 copies past out to friends for fun. So my only interest in the name was for it to be funny and appropriate to the tongue in cheek and hip-hop vibe of the band. Deez Nuts seemed perfect. But on the eve of our fifth album and having traversed the globe explaining that name for seven years, I really wish Iâ€™d thought about it a little harder, (laughing).
NRR: When you’re writing new material, has the way it’s written changed from being solo to now having a regular line-up of four guys?
JJ Peters: Of course, the two couldn’t be further apart. We now write in the traditional manner that almost any other band that all contribute musically would. In the past I wrote everything on every instrument alone and I’m not a guitarist by any means so I was very limited. I also recorded everything so that limited me in the studio as to where I could take the band. Now each member can focus on their individual instrument and I can spend more time focusing on lyrics and vocals.

“Face This On My Own” (official video)

NRR: Was the I Killed the Prom Queen farewell tour bittersweet to you or do you think by that point your heart was set on making DN go forward and be even bigger?
JJ Peters: It wasn’t bittersweet, the band had ended a long time before that in my mind and heart. Iâ€™d achieved everything that I wanted to and more with IKTPQ and was ready and exited to move onwards and upwards with DN.
NRR: Tell me about the new album coming out in Apr, WORD IS BOND. What’s the one thing you’d like to see new possible fans in the States take away from it after hearing for the first time?
JJ Peters: It’s the most honest, aggressive, and diverse album body of work DN has put out. And I just hope anyone that listens to it finds something inspiring or relatable on the album because those are the ways I feel you can truly connect with a listener and often results in a fan for life because something there resonates with them.
NRR: Who were some of the influences of yours that helped create the sound that is DN?
JJ Peters: Well, we all find influence and derive inspiration from less than traditional sources for a band that plays our brand of music, as we all have extremely eclectic tastes. But if you were to point out the most obvious influences that deserve the credit due on this album I’d say Biohazard, Refused, Death Threat, Madball, Hatebreed, Terror, Skarhead, Transplants, Gangstarr, Biggie, Wu Tang, MOP, Onyx, Grand Master flash…
NRR: If there were a current US band getting ready to tour the States and their manager called you saying the band wanted you to open for them, what band would you drop everything for to play that spot and why them?
JJ Peters: Honestly, I personally only want to tour with bands I’m friends with, that’s where I get my joy from being on the road when weâ€™re not on stage. We’ve shared the stage with most of our favorites bands and influences that we could realistically tour with. At this point I just wanna tour with our boys and enjoy life. Although having said that, we’ve still never played with Transplants and touring with them would be amazing. Also weâ€™re huge fans and would love to watch them play every night. 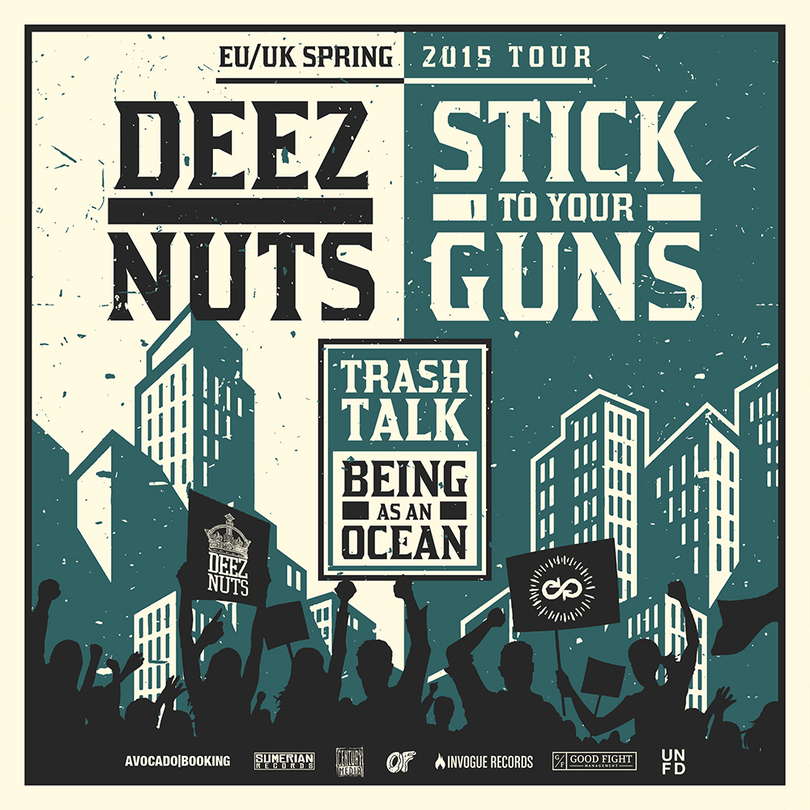 NRR: I’ve seen your style cataloged as Rapcore or metalcore to one extent or another. How would you describe your sound to someone that’s never listened to you before?
JJ Peters: I’d prefer not to, I can never find a correct description that really works. I’d prefer to encourage people to listen and make up their own mind. Although I’ve gotten in to the habit of telling people at airports and customs weâ€™re like a new age, heavier Beastie Boys, (laughing).
NRR: There has been some critique that your style is much like the 90’s version of hip hop crossing over into metal. Do you think that’s fair or people just really have it pretty wrong about your vibe?
JJ Peters: (Laughing), yeah I think that’s completely incorrect, especially in regards to the new album. There’s no one specific that people can liken us too from that new metal/rap core sound because we don’t have that. But it doesn’t really bother me; I think people are just uncomfortable with anything they can’t label or categorize, so they’d prefer to force a square peg in a round hole.
NRR: You’ve been on the music scene for a decent amount of time in one band version or another. What’s the one story or memory that every time it gets brought up, you have laugh, cringe, or just shake your head at? Your, Spinal Tap moment, if you will and that you wouldn’t mind sharing?
JJ Peters: (Laughing) everyday on tour with is results in hilarious moment, not so much cringe worthy cause were pretty simple men with simple needs so it doesn’t leave a lot of room for error. But I will say pretty much everything that springs to mind isn’t suitable for print and could get some, if not all of us in trouble.. So I plead the fifth, (laughing).
NRR: What do you guys do on the rare night off during a tour to unwind or just relax before the next show?
JJ Peters: We don’t usually have days off, ever, and if we do we don’t turn down we go twice as hard because there’s no show or any responsibility for the day, (laughing).
NRR: Is the music scene better down under or is it still a measure of success to be able to hit it big in the US as far as being an artist(band) goes?
JJ Peters: I think that will always be an element, Australia and Australian bands still live in Americaâ€™s shadow for some reason follow in tow if America sets the pace for a band. For example we have huge success across mainland Europe, Eastern Europe, Russia and Asia, but little word of this trickles back or has any effect on opinion in Australia. Where as a band who has any success in the USA will almost definitely have some of that success mirrored at home.