This five piece form Karlstad, Sweden is Isak Stenvall (Vocals), Fredrik Kelemen (Guitar), Per-Owe “Ewo” Solvelius (Guitar), Emil Ã–berg (Bass), and Sebastian Pedernera (Drums). Forming in 2009, they met at the Music Academy of Ingesund in Arvika, Sweden, and their common passion for heavy metal forged them together and Lancer was born. Their second full length album, “Second Storm”, is set for release on Apr 10, 2015 on Despotz Records label.

The band is starting to be recognized here in the States and have already made a name for themselves in their Swedish homeland. National Rock Review had the opportunity to speak with lead vocalistÂ Isak. Enjoy and let us know what you thought in the comments.

NRR: Your bio says you guys met and formed Lancer in 2009. How did it happen and how did you guys settle on the name for the band?
Isak Stenvall: We all met at a Music Academy and the first week I wanted to get some musicians together and play metal songs. We played covers for a year and in the fall of 2009 we decided to take this hobby project to the next level. We did some lineup changes, wrote some songs, and recorded an EP that gave us a contract with Doolittle Group. This year we signed a contract with Despotz Records and things are really moving, very cool. A friend of mine owned a red Mitsubishi Lancer; I looked up the word lancer in a dictionary, and it meant a rider with a spearâ€¦bingo! It sounds like a good name for our band.
NRR: I’m going to go out on a limb here and guess that English is not your first language. How did the idea to sing that way come about? Because your vocals are just great throughout the whole CD.
Isak Stenvall: That’s right, I think that Swedes are pretty good at English. One reason for that compared to other European countries is that they overdub movies, and series, but we do not. In that way we get used to the language and how to pronounce the words. With that said, I can tell you that my grades in English weren’t the best during my school years. But since I listen to a lot of music with English lyrics and watch a lot of films, and played board card games, Iâ€™ve learned the language that way.
NRR: I have to ask, what’s up with the cyborg chicken on the album art for “Second Storm?” Who’s idea was that and is it somewhat tongue in cheek? 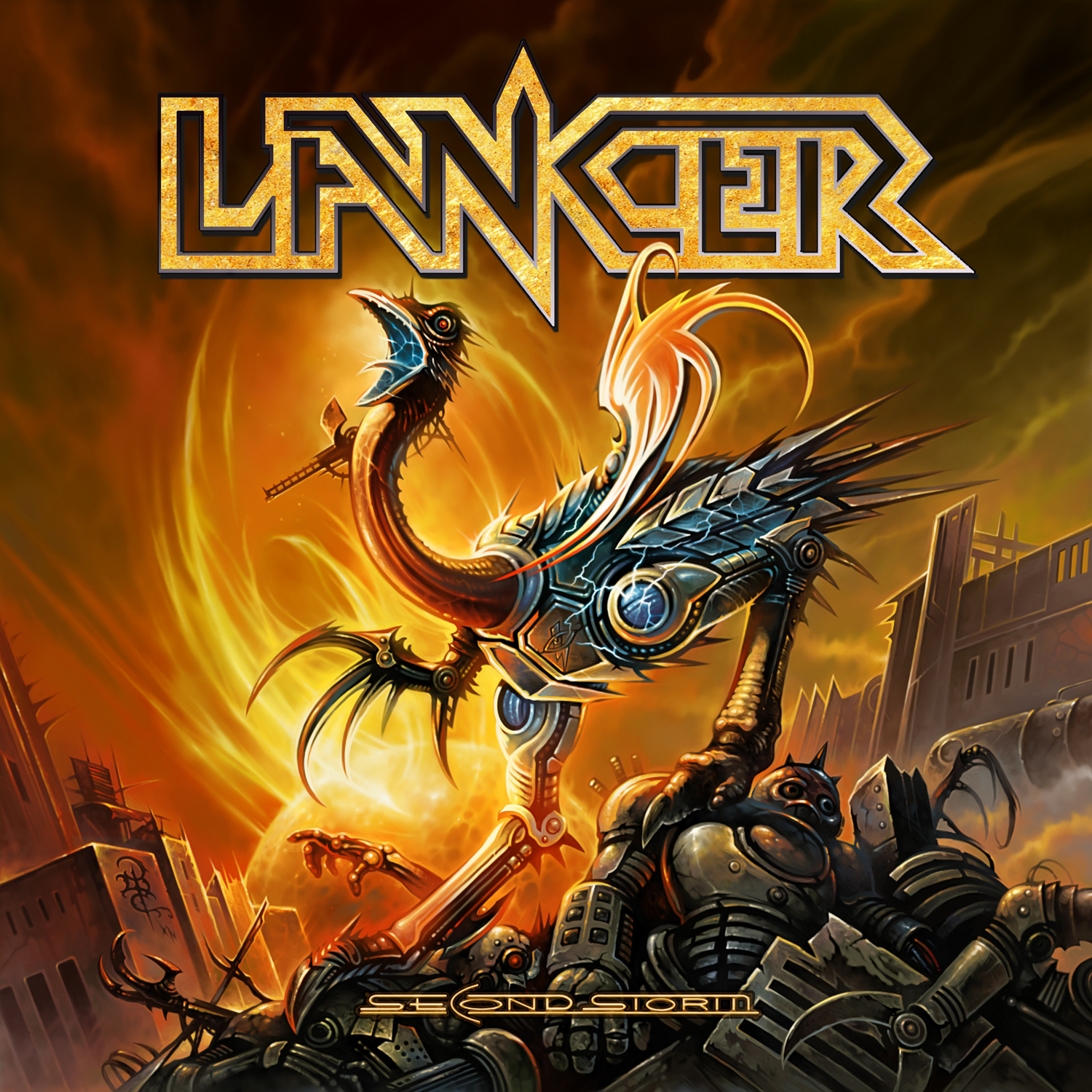 Isak Stenvall: It’s not a chicken, it’s an ostrich. It’s funny to hear the reactions, some people really get mad over this creature. “That’s not metal!â€ It shows that the metal scene is pretty weird sometimes. Itâ€™s OK to have dragons, wolves, snakes, crows, skulls, beast-men, and naked women on your cover, thatâ€™s cool and OKâ€¦ But an Ostrich is really fucked up, (laughing). If you get upset by an ostrich you probably take yourself too serious[ly]. The fact remains, if you put our ostrich on a battle field together with every other metal mascots, Iâ€™m sure that he will outrun them all and rip them to fucking pieces, (laughing)!
NRR: What was the writing process like for this record? Were there one or two main writers or was this a complete effort from the whole band start to finish?
Isak Stenvall: Some songs were written during the release of our first album. Some songs were written later that year. I guess that the whole album was written in a couple of months. Then we worked our asses off in the rehearsal room getting the arrangements as good as possible. After that we entered the studio. Most of the songs are written in the privacy of my home. Thatâ€™s how I like to work, after a song is written I show it to the guys and I either get thumbs up or thumbs down. Fredrik is also a main songwriter and he is sending me songs and Iâ€™m adding the vocal melodies. We use to have a certain sound in our heads when we start to arrange the songs, but everyone in the band is very involved in the arrangements and the detail work of each song. Everyone adding their special thing which brings something extra to the result. WeÂ´re not working on the songs at all in the studio, everything should be written and decided into detail in the rehearsal room before hitting the studio. In that way you don’t lose anything when you play the songs live, the songs are written to be performed by five musicians. We even had our producer Gustav early on in the arranging process, joining in the rehearsal room. If someone gets an idea we want to feel it and play it all together, let it sink in.
NRR: Describe to me how you see the album, or better yet, what would you want a first time possible fan to take away from this LP after listening to it for the first time?

[youtube http://www.youtube.com/watch?v=m5wFXTo7rAQ]LANCER – Behind the scenes Part 1 “Masters and Crowns”

Isak Stenvall: As a big fan of this genre I really like this album a lot. It’s very difficult to predict what a listener will experience while they hear these songs for the first time. Even if they’re not into this music I guess that our passion and love for this music shines throughout the album. It’s a good album, cool songs, well written and performed by talented musicians, no one can take that away from us.
NRR: I hear Iron Maiden as an influence for your sound. Who would you say were your biggest influences for the way Lancer sounds?
Isak Stenvall: Iron Maiden plays a big part of my life and songwriting, so I would probably pick them together with Helloween or Gamma Ray.
NRR: You have been around for a decent amount of time trying to make a name for yourselves. Has there been any one occurrence while out on the road that still makes guys laugh every time it gets brought up? Your very own Spinal Tap moment if you will, that you’d be willing to share?
Isak Stenvall: On our way home from a festival gig in Belgium in 2013 we stopped somewhere in Germany to eat at McDonald’s. And just next door was this huge building with a sign on it that said â€Pornâ€ or something like that. We have no shops like this in Sweden so we just had to check out what a German porn shop looked like, only for educational purpose of course! It was one of the weirdest sights Iâ€™ve ever seen. They had the largest collection of adult movies, toys etc. that you could ever imagine. And along with that they had their own cinema room stuffed with toilet paper rolls, donâ€™t want to know what went on in there!
NRR: I’ve seen a few write-ups of you comparing you to the new gods of heavy metal. Do you think that’s a fair way to describe you or does that put more pressure on you to deliver to those expectations then it’s worth?
Isak Stenvall: It’s great that people in the business believes in what we are doing. If you ask me I don’t think that any metal band will be in the same league as the real metal gods. Either way, pressure is always good, it’s really important that our next album after this one is better so that we secure our position as a great band.
NRR: If any US touring band called your manager to say, “We want the guys to open for us,” what band do you drop every thing for and grab your passports to make it happen and why?
Isak Stenvall: As long as it’s a cool band we would do it right away, I could give you a list of hundreds of bands that I will join on the road at this moment.
NRR: How important is social media to you as a band in Sweden? In your opinion can a band make it without it in this day and age?
Isak Stenvall: I think it’s very important to be close to the ones that really love what you’re doing. To have direct contact with fans, fanzines, promoters, and other bands. It’s hard to get out and keep a relationship and interest in your band if you’re behind locked doors, but I guess that it can be done.
NRR: Are there any plans to tour the US with the new signing to Despotz Records and how did that signing change things for the band?
Isak Stenvall: Hopefully we will come to the States in a near future; it all depends on how the response of the new record will be. If the American metal heads want us to come, we will come. Despotz has more muscles than our previous label and hopefully they can help us tie some connections to the US metal heads.
NRR: What do you think the biggest issue you guys would have to overcome in getting use to the States if a tour did happen? i.e. language, customs, being homesick?
Isak Stenvall: To get used by that fact that people carry guns around. In Sweden that’s really absurd. Over here it’s only the cops that are allowed to carry guns. I really want to visit the States, it’s a cool country. My friends that have been to the States says that America is exactly as on the movie screen. Since we all have grown up with American culture through films, it’s almost like a made up nation, like it doesn’t exist for real. It would be so cool to travel from coast to coast and see the varied landscapes and different cultures.
NRR: **Just for fun** If fans at a venue started buying shots for the band after a show, who is the first member of the band that waves the white flag first? (I.e. who is the worst drinker in the band? Laughing)
Isak Stenvall: Probably Sebastian, he’s been sober for very long. But nowadays I don’t drink that much either, especially not on tours (I want my voice to be on top every night), but if I did I would be stoned pretty fast because of my short length and body weight. Ewo or Emil would be the last to wave the flag I guess.

National Rock Review recently got to listen to the newest musical offering from the guys in Lancer. You can read about it by clicking here.