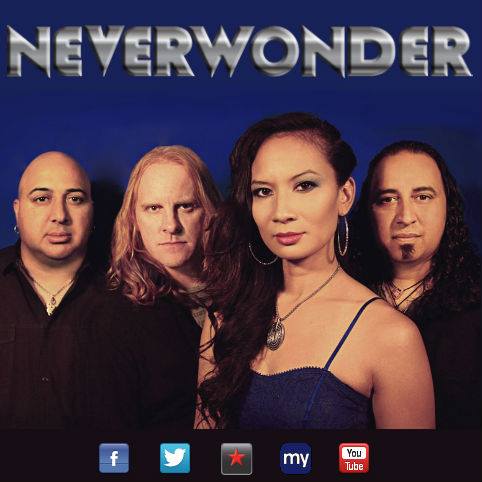 With the recent addition of vocalist Alima Soul, the band’s creative synergy has been an undeniable force to be reckoned with. Their natural chemistry evokes the creation of impressionable songs and unforgettable performances. Alima’s sultry, soul-styling and songwriting brings a new vibe to the band’s repertoire. Neverwonder (Alima Soul, lead vocals; Scott Ramsay, guitar; Vincent Ramos, bass; Andres Ramos, drums) were recently selected as one of the “25 Artists Who Made 2012 Rock” by Rockwired Magazine.

“In 2012 the band welcomed singer Alima Soul and combined the incomparable rhythm section of the brothers Ramos. Neverwonder takes flight again,” writes Rockwired Editor, Brian Lush. Neverwonder’s unique sound is a blend of rock, pop, and soul. Their music is driven by their strong musicianship and is rooted by life’s experiences. The band’s music influences include Foo Fighters, Soundgarden, Lenny Kravitz, No Doubt, Tina Turner, Mary J. Blige, and Pink. The band has performed in the past at venues such as House of Blues (LA/OC), The Roxy, Key Club, Viper Room, The Galaxy Theater and The Coach House, and has been featured on KLOS 95.5 FM radio and Rockwired Magazine, among many other media outlets. They have also been a high-powered act for several years in the Rock and Roll Marathon series.

Interview with Vincent and Andres Ramos of Neverwonder