Load up the van, travel across the northern border, play death metal, pack up the van, and head back to Florida. Yep, Gruesome’s up next.

Daniel Gonzalez (Guitar), Matt Harvey (Guitar, Vocals), Robin Mazen (Bass), and Gus Rios (Drums) make up this cast of veterans otherwise known as, Gruesome. Starting the touring in support of Savage Land, on Relapse Records, the guys are gearing up for a little rest and much death metal playing. Gus was elected to sit down with National Rock Review for the Full Terror Assault 2015 piece. We talked Canada, Death, the band, and a special appearance, maybe, and the righteousness of knowing your shit. Enjoy the interview.

NRR: What’s been going on with the band in the last year to catch the Full Terror Assault fans up to speed?
Gus Rios: We released our debut album, Savage Land, back in April and have recently played our first show co-headlining Obscene Extreme America in Montreal. The response to the band has been overwhelmingly positive and weâ€™re excited about the future. 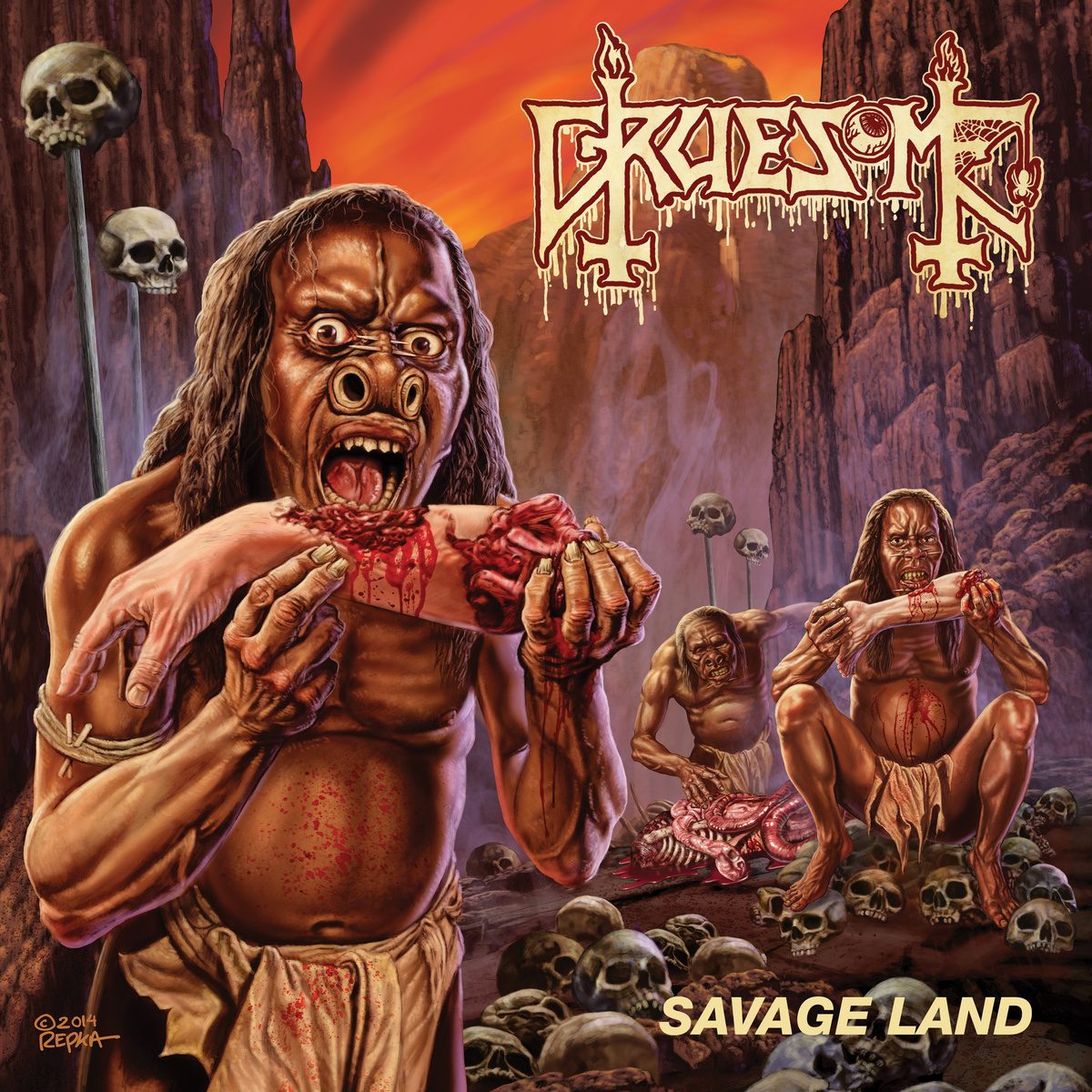 NRR: Hopefully you guys have a great time on stage this year. Are you looking forward to anything in particular at FTA?
Gus Rios: I believe we will have a special guest come up and play a classic Death song with usâ€¦ THAT will be for me a career highlight!
NRR: You guys recently played in Canada. Kudos on making past the border. What was the experience like in the Great White North?
Gus Rios: It was cool, but yeah it took us about three and a half hours to make it past the border, unfortunately. The show went great considering it was our first show ever and we only had two full band rehearsals. But thatâ€™s the benefit of having a band of veteransâ€¦ everyone does their homework and knows what to do.
NRR: Good deal. Who does your show scheduling? Montreal to Florida seems a little sadistic even for a metal outfit, (laughing)?
Gus Rios: Well Montreal was really more of just a one off. The first Florida show is a full two weeks later, fortunately.
NRR: Ah, gotchya. Has anything become of those first five songs spoken about in your bio yet, and if so, what?
Gus Rios: Yeah, we signed to Relapse Records and released the debut album, Savage Land. Aside from this short run, weâ€™re looking forward to a more robust touring schedule next year including several European festivals.
GRUESOME – “Hideous” (Official Track)
NRR: What can we expect from the band after FTA is a dark, festering wound of a discarded soldier of death until 2016?
Gus Rios: We are planning on doing a new album later this year and more touring next year.
NRR: We’ll need to keep an eye out for that then. Is there a band or bands on this year’s FTA line-up that you are looking forward to seeing as fans?
Gus Rios: Iâ€™ve seen Obituary live several times and they just seem to get heavier each time, so thatâ€™s what Iâ€™m looking forward to. Revocation is another band Iâ€™m interested in watching as well.
NRR: You guys are one of the more freshly minted bands playing FTA this year. Is the merch table as vital to you as many others have said it is for them?
Gus Rios: Merch is vital for most ANY band that plays metalâ€¦ itâ€™s the nature of the beast.

NRR: What is Florida death metal and why does it hold a special reverence for you?
Gus Rios: I grew up here and with that comes a bit of hometown honor and reverence I guess. When I first got into metal, it was mostly thrash, and Death was the first death metal band I ever heard. They took what Slayer was doing and added a swampy horror/gore vibe to it that I just loved immediately. Then it blew up with bands like Obituary, Deicide, and Morbid Angel who became super influential to a slew of bands including the booming scene over in Sweden.
NRR: What kind of show can the fans expected from you during your upcoming FTA debut?
Gus Rios: Weâ€™re playing several songs from our debut as well as a choice Death cover. Everyone in the band has been doing this for over 20 yearsâ€¦ we know a thing or two about how to play death metal! Weâ€™re looking forward to seeing everyone there! Thanks.