“No rest for the wicked,” should be made from now on in the name of the following band in the interview loft, we’re just saying.

Keith Wampler (vocals) and Katie McCrimmon (keyboard) with the rest of the crew have been on the radar for National Rock Review for quite some time now. The Convalescence is the little Toledo, Ohio deathcore band that might have the legs to make it onto the national stage and stay there. With their latest album, Poison Words, doing well, a fabulous CD release party, and making a few bucket list items into memories, the band has barely had a moment to catch its breath.

While on the band’s personal sauna, we were lucky to get with Keith by way of free WiFi to talk for a few minutes about coming back to Dirt Fest and a few other items like their new album and personnel changes. Grab a towel because like the tour schedule in July and August, it’s pretty fifth plane of Hell hot.

Roll over to our Facebook or Twitter page and let us know if you’re going to see the band, or have some photos of them live you’d like to share. We enjoy that or pictures of cute dogs.

NRR: Thanks for taking some time out of your busy schedule to answer some questions for National Rock Review’s Dirt Fest 2016, again, coverage. What’s been going on with the band, The Convalescence, so far in 2016 since we talked to you guys last?
Keith Wampler: We recently released a new album titled Poison Words through 3Thirteen Entertainment Group/eOne Music, played South By Southwest Music Festival, did our first ever European tour with Suffocation, Cattle Decapitation, and Abiotic, and crossed opening for Slipknot off of our bucket list. It’s been a good year so far.
NRR: You guys will be on the road with another Dirt Fest band, Crossing Rubicon, in August, I take it there’s no rest for the wicked?
Keith Wampler: Yeah, other than taking a couple weeks off in June we have been on the road non stop since late February.
NRR: I hear that you guys need an air conditioner in the bus to keep the ice cream cold. But in seriousness, what does the band do to kind of unwind from the grind of being out on the road?
Keith Wampler: Yeah the bus needs an A/C pretty bad, touring Texas in mid to late July has been Hell. We all pretty much spend the little time we have off a year catching up with friends and family, some of us play in local bands as well, and trying to make as much money as we can to prepare for the next tour.

We made it to Florida! We'll be playing Churchill's Pub in Miami tomorrow, Come out and party with us and Crossing Rubicon! #Day32

Posted by The Convalescence on Monday, August 1, 2016

NRR: Two questions, we hear you guys are looking for a new drummer. Was this a surprise to the band and how can someone apply for the spot?
Keith Wampler: Justin let us know about a month or so ago that due to some personal things back home and wanting to jump back into things with his other band Adrift On River Styx, Donny Robertson from Beside The Silence will be filling in for us for the remainder of our current tour after Justin leaves so no shows will be missed. If anyone wants to try out for the drummer position please message our band’s Facebook page and we can provide more details.
NRR: How does it feel to play a well established festival like Dirt Fest and a big show at DTE, among others, in the same summer?
Keith Wampler: It’s amazing, we’ve been given the chance to play in front of way larger crowds than we’re used to along side some of our favorite bands. These are the kinds of shows you always dream about doing and it’s hard to picture it ever really becoming a reality.
NRR: Second question about personnel, is there ever a time where someone has left on bad terms and it comes back to bite the band when you weren’t excepting it or has it been pretty amiable with all the former members?
Keith Wampler: Yeah of course there has been a few members that have left on bad terms but as far as it coming back to bite us not really other than the obvious having to find another person to take their spot and recently Luke kicking our bus door window out. Most of the members that have left at least in the last couple years we’re still good friends with.
NRR: Tell me about the new album, how has it been doing and if there is a good video in support of it, where can people find it to see the good shit themselves?
Keith Wampler: The new album has been doing great, we were really happy to see people singing along to some of the songs around the country only a couple months after it coming out. We have lyric videos for “Reflections” and “I,Dreamer” on YouTube right now but are planning on shooting a music video within the next few months.
NRR: If you were in the crowd after your set, and heard two people talking about The Convalescence, how would you hope the conversation might go?
Keith Wampler: Hopefully they had a good time and enjoyed the band, We’re up there playing heavy music so people have a good time so that’s all we can ask for.
NRR: What can fans expect to see on stage when you hit the stage in Pontiac in less then a month?
Keith Wampler: We’ll be playing a mix of new songs from Poison Words as well as a few from our previous albums The Process and Unmasking The Betrayer, we’re trying to keep the set diverse and have been switching a few songs in and out of the show depending on what type of show we’re on.
NRR: Are you guys still music fans outside of being on stage, and if so, is there anyone on the Dirt Fest bill you’re excited to catch since everyone plays on the same day this year?
Keith Wampler: Yes of course we’re music fans outside of being on stage, I know some of the guys are really excited about playing with Bury Your Dead and Born Of Osiris. As for me personally I’ve wanted to share a bill with Killswitch Engage since high school, I can’t wait. 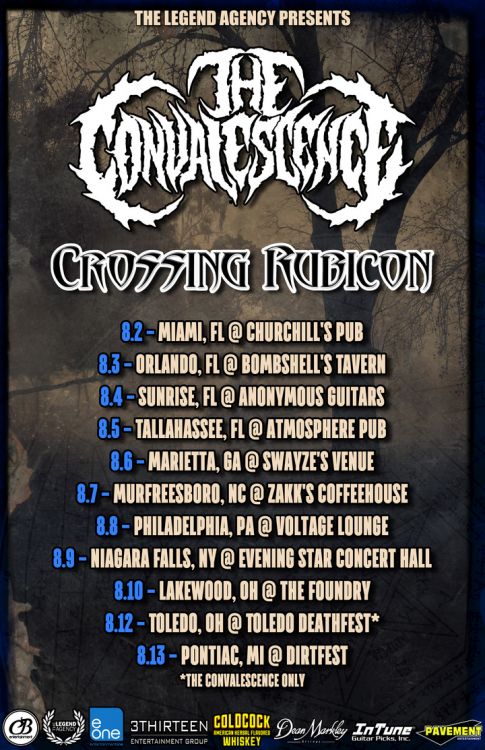