Fate is believed by some to be unavoidable. That, what is meant to happen, will. So, make it your day and don’t give it up.

Tom Sundquist Jr. (vocals), Rory Wills (guitar), Jer Weiger (drums), Josh Beaver (bass), and Chris Shelafoe (guitar) make up a little five piece outfit from Marquette, MI forever known as Our Dying Day. Having many influences such as Killswitch Engage, Tool, Chevelle, and The Misfits in the mix, the guys have continued their journey to mix those sounds together along with their own spice to create a musical vibration all of their own. And that has led them to Pontiac, Michigan and Dirt Fest 2016.

After threatening to expose all of the lewd and vivacious things happening at their sets all over Michigan, they finally threw the bassist at us to appease our curiosity of all things Our Dying Day. So, we drilled Josh until he came clean about the new music being worked on, the snake filled merch items, and apparently if the song slinger game doesn’t work out the guys will start taking orders for custom female companion creation. Just read the interview. It will all make more sense after you do.

After laughing hilariously at the mirth worthy items below, head over to our Facebook or Twitter pages and let us know what you thought of the piece or the band in general. We have some bills and could use the traffic. And your opinion counts. But mostly our tab is due at the cantina and we need the cash. Either way, enjoy the show.

NRR: Thanks for taking some time out of your busy schedule to answer some questions for National Rock Review’s Dirt Fest 2016 coverage. What’s been going on with the band Our Dying Day, so far in the first half of 2016?
Josh Beaver: So much! We have been working on refining our music, recording, and producing in order to get it out to the masses. With this digital age that we live in, it is sometimes a futile attempt. However, with the help of some really great people [like our] family, friends, and fans weâ€™ve come far. Outlets like Dirt Fest provide bands, like us, recognition. For that we bow our heads!

NRR: For those that donâ€™t know of the band at this point, who is in the group and where did you guys run into each other and think that music was the way to go?
Josh Beaver: We have Tom as our vocals, Rory on rhythm guitar, Chris as our lead guitar, [me] on the bass and Jer on the drums. Our coming together is simply the desire to create and share music. Tom and Chris grew up together and lost touch when Chris moved away only to run into each other at The Racket when Tom, Josh, Jer, and Rory were creating some jams at Chrisâ€™ music venue called The Racket. Josh played in a band years ago and met Tom on the street, when the drummer in that band, saw Tom standing on the sidewalk, his look fit the bill, so the drummer asked him if he sang. â€œHELL YEAH!â€ he said. Sometime later, while Tom and Josh played in a band together for a biker club in Escanaba they met Rory who happened to be at the show.
Fast forward to a number of years later, I moved to Marquette and he ran across an ad on Craigslist looking for a Bassist. Here enters Jerâ€¦ Jer posted the ad which read, â€œLooking for an experienced Bassist for a new Metalcore band out of Marquette, MI.â€ I replied and decided to meet up and give it a shot. Come to find out that Jer had recently moved back to Michiganâ€™s Upper Peninsula and was jamming with Rory. It was an easy fit and comfortable for all three because I had already known Rory and Rory had been playing with Jer for quite some time.
Now, here we were without a singer. Josh called up Tom and asked if he would try out for the band. Tom was a bit hesitant because he was already in a band back home in Escanaba but eventually decided to give it a shot and again it was an easy fit because we were all a bit familiar with each other already.
One of Our Dying Dayâ€™s first gigs was at The Racket in Marquette, Michigan, where Chris again entered the picture. We were looking for another guitarist and had tried a few prior without much success until Chris. And thus forming the complete package that is Our Dying Day!
NRR: If you had to describe your sound and influences to a new fan, how would that conversation go?
Josh Beaver: Well, as for influences and our particular sound, that is a HUGE question. For the most part we find beauty in most all music. There seems to be something primal in the sounds that people can create as a group, something inherently genuine and honest. Music is the language of the universe and we are blessed to be able to hear it in everything and appreciate those who can hear it as well. Music, when created, by any band or individual, has its own meaning to them. More often than not, from the perspective of the creator, that meaning is quite personal. From the perspective of the listener, Our Dying Day only asks that you open yourself and become aware of the journey that our music takes you through.

NRR: The band has a nice model for your new merch. Is the nice pair of boots around her neck in a few frames, poking a little fun at metal stereotypes, or honest band mascot?
Josh Beaver: HA! Great questionâ€¦ Do you know how hard it was to convince her to pose like that? All joking aside, we are pretty happy with what we have done as far as merch. We have some great friends who support us and who have some really great contacts in that department. Going at this without any management as of yet, and without any sponsors is a bit tricky when merch is involved. To the few that got our backs, you know who you are and we humbly bow our heads to you!
NRR: How does it feel to play a well-established festival like Dirt Fest thatâ€™s a home game for you, basically?
Josh Beaver: Intense! We are honored to be the only band that we know of, out of the Upper Peninsula of Michigan. When you get involved with an event like Dirt Fest, it really shows you how small the world becomes when everyone who is involved has such big hearts and passion for metal. We canâ€™t thank Matt Dalton and his crew enough for offering up this event, to us, and all the amazing talent that will be in one place celebrating everything Metal. Not to mention the help that this event brings to Flint. Our thoughts go out to every man, woman, and child that suffer in itâ€™s plight. There is a revolution coming. YOU ARE NOT ALONE!
NRR: Okay, the bands equipment is over a pit of boiling lava, your answer determines the safety of it all. Ginger, Mary Ann (in their prime, of course) or Lzzy Hail?
Josh Beaver: Someone get this man a drink! A question like that can only have one answer and it just so happens that Our Dying Day is currently working on splicing human DNA. The answer is Ginger Ann Hale! (Laughing)
NRR: By the looks of things, tracking and mixing new material is going on. Are you doing it all in house or are you using a studio and/or a producer?
Josh Beaver: Yeah, we are in the process of recording our next two singles; â€œScreaming In The Darkâ€, and â€œ3 Minutes To Anarchyâ€. The two we have out now are free to listen or download on our Reverbnation page, which are, â€œWelcome to the Badlandsâ€ and â€œDon Your Maskâ€. So far we have been recording and producing our own material. Both Jer and Chris are knowledgeable in that area and we all benefit from their dedication and passion in recording and producing and on the plus side, it certainly saves us quite a bit of money.
NRR: If you were in the crowd after your set, and heard two people talking about Our Dying Day, how would you hope that conversation might go?
Josh Beaver: We will definitely be in the crowd after our show. The feeling of connecting with our fans is truly the best experience we can hope for. To hear them and listen to their stories is what this is all about. We would hope the convo went a little something like this:
â€œWoah man, did you just witness what I did?â€
â€œHell yeah, that was intense!â€
â€œDid you see that mosh pit and how everybody was slamming into each other, wanting to connect, needing to release their fear, release their angst?â€
â€œYES, and did you see people lending a hand to help the fallen back up?â€
For us, music is about giving ourselves to you, the listener. It is about connecting and thriving in this human existence. It is about understanding the language of the universe and sharing it with you all.
NRR: Is there a moment, that thinking back on it now, in your time together or with any band in the past, that you canâ€™t help but feel a tad bit embarrassed about, a situation that makes you laugh despite yourself, or just still makes you shake your head in disbelief? A Spinal Tap moment if you will, that youâ€d be willing to share with me?
Josh Beaver: Nope. What happens with Our Dying Day and our fans, stays with Our Dying Day and our fans. Little memories, if you will, that make up who we are as a band. Little memories that are only viewed through the mind of the participant. Thatâ€™s not to say there havenâ€™t been plenty of moments, we can assure you, but those moments are for us and our fans. We suggest that next time, you share in those experiences with us so you will have stories to tell.
NRR: Well played, sir, well played. Are you guys music fans outside of being on stage, and if so, is there anybody on the Dirt Fest bill youâ€™re excited to catch since everyone plays on the same day this year?
Josh Beaver: Finally, the easiest question to answerâ€¦ Yes, absolutely. First and foremost, we thank every band, big or small, that is participating this year. If it was possible to see you all, we would do so but unfortunately, that is not the case. We would be lying if we didnâ€™t say that Killswitch Engage, Hatebreed, Attila, Born of Osiris, and Asking Alexandria arenâ€™t huge influences of ours but that, by no means, doesnâ€™t mean we are only there for them. Truth be told, we are there for all the bands, to support them and the people of Flint. 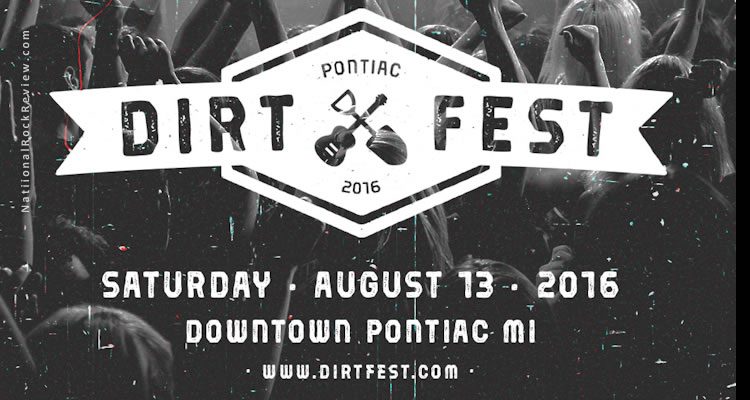