Osara is a modern rock band based in Columbia, SC. Vocalist Colton Beasley took some time to fill us in here at NRR.

After an illness setback the band, Osara has since taken the time to get things right and the biggest move was freeing up vocalist, Colton Beasley. After ridding himself of guitar duties, Colton found a new energy and the power to compel an audience. From there, who knows where the road leads for Osara. The band worked with producer Rick Beato to create their self-titled EP, which has been well received by fans and critics alike. 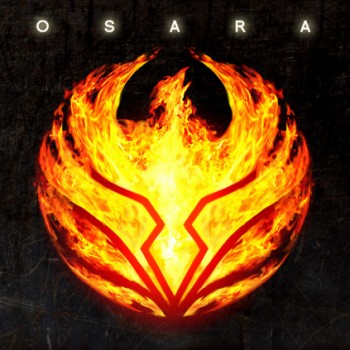 Colton Beasley: Working with Rick was really eye opening, a huge learning experience for me. It was my second time in a legitimate studio, and my first time being produced by anyone, especially of Rickâ€™s caliber. Heâ€™s an incredible ear and musician himself, so when he spoke everybody listened. He liked to bust balls, which I understood, because sometimes getting the job done right requires a little bit of pressure, but in the end he pulled the best out of us and Iâ€™m very thankful he did because we now have a great product to show for it.

NRR: What drew you to work with him?
Colton Beasley: His body of work is very impressive, and we had spoken to other local musicians who worked with Rick and had many good things to say. His work speaks for itself, and when we contacted him to inquire about the possibility he was very courteous, professional, and seemed excited to work with us as well.
NRR: For me, I hear a lot of Myles Kennedy in your voice. Maybe a little more reckless in delivery at times, but a higher range and vibrato than most. Is control a difficult thing for you in a live setting?
Colton Beasley: Well thank you! Myles is a huge vocal influence and an incredible talent. Vocal control lies in the breath support, which is a fundamental basic in singing any style. For our style, I think control isnâ€™t so difficult as remembering to remain free, easy, and unrestrained while singing, yet sounding as if youâ€™re ripping paint off the walls LOL. I also have to remind myself to use MY voice, instead of a tone or voice like my favorite singers, because itâ€™s easy to get wrapped up in sounding like someone else, but in the end the fans want to hear who you are.
NRR: Do you feel that you’ve reached the point that you know who you are artistically or do you see room for growth?
Colton Beasley: I think I know what I enjoy artistically, but as far as finding out who I am as an artist I think Iâ€™ll just keep writing and leave that for the fans to do. But I do believe that if a musician canâ€™t always assess their talent and see an area they can grow in, they aren’t a true musician. The true musicianâ€™s path is forever progressing, toward the ultimate goal of unlimited expression, which is perfection. If unlimited vocal expression and perfection comes to me before the grave does, Iâ€™ll stop criticizing my talent.
NRR: You’re in South Carolina, would you say the local scene there is fruitful or pretty stale?
Colton Beasley: The scene here is definitely very stale compared to other southern states capitals, such as Raleigh or Atlanta. Itâ€™s upsetting because there is serious talent all over Columbia, and SC as a whole, but itâ€™s hard to get that talent to the public when music has taken the backseat. We want to do anything we can to help our scene here, and that starts with being a fan. We go out to local shows all the time and try to support our friendsâ€™ endeavors, but that needs to happen on a much larger scale to get Columbia out of this rut.
NRR: Any tours in the works?
Colton Beasley: Indeed, we’re currently locking in dates July 16th-25th for a ten day tour with our friends in POYNTE, an Atlanta, GA. band and a few other groups. We have never done something of this magnitude before, so weâ€™re excited to hit the road and make music every day with badass musical friends!
NRR: I like to end on a random question. You can assume the identity of one person, for one day. Who do you choose and why?
Colton Beasley: I would say Iâ€™d assume Robert Plantâ€™s identity on the day in 1973 when Led Zeppelin broke the world attendance record for a solo concert at Tampa Stadium (set by the Beatles previously). That must have been such a celebratory show, and for them to have beaten the biggest English band to come to America was definitely a high point in their career. Iâ€™d just love to look out over that many faces while singing Zeppelin tunes, in one of the most creative time periods and of the most creative and unique bands ever.