The ice is breaking up, and the Canadian invasion is on in earnest. Grab the moose and the squirrel; we’re going to need backup, Boris.

Ben Cooligan (vocals), Billy Melsness (vocals), Robin Parsons (synth/turntables), Michael Luc Malo (guitars), and Carter Peak (drums) are the next big thing at Tragic Hero Records, but you can just call them Vesuvius. With a new album coming out in May, My Place of Solace and Rest, it is only the beginning of the media domination plan of the band from Ottawa, ON.

We got a chance to pick Ben’s rather large brain in anticipation of an imminent musical takeover of his native Great White North in preparation for global conquest. Or, you know, record sales. We talk about the band, the new album, and why guys should take the Devil’s water a little slower for the celebration. Grab your passport and ride with us on the horses we got from the Mounties barn as you enjoy this piece.

Don’t be a hoser, head to our Twitter or Facebook and drop us a few lines on what you thought or who you want to hear from next, eh.

NRR: Thanks for taking some time out of your busy schedule to answer some questions for National Rock Review. What’s been going on with the band, Vesuvius, so far in early 2016?
Ben Cooligan: Our pleasure! Right now, the boys and I are working on orchestrating our live performance for our Canadian run in support of our debut record, My Place of Solace and Rest! We also just shot a music video/short film for a song on that record that we are scheduling to have out before its release, so 2016 has been a very busy and fulfilling year thus far!
NRR: Let me start off by asking who wrote your band bio and would she/he like a writing gig with National Rock Review?
Ben Cooligan: That’s quite a compliment! The bio was graphed out by Kathleen, who runs PR at Tragic Hero, I just reworded and added content to give it a little more spice. I also wrote the lyrics for the first record. I can always be contacted for writing work personally if that’s something you guys are interested in at (withheld by management).
NRR: When band first formed, was it always meant to be the unique five piece configured outfit that you are currently?
Ben Cooligan: The band was originally the brainchild of myself and my co-frontman Billy Melsness. Our original plan was to create something emotional that we can translate and perform to a live audience, so we wanted to form the best possible lineup to communicate that. The current layout is definitely the best and most dedicated performance lineup we could imagine, and we cannot wait for their contribution on our upcoming music.
NRR: My Place of Solace and Rest is your debut effort and first album with Tragic Hero Records dropping May 06, 2016. What makes this album good enough to be the banner of the Vesuvius sound? 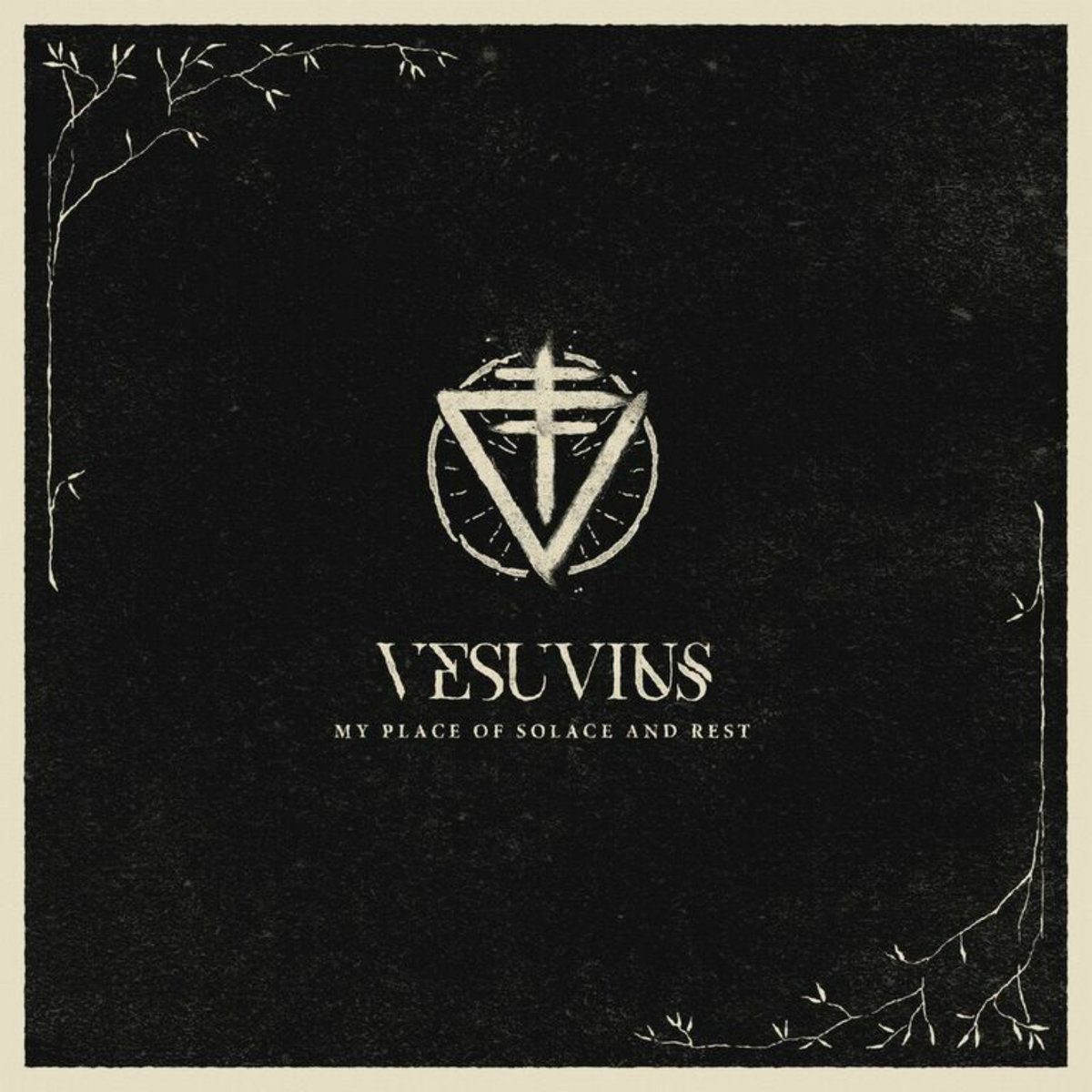 Ben Cooligan: My Place definitely started out as an experiment, but came together as an example of what we call the “Vesuvius sound”. We wanted to create something relatable with a lot of substance, but something that can translate into an enjoyable live set. I personally love to write songs with huge choruses and structure songs that have parts of emotional climax that serve as the centerpiece of the song.
Billy and I completely co-wrote the album, and his contribution of large orchestras and minimal overlays are what brings together what we are hoping to trademark as our band as our career unfolds. Tragic Hero has placed so much faith in our collaboration, and I couldn’t see us working with anyone else to unveil this project.
NRR: We’ve recently lost a few big names in music starting with Scott Weiland and Lemmy to Bowie and Fry passing as well among others. Do you have any fond memories of any of them by any chance or did those artists not really have much sway on the band’s vibe?
Ben Cooligan: 2016 has definitely been a year of deaths that have occurred much too soon. For myself, in particular, I grew up with a lot of Bowie’s music through my family, and his eccentric creativity has definitely made an impact on those who have influenced what I write in Vesuvius. Although I was never a dedicated listener to MotÃ¶rhead or Stone Temple Pilots, I can certainly appreciate what Weiland and Lemmy have done to impact the rock and roll and metal subculture. May they all rest in peace and be remembered for their contribution to what we all love.
NRR: If you’ve dropped your first single already my apologies, but if you haven’t yet, which track off the album is the strongest and deserves the honor?
Ben Cooligan: We have released two installments from our first record titled “This House is Not a Home” and “Nurture,” both of which have been large contributors to our success as a young band. As of right now, we are all ecstatic to release the video we just completed for our next single; I don’t want to give too much away as it is by far the largest project we have embarked on!
NRR: Did you find the local Ottawa, ON scene to be more supportive or more adversarial coming up?
Ben Cooligan: Although the Ottawa scene can be very competitive, the majority of our counterparts we have grown up playing music alongside are very supportive! There is a ton of unrealized talent here, and being a city where culture is still in its developmental stages, it’s difficult for artists to break out of the cycle of local shows.
NRR: Since you’re about to tour, more bands seem to be doing VIP deals on tour or really being creative with their merch. How important are these things for you not just as a revenue stream but as a way to interact with your fans? And how would you do your most memorable merch item no holds barred?
Ben Cooligan: Although I’m a firm believer that the art is always the strongest asset, these types of creative marketing are absolutely integral to the success of your band. Having a strong visual component to compliment the auditory experience is always a plus, and promotion-wise a sound investment.
Same with the VIP experience; the more inclusive artists are with their fans, the more actively supportive their fans will be. As someone who worked as an independent artist for years before developing a strong partnership with Tragic, the reactionary bonus of fans being able to personally explain the importance of your art is a feeling like no other. Being able to write something that makes somebody else, for me without a doubt exemplifies surrealism.
For myself personally, I really like physical merchandise that exploits the emotion of what I try to write. I love hand-written merchandise, such as lyric books or visual art that coincide with the story line of an album. I’m hoping I’ll be able to do something of the sort to promote My Place!

NRR: Is there a moment, that thinking back on it now, in the your short time together, or with any band in the past, that you can’t help but still feel a tad bit embarrassed about, a situation that makes you laugh about despite yourself, or just still makes you shake your head in disbelief? A Spinal Tap moment if you will, that you’d be willing to share with me?
Ben Cooligan: (Laughing), Spinal Tap moments are definitely inevitable at some point in any performing artist’s career. I remember when my first band, Of Burning Empires, was gearing up to record our first single, out of pre-celebratory excitement I cleaned off a whole bottle of whiskey the night before the drive up. There’s a video on YouTube somewhere of my band mates collecting me off the floor at 6 am in preparation for the drive to the studio.
NRR: With festival season around the corner, where would you be a good fit for a show’s lineup either up north, down in the 50, or even across the pond?
Ben Cooligan: Festival season is certainly exciting this year, especially for us up in the great white north. In our hometown of Ottawa, we throw a huge Bluesfest every summer. There’s also a festival called Rockfest about an hour drive into Quebec that will future acts as huge as Blink and Ice Cube. We’ve definitely always dreamed of spending a summer on Warped Tour or playing a heavy MTL festival; maybe not this year, but hopefully next year we can make something huge happen in North America. European festivals are always huge also; would be awesome to do a club tour with some festivals mixed in once we can arrange something with some European bands.
NRR: One thing I don’t see often is having half an album with one person on the big board, and the other half of an album has someone else on the other side of the glass. Why did you guys go that route for your freshman effort?
Ben Cooligan: We didn’t originally intend to work out our first record to have the engineering break in the middle; our producer Frank at Bird Wazo had some personal issues arrive so we decided that we would make it work and take the Hail Mary that it wouldn’t affect the overall outcome of the album. Despite the break in engineers, Doug Meadows did a wicked job of pulling out what we needed, and we couldn’t be happier with the final product.
NRR: I’ll hand over the bedazzled National Rock Review microphone, don’t mind the faint smell of tequila on it, is there anything you’d like to plug or mention before Freaky Friday starts here at the funhouse?
Ben Cooligan: We’re just so fucking excited to hit the road on an album that we’re all happy with. My Place of Solace and Rest will be available for purchase on May 06, 2016 and if I have any advice for anyone who wants to follow what we’re doing, it’s to listen to the whole thing. Every song is an entity of its own and an example of a mix of different influences, and it’s the most difficult thing we’ve ever accomplished. We’ll be playing Canadian dates in May and hopefully going down to the States in June, and we would love to see everyone there! Peace and love.