INKCARCERATION 2019 will take place July 12, 13 and 14. Official line-up to be announced in January!

The INKCARCERATION Music and Tattoo Festival is back in action for 2019! The festival brought massive entertainment to over 18,000 fans in its first year, and this year, the festival aims even higher. Taking place once again in Mansfield, OH at the historic Ohio State Reformatory – one of the most haunted buildings in the country and the setting of the 1994 cinematic classic, The Shawshank Redemption – INKCARCERATION 2019 will take place July 12, 13 and 14 and feature over 30 of today’s most electrifying rock bands. Additionally, the festival will once again feature over 70 tattoo artists from across the country, a large variety of food trucks and beverages, and even a terrifying haunted house attraction – Escape from Blood Prison.

Stay tuned to learn about the full three days of non-stop music to be heard at the festival – the official INKCARCERATION 2019 band line-up is scheduled to be announced in January! Keep your eyes on inkcarceration.com for more information.

2019 marks the 25th anniversary of The Shawshank Redemption, making this year’s INKCARCERATION at the historic Ohio State Reformatory even more special.
Ohio State Reformatory Creative Marketing Director Dan Smith says, “The Reformatory is thrilled for the return of the INKCARCERATION Music and Tattoo Festival in 2019. We had the chance to take a behind the scenes look at the upcoming lineup for this year and it is epic. You are not going want to miss this! Summer months are made to be enjoyed outdoors, and we can’t think of a better time than with live music and the opportunity to get a tattoo right here at the Shawshank Prison. Come prepared for a great time that you’ll be talking about all year.”

“INKCARCERATION, Ohio’s rock concert event of the summer, is back and set to be bigger and better than last year’s groundbreaking weekend,” adds Lee Tasseff, President of Destination Mansfield. “You can’t beat the imposing presence of one of the world’s most (in)famous prisons, the Ohio State Reformatory. This isn’t just a venue, it is the perfect environment for hard rock and tattoo art… there is no equal. We look forward to welcoming fans of rock music and tattoo art back to Mansfield!”

This year’s event will include the aforementioned Escape from Blood Prison attraction, which is held at the Ohio State Reformatory each fall. The attraction will be making a special early appearance at INKCARCERATION 2019, and you don’t want to miss this – once Blood Prison takes over the Reformatory, it gets filled with blood thirsty inmates waiting for its crazed victims to enter and try to make it through the facility alive! Learn more about Escape from Blood Prison here.

Escape from Blood Prison Haunt Manager Vic Amesquita says, “It’s an honor to be able to open the doors of Blood Prison a couple months early and give the guests of INKCARCERATION a few scares in July! The crew at INKCARCERATION are great to work with and The Warden, his Family, and the Blood Prison inmates are all excited to meet the fans!”

This coming Tuesday, November 20, premier rock and metal website Loudwire will release the debut episode of their 10-part weekly series, Needle and the Damage Done. The series of videos features rock legends telling the insane stories behind their most famous tattoos. Filmed on location at the inaugural INKCARCERATION Music and Tattoo Festival this past summer, Loudwire was granted private access deep inside the haunted cellblocks of the Ohio State Reformatory. This ten-part documentary series features such guests as Dave Lombardo of Suicidal Tendencies, Mina Caputo of Life of Agony, Corey Glover of Living Colour, Dez Fafara of DevilDriver, Lajon Witherspoon of Sevendust and Ben Weinman of the Dillinger Escape Plan, as well as members of Rise Against, Of Mice and Men, Lit and ’68. 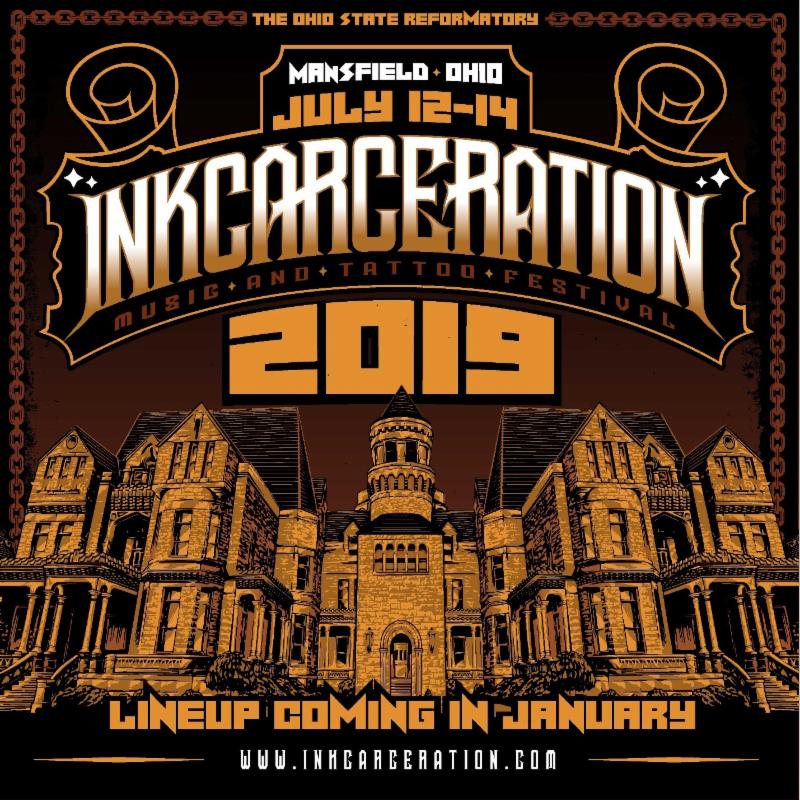 Mike Muir of Suicidal Tendencies said in the inaugural year wrap-up press release, “We had a blast at INKCARCERATION at the Shawshank Prison… great festival, great location. We were really excited about [performing] beforehand, and afterward we thought it was even better! Great people, great time… hopefully y’all will be coming back years and years later!”

Dez Fafara of DevilDriver added, “INKCARCERATION was truly one of the best fests I’ve played. The line-up, the location, the catering, and the crew were all top notch and the DEVILDRIVER show was on fire thanks to the rowdiest crowd of the day! We are appreciative of the invite and would return in a heartbeat!”