Pop-punk songstress Louise Distras is getting ready to release the followup to her critically acclaimed debut album Dreams From The Factory Floor.

Louise recently took time out from recording in the studio to chat to National Rock Review about her latest single “Outside of You”, her forthcoming appearance at Rebellion Festival and touring plans, as well as an update on her sophomore album.

NRR: Louise you’ve been an Independent artist for over five years now, has it been a struggle or have you relished the challenge?
Louise: I’m so lucky to live my life doing something I love, so it doesn’t feel like hard work.
NRR: What has kept you going and motivated against all the odds?
Louise: Playing music is a privilege so I never take it for granted.
NRR: You have been very busy lately; you’re either in the studio working on the new album or on the road touring! How is your Kickstarter campaign going and could you share with us a little bit about it?
Louise :I feel like I never really fit into people’s expectations of what it means to be a woman in music. I thrive on being in places where I don’t belong and I get a kick out of stepping out of my comfort zone because it’s where I feel inspired the most. So that’s why I decided that using Kickstarter to fund my next record was the right step forward for me.
Playing music is the best thing in the world and I consider myself extremely lucky to tour all over the world, make so many friends and continue to feel so amazed and inspired by the connection and excitement I have been able to share with fans at the shows. So I wanted to take the special connection even further. The music industry is a weird, messed up place so it makes sense to me to push onwards and upwards with the people who care about my music the most. Crowdfunding the new record has been a huge success, and an amazing experience that has brought us closer together.
NRR: Dreams from the Factory Floor was an excellent album and so well produced. Have you taken a similar approach to the new record or will there be some surprises?
Louise:The new album is a natural progression, and is a reflection of how much I’ve grown as a person and an artist. The response to new tracks ‘Aileen’ and ‘Outside of You’ has been massive on both sides of the pond with heavy rotation on major radio stations, plus Team Rock named ‘Outside…’ as one of the best rock songs of 2017, which totally blew my mind. So I think the response to the new tracks offers a small glimpse of what’s to come on the second album and also proves that punk rock is still relevant in 2017, because the new artists coming up from that world are causing such a massive impact.
NRR: I know you recently released â€œOutside of Youâ€ from your forthcoming album. Could you tell us a bit about the song and the inspiration behind it?
Louise: My songs are just a reflection of the things I see, hear and feel. Outside Of You is about breaking out of the walls we put up around ourselves and the labels we give each other. It’s about fighting to be yourself in a world that wants you to be something you’re not.
NRR: Can you share with us the title for the new record and when we might see it land or is that still under wraps?
Louise: There will be something later on this year and in the first half of next year…but if I told you the album title, I’d have to kill ya!
NRR: You have played some top festivals recently and have even played Glastonbury twice. What was it like performing at Glastonbury and how does it compare to performing at the likes of Rebellion?
Louise: Glastonbury and Rebellion are very different festivals, but the one thing they have in common is that they bring people together through music, so I love playing both!
NRR: When you are performing at a festival do you get the chance to see any of the other artists performing, and if so which bands have impressed you live recently?
Louise: For me, festivals like Rebellion are all about watching the new bands. Riskee + The Ridicule, Youthman, The Shrives and Kenneths are all great bands flying the flag for Nu Punk, go check them out!
NRR: What’s the one album in your record collection you couldn’t live without?
Louise: Last week it was Standing on the Shoulder of Giants by Oasis, this week it’s Rumours by Fleetwood Mac, next week it will probably be Slayer.
NRR: You have a mini tour next month up north playing Newcastle, three Scottish dates and then back down to York. In terms of your live shows what’s your favourite song to perform and why?
Louise: No I don’t have a favourite song, but I love Scotland because Scottish fans always make the shows so special. I’m really looking forward to going back and playing the new songs for everyone to hear. It’s gonna be a great tour!
NRR: Have you had a chance to perform many of the tracks from your new album live and if so what’s the response from your fans been like?
Louise: Yeah, the response has been massive and I think the love for the new songs is reflected in the success of the Kickstarter. Fans are so excited about the new album and want to see it recorded just as much as I do. It’s an amazing feeling knowing that when I walk into the recording studio, they will be with me every step of the way.
NRR: What else do you have in store for the rest of this year?
Louise: The rest of this year and next is all about the new album. I’m going back into the studio in August and releasing a new single in Autumn. To celebrate the new single I’m going back to Germany with The King Blues in September, then hitting the road for a solo tour with Itch in October/November with a view to releasing the new album in Spring 2018. I’m so excited, can’t wait! Here’s where you can find me:

In August Louise Distras will be performing at Rebellion Festival in Blackpool, tickets for the festival are on sale now via http://www.rebellionfestivals.com/ 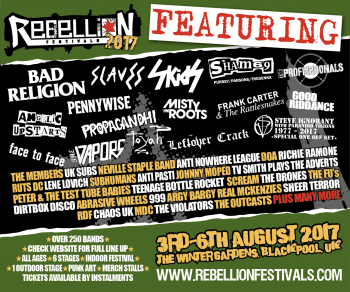