Chicago’s three-day punk, alternative rock and hip hop festival is taking place in just a few and you could win a pair of tickets right here!

The festival will take place over the weekend of September 15/17 and will feature an array of artists such as Queens of the Stone Age, Jawbreaker, Nine Inch Nails, Prophets of Rage, and Wu-Tang Clan to name just a few.

Riot Fest will be held at Douglas Park, and will be the third year at the new home, and will take place across five different stages – Riot Stage, Roots Stage, Radicals Stage, Rise Stage, and Your Name Here Stage.

A number of bands will be performing their seminal albums across the weekend including Mayday Parade – A Lesson In Romantics, Danzig – Danzig III, Wu-Tang Clan – Enter The Wu-Tang (36 Chambers) and The Mighty Mighty Bosstones – Let’s Face It.

Win A Pair of Tickets To Riot Fest!
National Rock Review has a pair of weekend tickets to give away for Riot Fest at Douglas Park on the weekend of September 15/17.

THIS COMPETITION IS NOW CLOSED.

If you don’t win, do not despair! General Admission, VIP, Deluxe VIP and Ultimate VIP tickets for Riot Fest are available to purchase from the festival website. 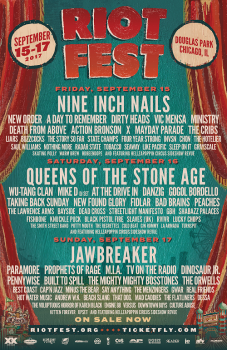