The long-awaited Eat the Elephant from A Perfect Circle is here and it doesn’t disappoint.

A Perfect Circle‘s last album was released in 2003 so when news broke that fans could be expecting new music from them along with Maynard James Keenan’s main band Tool, there was much excitement.  Getting to preview Eat the Elephant is an exciting prospect. Produced by D. Sardy, Billy Howerdel and Keenan, this is an epic sounding album with a name to match.

All instruments were performed by Howerdel for this recording which is impressive and explains the length of time for the production.  These songs grab a hold of the listener from the very beginning, building connections through the deep and meaningful lyrics.  This is a poetic album that is haunting and beautiful musically.  Keenan arguably writes some of the most poetic and intelligent lyrics in hard rock and he delivers nothing different here.  These songs are exactly what you expect from A Perfect Circle but, at the same time, they make you just stop and listen and impress you.

Each of the songs has a strong meaning.  “Disillusioned” has a beautiful sound that perfectly counterbalances the heavy meaning with lyrics like “time to put the silicone obsession down, take a look around,” begging the listener to think and react.  Other tracks like “Talk Talk” have similar lyrics that provoke the listener to think critically and take action, “try walking like Jesus, talking like Jesus.”  While the term epic may be used too frequently that is the only word that comes to mind to describe these songs.  On each listen you will hear something different musically or a lyric that is thought-provoking and meaningful.  Like most of the album, the tracks have a heavy drum and keyboard forward sound and the vocal seems almost quiet.  That is to not say it is weak, quite the opposite, the delivery and the lyrics perfectly meld together to create a powerful and meaningful song for the listener. 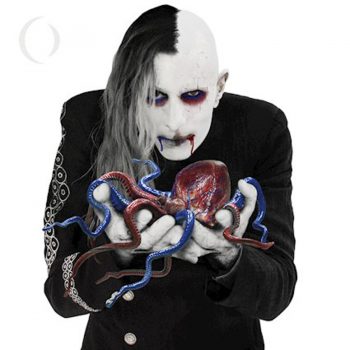 The album is perfectly bookended by the opening track “Eat the Elephant” and the closer “Get the Lead Out.”  These songs mirror each other in sound and could almost be heard as two halves of the same song.  The slow brooding heavy piano-focused music perfectly envelops the album at the same time letting you know what you are in for and then almost summarizing.  While many of the tracks on this album h

ave this same sound there are some unique songs that when heard you have to stop and take notice.  One song is “So Long, And Thanks for All the Fish.”  This is different than all the tracks that come before it.  It is a more uptempo song that opens with a strong guitar sound which is different than the piano or drum forward sound of the earlier tracks.  The message of the song is another commentary on how we as a society waste time and money on things that aren’t important.  Another song with a different sound is “Hourglass.”  This is also an uptempo song, but it is the vocal style that sets this song apart.  It has a spoken word or rap-rock vibe to it that wakes the listener up.

“The Doomed” has been getting radio play for a few weeks and it is arguably one of the strongest tracks, but that is hard to say since there seems to be no weak point in these songs.  The drums on this song bring to mind an earlier A Perfect Circle song “Counting Bodies Like Sheep” which may factor into its appeal for many.

Songs on this album are for the most part longer, each around five minutes in length.  Every song is a journey on its own but when you listen to the album start to finish it is clear that this is an overall musical journey that should be experienced in its entirety when possible.  Like is expected from A Perfect Circle, the music is complicated and the vocal is delivered with Keenan’s signature wail.  It is a sound unto its own that no one can seem to emulate though many try.  These songs sound almost chaotic at times but in that chaos there is perfection.  Fans who have been waiting for this album will not be disappointed nor will the casual listener who just wants to hear a few isolated tracks.  After fifteen years, A Perfect Circle has come back with a very strong album.

Eat the Elephant is today, the same day A Perfect Circle headlines the Las Rageous festival in Las Vegas, NV which will be an excellent way to launch this album.