Following its successful debut last year, Live From Times Square will be returning to the heart of Newcastle starting from next week.

The event will bring with it in tow a who’s who of internationally established artists and legends across the spectrum of all musical genres. From indie and rock groups through to electronica, blues and soul and much more in between, there really is something there for everyone.

Building on from the success of last year’s event, which featured the likes of Catfish and the Bottlemen, Maximo Park, Ocean Colour Scene and Fatboy Slim. This year’s programme will comprise of an impressive series of seven huge outdoor shows hosted in Newcastle city centre and will be spread over two successive extended weekends.

The first instalment of this musical marathon will take place between Thurs 27th July and Sat 29th July. The opening night will feature Jake Bugg topping the bill with support from rising stars Sundara Karma and Cabbage, before the second show of the series sees British electronic outfield Leftfield perform their seminal album Leftism in full.

On Saturday 29th July, Indie superstars James will close out the opening weekend with a strong under card featuring the likes of both Peter Hook and the Light and Milburn.

Live From Times Square will reprise on Thurs 3rd Aug with The Libertines making their first appearance in the North East of England since their reformation in 2014; support will come from Teeside boys Maximo Park, Blackwaters and local lads The Pale White.

As a change of pace, Hacienda Classical will be taking over Times Square on Fri 4th August with Graeme Park, Mike Pickering and the Manchester Camerata Orchestra delivering a fresh take on the distinctive sounds of Manchester’s most beloved nightclub.

Heading into the final two days of the event Manic Street Preachers top an action packed Saturday which also features West Yorkshire’s finest indie-rock band The Cribs, electronic outfit Public Service Broadcasting and Dream Wife. Obviously, that’s a lot of bang for your buck, it is no surprise that tickets are close to selling out.

On Sunday 6th August, the finale of almost two weeks of live music will be provided by one of the greatest singer songwriters of our time; the Beach Boys front man and musical icon Brian Wilson, who will be performing the band’s legendary album Pet Sounds in full for the final time in the UK. Brian will also be joined onstage by special guests and Beach Boys bandmates Al Jardine and Blondie Chaplin.

As an added bonus, following a recent sold out appearance at the O2 Academy Newcastle, US based bluesman Seasick Steve will also feature on the bill along with soul legend Martha Reeves and the Vandellas and a whole host of North East heavyweights including Lanterns On The Lake, Cattle and Cane and The Lake Poets.

To have such an impressive and diverse array of musical talent on our doorstep here in the North East is a real coup. Tickets for all shows are available now via the official Live From Times Square website or in person at RPM Records and Reflex Records in Newcastle city centre. 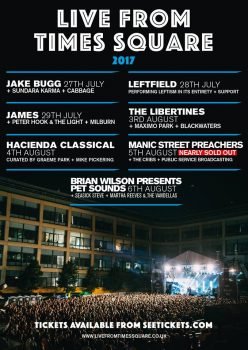