Full Terror Assault Open Air Festival – the first true European-style open air festival for extreme music fans in the U.S. – will take place September 4, 5, 6 and 7, 2019 at Cave In Rock, IL’s Hogrock Campground. Fans will experience two days of pre-parties and activities, plus two more days of non-stop blistering sets from the best bands in underground extreme music of all kinds. 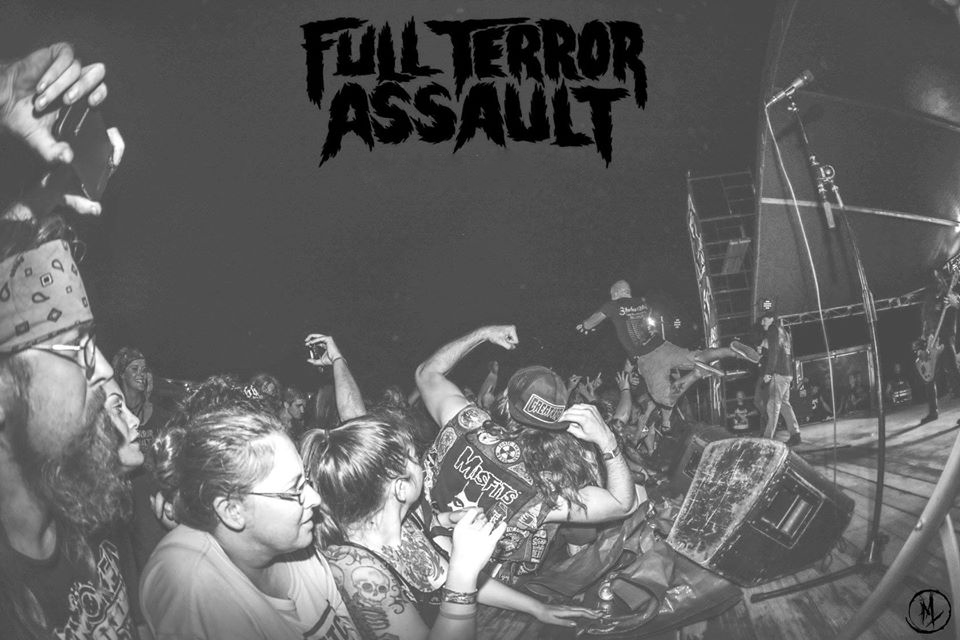 Full Terror Assault Open Air Festival is an experience designed to bring metal fanatics of all walks of life together for a celebration of extreme music without breaking wallets. Two day GA passes for September 6 and 7 start at just $79.99, including access to camping! Information and additional pricing for two, three and four day GA passes, pre-party passes, ultimate VIP passes (including merchandise, swag bags, backstage access, and beyond), additional accommodations, vendors and more are available via fullterrorassault.com.

Once onsite, Full Terror Assault Open Air Festival attendees will find a home away from home nestled within the picturesque Shawnee National Forest, with over 100 acres of wooded campground land, scenic lakes, and even a beach! Best of all – camping is free, with upgrades and trailer/RV/golf cart passes available via fullterrorassault.com.

In addition to the festival itself, fans will enjoy campsite and costume contests, a morbid metal market, food vendors, after parties featuring even more killer bands, and a DJ to keep the party going all night. Please note, Full Terror Assault Open Air Festival is completely BYOB/BYOA. 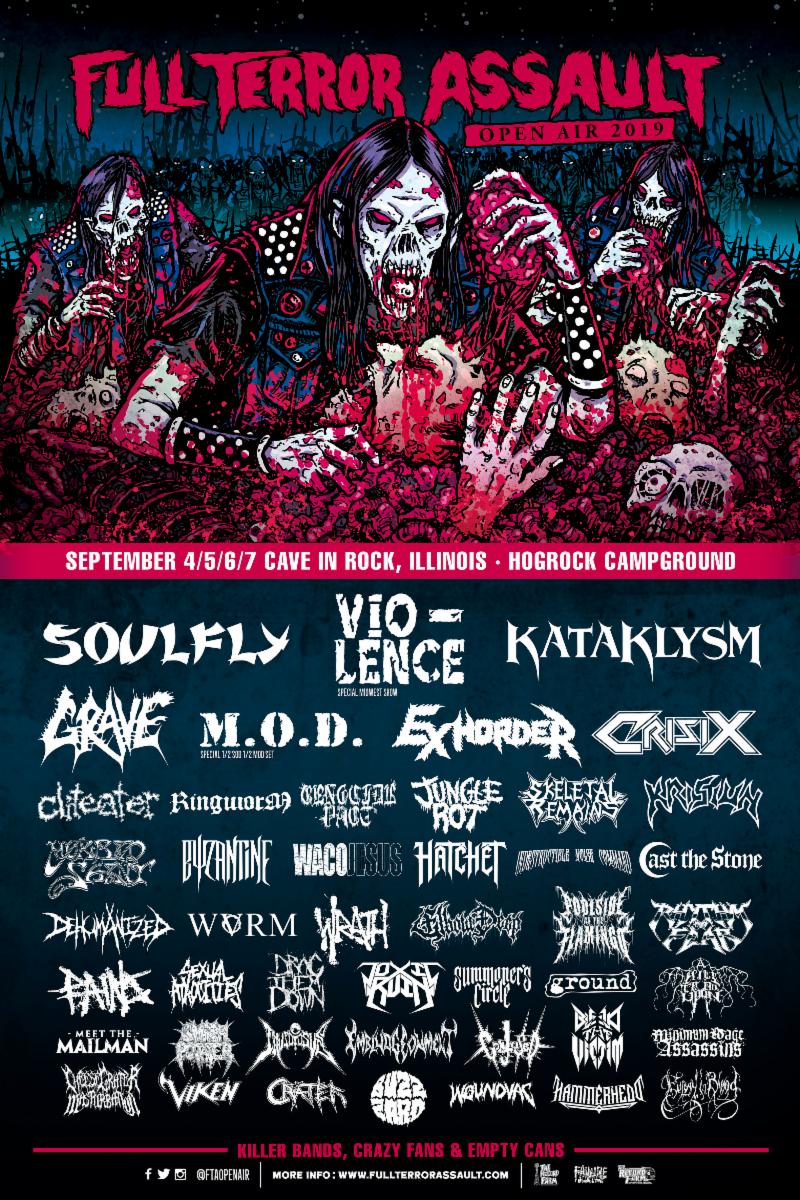 The Full Terror Assault Open Air Festival team says: “FTA is definitely not your typical metal festival and we are proud to be the first true extreme music open air festival in the USA. Above all, it is a labor of true passion for us and we are excited to be celebrating five years strong in 2019. We want you to come celebrate with us and see what it’s all about!”

Billy Milano of M.O.D. says: “We’re really excited to finally get back on the road after four years. Going out and celebrating 30 years of M.O.D. and 30 years of S.O.D. at the Full Terror Assault Open Air Festival is going to be a fitting tribute to my 92-year-old mother who I lost to cancer in September, who always encouraged me and made me fight on. I’m doing Full Terror Assault for the fans and for my mother and father. M.O.D. is going to bring the fucking pain.”

Jason VieBrooks of Exhorder adds: “It’s such a great honor for Exhorder to share the stage with so many killer bands at a festival in the U.S. that is really close to the likes of a European festival. I played FTA with War Curse a few years ago and the staff and crew were top notch! Thrash is back!”

BB Plaza of Crisix adds: “We did hundreds of shows in Europe, South America and even played in Africa and in September this year we are coming for an exclusive festival performance in the USA – Full Terror Assault Open Air Festival. We like the concept of the festival a lot. This year they have a killer line up. It will be fun to see Billy Milano with M.O.D., but I am most looking forward to see the Vio-lence reunion. They mean a lot to us, and to me personally. They are one of the most influential Bay Area thrash bands and I am so happy we are playing together. I promise that we will deliver a killer show at FTA 2019, and we invite you all to come mosh with us. We will be at the festival for the weekend and will be happy to hang out with you all. Ultra fucking thrash!” 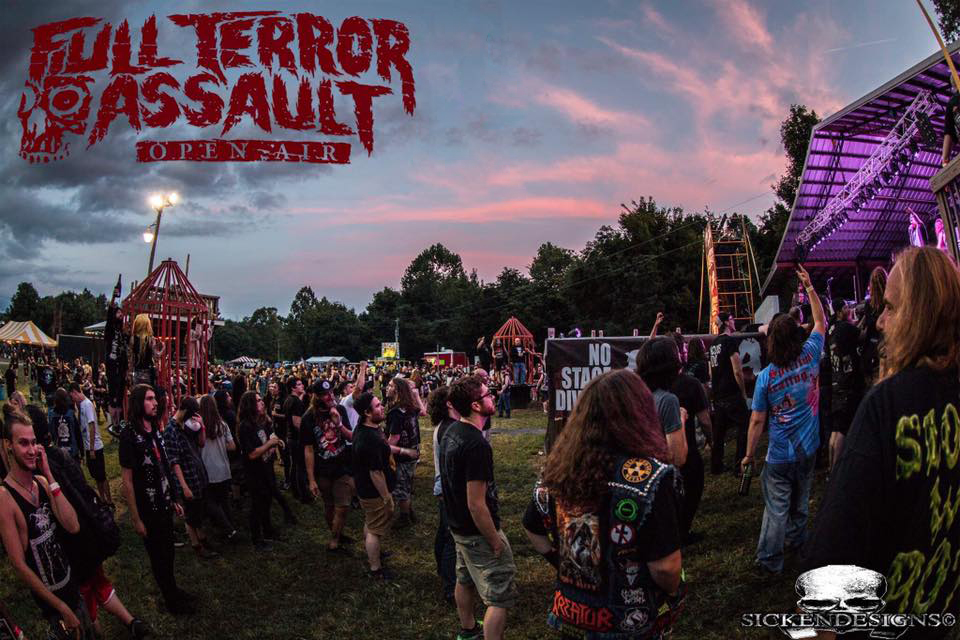 Full Terror Assault Open Air Festival is an independently run event managed by a small team of passionate, hard-working music fans – including a promoter who has been involved in the underground and extreme music for over 25 years. The festival originated with the goal of providing fans a true open air festival atmosphere without having to travel to Europe, and each year that goal has been met, with stories of the festival’s success spreading by word of mouth, online and in the underground. Previous Full Terror Assault Open Air Festival headliners include Obituary, Napalm Death, Demolition Hammer, Death Angel, Overkill, Venom Inc. and more, and last year, the festival was chosen as one of the only events to screen “Slave To The Grind” – a recently released grindcore documentary by Canadian filmmaker Doug Brown.