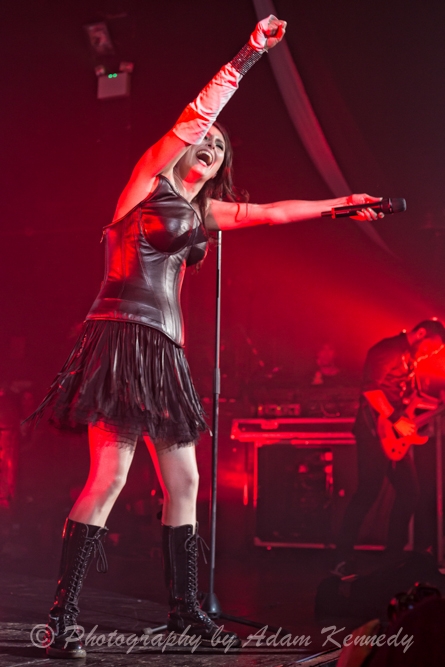 Tonight, Newcastleâ€™s rock crowd was out in full force for a big night of symphonic metal as Within Temptation brought their Hyrda tour into town.

As I approached the venue, the queue snaked around the building and had started to move up a neighbouring street. This was a first in all the many years I’ve come to this venue. The anticipation for this show was at fever pitch level.

This tour has filled arenas throughout Europe. Two nights prior Within Temptation and Delain played to 7,000 die-hard fans at Londonâ€™s Wembley Arena. This evening the band has brought their arena production to the up close and personal theatre setting of the O2 Academy. So much the bandâ€™s road crew had to shoe horn in as much of Within Temptationâ€™s stage set as possible. This just might be the smallest venue on their European tour.

A full house was in attendance to see opening act Delain. They are a symphonic metal band from the Netherlands featuring former Within Temptation keyboardist Martijn Westerholt This month, Delain released their excellent fourth studio album, The Human Contradiction, on Napalm Records.

Delainâ€™s intro music played as the lights went down on an atmospheric smoke-filled room. The band opened their set with Go Away from their album April Rain. Lead guitarist Timo Somers and bass player Otto Schimmelpenninck van der Oije were rocking in unison as captivating lead vocalist Charlotte Wessels gently swayed from the mic stand before launching into Get The Devil Out Of Me from the album We Are The Others. 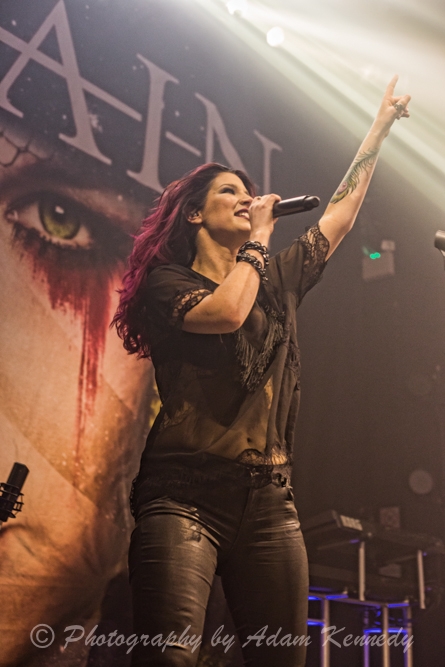 The band introduced two new songs from The Human Contradiction album; Army of Dollâ€™s and their new single Stardust (both of which were very well received). Arms were in the air as the crowd clapped their way through Sleepwalkers Dream. Somers and Schimmelpenninck van der Oije were now standing aloft, on the stage monitors, while towering above the audience. Huge cheers saw Wessels asking the crowd “Do you want some more?”, before bringing their set to a close with The Gathering and We Are The Others. The Newcastle fans sang back to the band, verbatim, with fists pumping in the air.

There was rapturous applause and screams from the crowd as the band took a bow and Wessels thanked the audience. Such a great response from the Newcastle crowd! Delain has certainly won over this audience leaving them wanting more. With the reception they received tonight, you would find it hard to believe that this wasn’t their own headlining show.

The crowd was now suitably warmed up (by the incredible Delain) and ready for Within Temptation (whose stage set has to be the biggest I’ve ever seen in this room). During the bandâ€™s intro video, Dragon, Newcastle appears on the screen at the rear of the stage signalling the start of the show. Lead vocalist Sharon den Adel appears at the top of the staircase, much to the excitement of the crowd, as the band launch into Let Us Burn and Paradise (What About Us) from their new album Hydra, complete with accompanying backing vocals from former Nightwish vocalist Tarja Turunen via a video montage played during the later.

This was an energetic performance from the talismanic lead vocalist who was dressed in a leather bodice and thigh high boots. She danced and jumped around the stage, fist pumping in the air, with her microphone raised aloft while she engaged the crowd. They loved it, hanging on to every word of every song!

The band rocked their way through the new track Dangerous before doing a video duet with US rapper Xzibit on And We Run. Within Temptation slowed it down with a stunning rendition of The Cross from The Heart of Everything album. They brought their main set to a close with Mother Earth as Adel conducted the audience, arms entwined in the air, as she cast a spell while captivating them with her angelic voice.

Huge screams from the crowd saw the band welcomed back to the stage for fan favourite, What Have You Done, and a stunning acoustic performance of Whole World Is Watching. The band finished their set with an up beat cover of Lana Del Reyâ€™s Summertime Sadness and the anthemic Ice Queen.

This was not like any other concert. It was a rock show, complete with costume changes, incredible use of cinematography (reminiscent of something from a Peter Jackson movie) and a huge stage production to boot. It was a privilege to see two amazing bands in such an intimate setting. This is a night Newcastle wonâ€™t soon forget. Within Temptation are on fire and they let us burn!

Within Temptation Set List:
Dragon (Intro Movie)
Let Us Burn
Paradise (What About Us?)
Faster
Iron
Edge of the World
In the Middle of the Night
Our Solemn Hour
Angels
Dangerous
And We Run
Elements (Intro)
See Who I Am
Stand My Ground
The Cross
Covered By Roses
Mother Earth

Delain Set List:
Go Away
Get The Devil Out Of Me
Army Of Dolls
Stardust
Electricity
Sleepwalkers Dream
The Gathering
Not Enough
We Are The Others