25-June-2016: Before Vintage Trouble take the stage, we are treated to a stomping opening set from the four-piece, Slydigs, from Warrington, England. Their modern sound shines clearly with influences that include The Who, The Kinks, and Stone Roses.

Slydigs toured with Vintage Trouble last year and recently completed a North American tour with rock icon, The Who.

Vintage Trouble vocalist Ty Taylor introduces Slydigs and the band begin a with a blistering few tracks before things slow down with “The Truth Will Be Found.” The pace picks up again for “Til the Morning Comes,” along with fantastic guitar playing from lead guitarist Louis Menguy.

The audience clapped along to what can be best described as The Who-inspired song, “Electric Love,” before Vintage Trouble guitarist Nalle Colt joins the band for a cracking version of “Hey Joe” by Hendrix, along with a little snippet of Zeppelin’s “A Whole Lot of Love.”

Their set ends with the highlight of their show, a cracking Rolling Stones influenced, “The Love That Keeps On Giving.” 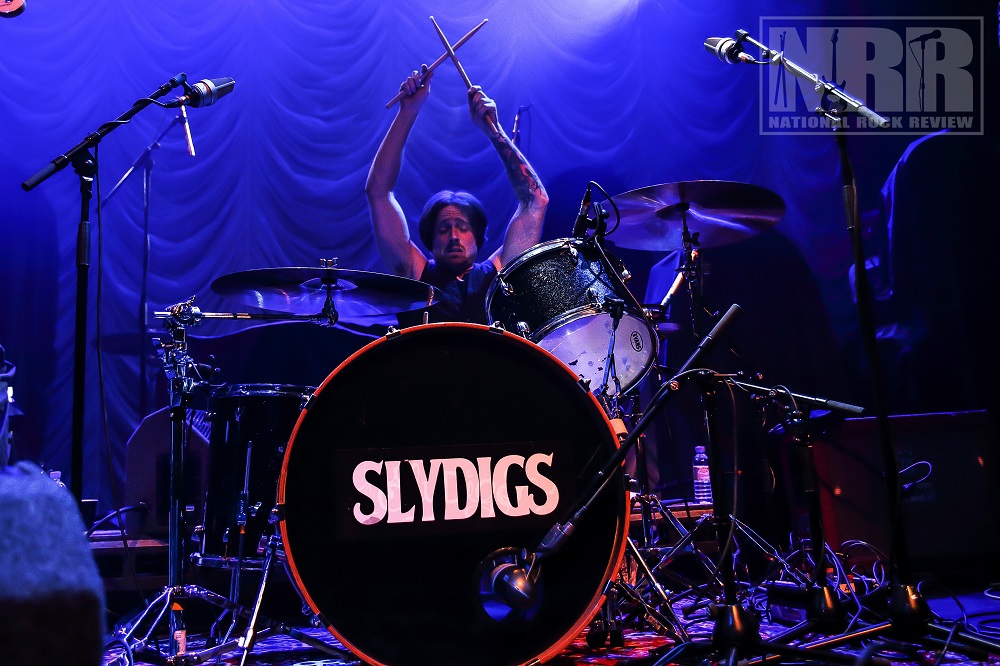 Vintage Trouble never ceases to amaze. They are a band who is always on form. Always having fun. Always dancing and moving. Tonight’s rock n’ roll dance party, as lead vocalist Ty Taylor often reminds us, makes no exception to the rule.

Vintage Trouble kicks off their show with the fast paced “Run Like The River.” Nalle Colt begins procedings on guitar with drummer Richard Danielson joining in, and Rick Barrio-Dill on bass following. Taylor enters shortly after with a huge grin and welcoming the Glasgow crowd. All four are sharply dressed as ever in suits, waistcoats, with Colt and Barrio-Dill wearing their trademark rimmed hats and Taylor a striking blue pinstriped suit and yellow tie.

The crowd goes wild and chants, “Run Baby Run,” along with Taylor. The atmosphere is electric in this classic, vintage-looking large roomed venue, which compliments the band well. Fantastic sound and lighting highlight Vintage Trouble, who opted for delicate textured drapery at the back, a few standing spotlights sporting the VT logo, and white floor covering. Their standard equipment set-up completes the stage, which Taylor uses often. It is common to see him standing on an amplifier, the barrier, or any other place he can climb. Taylor moves continuously and uses all available space.

The band play through the soulful, “Nobody Told Me,” before Taylor climbs over the barrier and into the standing crowd for “Strike Your Light.” The atmosphere is electric with nearly everyone in the venue dancing or singing which didn’t stop until the end of the show.

The audience sang along to “Another Mans Words” before a bagpiper played a musical medley with some intense drumming by Danielson joining in. The room was fever pitch by this point and many were stomping and clapping in rhythm.

Vintage Trouble followed with a medley of songs with the ever energetic and charismatic Taylor cutting loose on “Angel City.” The crowd sang along, shouted, and let fly a roar of applause. Barrio-Dill’s bass grooved along superbly for this one.

Just in case anyone didn’t get the memo, Taylor reminds us that we are at a dance party and to get our hands up. The energy that man has is relentless as was the high tempo of the night. “Jezebella” had everyone in the room moving, singing, and chanting along leading to the last song of the medley, “Gracefully”.

Taylor talks to us about Venice Beach, California, and they do a thing called a drum circle where everyone can take all their troubles, worries, and stresses and let it all out banging drums. This leads into the more mellow “Doing What You Were Doing,” with more crowd sing-along moments and raising of hands.

One of many highlights, “Blues Hand Me Down,” has Taylor doing his trademark spins and goes crowd surfing. You can not take your eyes off the guy. One minute he’s here; next minute he’s there. Unbelievable.

Another great slow number, “Turn The Sky Blue,” leads into the intimate, “Not Alright By Me.” Taylor goes wandering upstairs all around the balcony, with the crowd singing and raising hands with Taylors. It was a magical moment; intense and the most intimate part of the night.

The set ends with Taylor gyrating and playing with his mic for “Pelvis Pusher.” The temperature was now fever pitch and nearly everyone joined in.

After a short break, Vintage Trouble returned and asked for requests for the encore. The band settled on “Nancy Lee,” which continued the dance and sing along theme until the end of the show. The band took a well-deserved bow at the end.

Vintage Trouble delivered another top-notch performance. VT is untouchable. Fantastic musicianship from all band members. They are tight and look like they love what they do. They have fun, though none more so than Taylor, who uses venues as his playground. This is the way rock n’ roll should be. Their live performances are exceptional, possibly one of the best concert experience you may ever see. May Vintage Trouble continue Trouble-making for many years to come!