Snot-Heads gathered in full force to mosh, pogo, skank and throw their fists into the air as Snot invaded Flint, Michigan for their first ever appearance at The Machine Shop.

An influential part of the nu-metal movement, Snot released their critically acclaimed debut album,Â Get Some, in 1997 and disbanded in 1998 after a tragic automobile accident took the life of singer, Lynn Strait, on December 11, 1998. Exactly sixteen years to the date after this tragic loss, the remaining members of Snot made their first ever appearance at The Machine Shop in Flint, Michigan to play the Get Some album in its entirety.

Starting out the night was the Central Florida rock band,Â Lydia Canâ€™t Breathe. Playing a mix of rock and metal with hints of reggae and rap, these guys put on an amusing stage show which started out with the band members walking onto the stage wearing outfits straight out of the movie Ghostbusters. They even had someone dressed up as the Stay Puft Marshmallow man come out on stage who handed out marshmallows to the audience.

They play fun songs with irreverent subjects such as, â€œYabba Dabba,â€ and, â€œPeanutButterJelly.â€ They even handed out a loaf of bread along with some peanut butter and jelly to a member of the audience who made sandwiches for everyone surrounding them to eat.

Lydia Canâ€™t Breatheâ€™s stage presence garnered them a positive crowd reaction and interaction. The audience enjoyed their eclectic mix of heavy metal and rock; which reminded me a little of Faith No More and Strapping Young Lad. 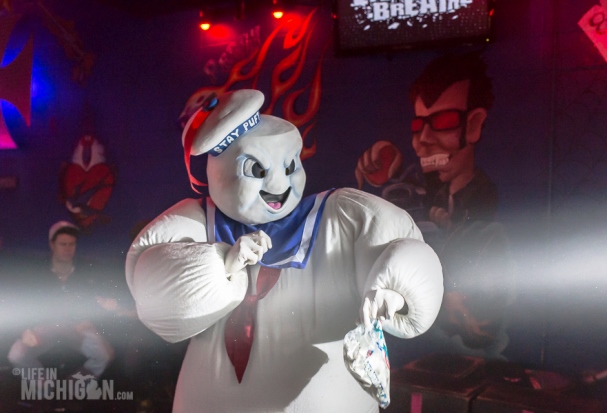 Next up was Twin Cities finest industrial groove metal band, Thira. Wearing Steampunk costumes and ready to do battle with Lovecraftâ€™s monsters, these guys took over the stage with intense in-your-face machine grind noise which bordered on industrial.

Thira reminded me of Mudvayne on their â€œL.D.50â€ album mixed with guitar tones similar to Within The Ruins and drumming reminiscent of Meshuggah. They had dual vocalists playing off each other with alternating verses, which was a nice added touch.

These guys hit heavy with odd time signatures, intense heavy grooves, melody balanced with harsh industrial elements and a percussion and light show which fans wonâ€™t forget. There was a ton of low end with 8-string guitar and 5-string bass mixed with computer synth rhythms in the background.

Picture, if you will, a steam driven death machine eating the worm, and you have what is the visual of Thria live on the stage. 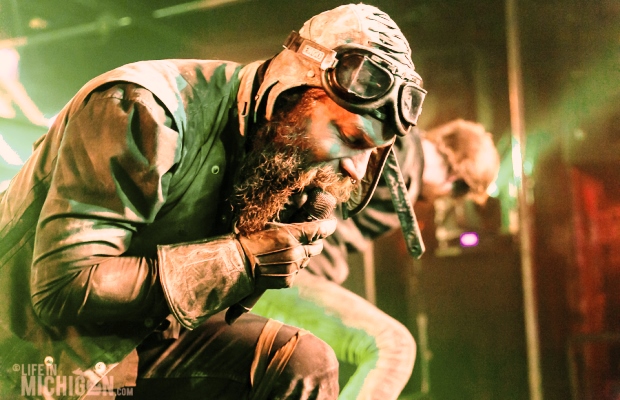 Next up was the Wilmington, North Carolina, Southern influenced stoner rock band,Â He Is Legend. Heavily influenced by 70â€™s rock with Black Sabbath notions, they added in their own unique metal style making it hard to categorize them or pinpoint the exact sound they are striving for. You hear bits of psychedelic, sludge, alt-metal and hard rock mixed into their sound.

Amongst a set full of originals, they played a dead-on cover of Led Zeppelinâ€™s, â€œNo Quarter,â€ with vocalist Schuyler Croom sounding very Plant-esque while adding in a little Jim Morrison/Chris Robinson swagger to his stage presence.

There were accents of heavy screaming in Croomâ€™s vocals, but for the most part he had a smooth stoner rock vocal quality. 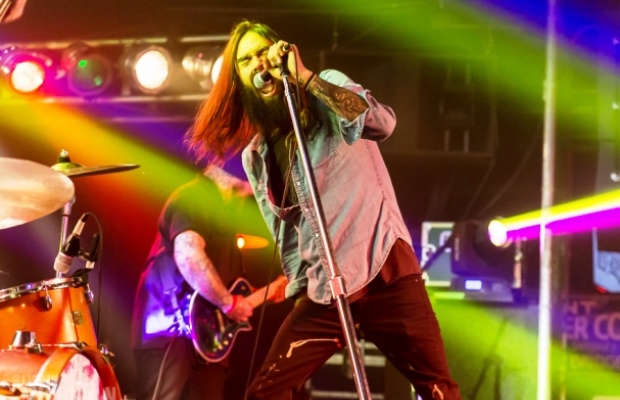 Flint waited over sixteen years for this moment. You could feel the anticipation in the crowd. The band took the stage and all it took was Bensley stating, â€œLetâ€™s fucking go, Flint,â€ and it was on. The place erupted into one big mosh pit full of people slam dancing and pogoing as the band opened up with the song, â€œSnot.â€

At the end of the first song, Mayo addressed the crowd stating â€œYo, what up Flint? What up, what up, what up? Itâ€™s so great to be here in Flint with you motherfuckers. Sixteen years ago today was the passing of our good friend Lynn. Usually we might have a moment of silence, but not tonight. Instead, we are gonna have a moment of noise. On the count of three, I want everybody to yell as loud as you fucking can. One, two, threeâ€¦â€ and the place went nuts. Everyone screamed so loudly it felt as if the walls literally shook with energy.

From the slow funky grooves of, â€œStoopid,â€ â€œThe Box,â€ â€œSnooze Button,â€ and, â€œGet Some,â€ to the slam dancing classics of, â€œJoy Ride,â€ â€œDeadfall,â€ â€œTecato,â€ and, â€œMr. Brett,â€ Snot covered all of the basis and gave the fans everything they had hoped for. Not only is this a group of extremely talented musicians but also a group of entertainers who would dance around the stage, make funny faces and commit a whole bunch of tomfoolery; at times reminding me of Anthrax during their â€œIâ€™m The Man/State of Euphoriaâ€ era but more â€˜funked up.â€™ Both Doling and Mayo even exchanged in a guitar pick throwing battle flinging their guitar picks at each other.

At one point, both Doling and Mayo turned over their guitars to two fans which they brought up on stage. Doling moshed around the stage and Mayo dove out into the crowd while these two audience members jammed away on their guitars.

Bensley filled every ounce of the stage with his active presence. He would leap so high into the air that you thought his head was going to hit the ceiling. He enjoyed being up on stage with these guys, and it showed in his performance. Bensley stated to the crowd, â€œWhen I heard we were gonna play here, I knew it was gonna be bad ass, but I didnâ€™t know it was gonna be this fucking great. Thank you so much for letting me pay tribute to Lynn by singing his songs for you tonight. Itâ€™s an honor to share The Machine Shop stage with these guys up here.â€

Doling added, â€œHell yeah, man. The Machine Shop. What else can I say? This is the best fucking club man. Thanks for having us Kevin (Zink). You guys ready to have some fun?â€ as the band cut right into the song, â€œI Jusâ€™ Lie.â€ Doling followed up the song by thanking all of the bands for sharing the stage with them.

Snot ended the night with the classic, â€œMy Balls,â€ before meandering down into the crowd to mingle amongst their fans.

This tour package of Snot, He Is Legend, Thira and Lydia Canâ€™t Breathe was a complete success in every aspect of its production. Each band, playing a completely different style of music than the other bands on this tour, were successful in entertaining the audience and gaining their admiration. Everyone, from the audience to the band members to the employees working at The Machine Shop all got along and enjoyed each otherâ€™s company. The Machine Shop threw one big party and we were all invited!

Our photographer, Chuck Marshall, was on hand to catch all of the action. Here are his images from that night.