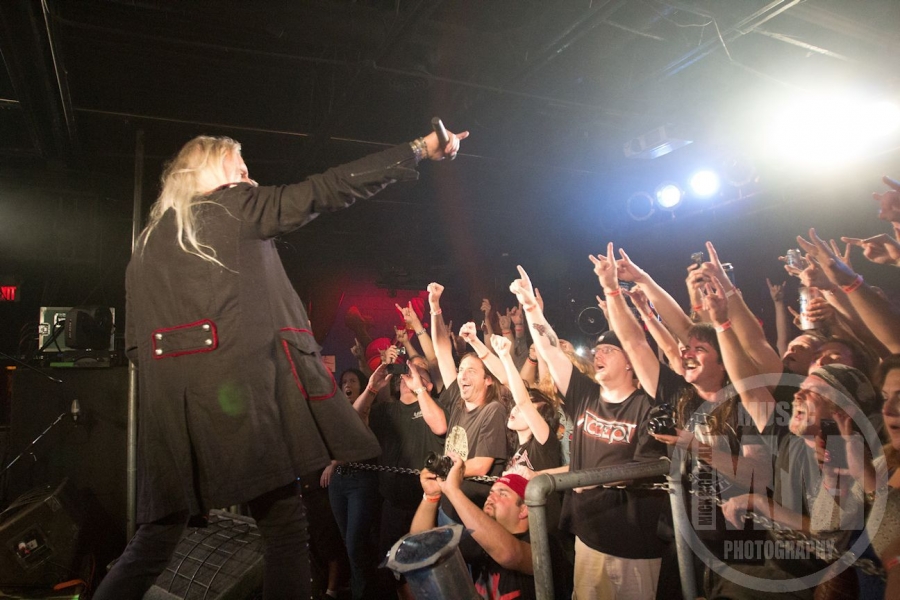 The Machine Shop is without a doubt one of the best venue’s in the Midwest, continuously drawing a great crowd and booking bands from the metal motor pool of some of the best rock bands from yesterday and today. Friday, Sept. 20,2013 was no exception with two strong support acts: Fozzy, and Halcyon Way and one of the all time great British Metal bands, Saxon, headlining. The Machine Shop was packed with enthusiastic rockers of all ages and a mixed crowd of metal (and wrestling) fans.

Halcyon Way opens the evening with a rousing and highly entertaining performance and kicks off the metal vibe for the evening at “The Shop”. Halcyon Way, is an Atlanta metal band that combines power hitting guitar riffs, strong flowing melodies, and deep, guttural bass lines reminiscent of bands like Judas Priest, Queensryche, and Dream Theatre. Vocalist Steve Braun cast’s out the metal anvil with his hair raising, body shuddering vocal range. Along with guitarist’s Jon Brodan and Sergio Queseda (not at show), Bassist Max Eve, and Drummer Ernie Topran, HALCYON WAY is a visually stunning and musically satisfying metal force! Definitely check this band out!

Next, Fozzy took the stage with front man Chris Jericho taking the lead. Chris Jericho is best known as a Wrestling Champion, but he thought he would have some fun 13 years ago forming a heavy metal band with former Stuck Mojo guitarist Rich Ward. Under the pseudonym of Fozzy Osbourne, the band relived the golden days of eighties metal playing some of the very best covers ranging from the Scorpions to the mighty Judas Priest. But, today Fozzy is an entirely different beast with (5) studio albums released since, 2000. The band has proven that they have plenty to offer of their own material.

No doubt that Fozzy draws wrestling fans to their show as evident by the wrestling T-Shirt wearing fans in the crowd at the Machine Shop. But, despite, the stigma of his wrestling background, Fozzy and band deliver a heavy hitting rock show and have gained some serious rock cred over the years. A first in history for a former wrestler. Good entertainment and killer rock n roll!

After the opening bands raised the rock barometer and primed the crowd, headliners Saxon finally take the stage. Saxon has one of the greatest rock front men of all time in Biff Byford who surely ranks alongside Lemmy as one of the most beloved characters in British rock music. His onstage persona, inter-song banter and humor match his great voice and professionalism and Biff certainly doesn’t disappoint fans at The Machine Shop, with his wild mane of corn silk rocker hair whipping around in the current of the high powered stage-fans and his vocals shattering enough to give goosebumps to even the most cynical concert goers.

Alongside Biff, are Guitarists, Doug Scarratt and Paul Quinn who exchange riffs and solos like a well oiled rock machine, and Nibbs Carter (Bass) and Nigel Glocker (drums) carry the rhythm and bass enthusiastically and full of energy.

The set list includes songs from their many studio albums including their newest release “Sacrifice” (2013), “Call To Arms”(2011), and “Wheels of Steel” (1980). The Yorkshire, England rockers are a top class rock act with their newer material fitting perfectly alongside the much loved classic hits like “Denim and Leather” and “Princess of The Night”. Saxon is a must see show for any serious metal fan who recognizes and respects the history and the roots of the British Metal Genre.

All in all, another incredible night of Rock N Roll, at the infamous Machine Shop! ROCK ON!