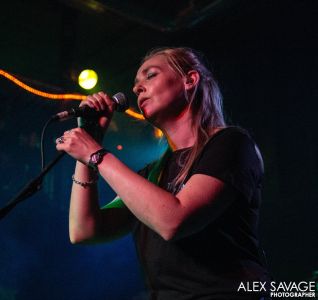 The United Kingdom’s Anathema hit the stage with France’s Alcest at Reggie’s Music Joint in Chicago last month. Â It’s taken me a while to get to this review because of the plethora of shows and events I’ve either been working on or involved in for this Halloween season.

Hello there, Â I’m one of your newest rock reporters, Alex Savage and I’m not a dude. Â I thought I would introduce myself because I tend to have a more personal style of reviewing and reporting. Â I like to bring you a bit more of an intimate idea of the shows I am fortunate to attend and instead of just babbling on about facts and set lists. Â Wait a minute, set lists are good! After all, it IS all about the music, right? Â But you wouldn’t have the music if you didn’t have passion first and it’s passion for music and photography that got me into this business we call rock n’ roll.

Anathema is more of an ethereal prog band that didn’t really start out that way in the beginning but have sort of morphed into an existentialist’s dream as the band matures. Embarking on their long-awaited first US headlining tour, Anathema began their tour this fall supporting their latest album Weather SystemsÂ and their newest live DVD release UniversalÂ (K Scope Music) filmed at the Ancient Roman Theatre of Phillippoplis with the Plovdiv Philharmonic Orchestra. Anathema also gained attention by winningÂ Â Prog Magazine’s Live Event of the year in 2012.

Their music is full of powerful metaphors and beautiful lyrics with layer upon layer of building sound until a particular track crescendos and falls into silence with a very poignant message. Weather Systems is exactly what it sounds like….WEATHER. Â During their live set at Reggie’s Music Joint, they started their set out just like the album begins with a track called Untouchable Part One which carries through to Untouchable Part Two. Â The former track comes on like a storm while the latter quiets down and envelops the earth.

Each track on the album sounds like a particular weather system, hence the name. Â Whether it be sunshine, a storm that’s coming or a storm in motion…it’s all there. Â Giving each human emotion the sound a weather pattern might create if it were set to musical notes. Â Anathema is an enigma of sorts, something that has to be heard and felt to be subsequently believed.

Anathema is comprised of the Cavanagh brothers Vincent, Danny and Jamie with their friend John Douglas and his sister Lee Douglas who in my opinion stole the show and their latest album with her powerful pipes and harrowing emotion on stage. Â Unfortunately Anathema’s usual rhythm section of John and Jamie weren’t able to be on this tour and were filled in for by Tobel Lopes, a long time friend of current drummerÂ Daniel Cardoso. Â The sound was powerful on stage if not a bit too loud for the size of the venue, but I’m not complaining. Â For a powerful and emotional musical experience, discover Anathema and roll with the storm. 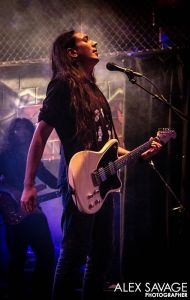 Alcest, pronounced ALL-SEST hails from France and based on their live audience, has quite a large following here in the USA. Â I overheard many french speaking Chicagoans who were very excited to finally hear them in their city.

Alcest is mesmerizing on stage and has the tendency to blow you away like Opeth does with their balance of gorgeous melodic vocals and technical ability as musicians. Â I came with a friend who wasn’t familiar with either band who based on this show has found a new favorite in Alcest.

They have quite a few albums in their catalog with a new one, Shelters on the way. Â Although you should definitely check this band out, be warned…they sing in French. Â If you’re all about the music…trust me….you won’t care. Â It’s that good.