Motley Crue is on their final tour and iconic for Crue fans around the country saying their last goodbyes to this revolutionary band.

Monday July 21, 2014 will forever be Motley Monday for myself and the other 17,376 people who were blessed to be a part of Motley Crueâ€™s The Final Tour, as the iconic Nikki Sixx, Vince Neil, Mick Mars, and Tommy Lee stopped in the city that started it all.

The days leading up to the show were electric and alive from Hollywood Blvd, to the Sunset Strip. The Rainbow was buzzing, the Hard Rock was digging deep into the Crue video vault, and the parade of Motley tees and tanks could be seen on any given street at any given time.

As the procession of fans made the trek up Highland Blvd to the Bowl there was an air of camaraderie. So many people wanted to take pictures under the Hollywood Bowl sign that lines were forming, as everyone wanted to commemorate the night. The build up was intense. For most this wasnâ€™t the first time seeing the Crue, for me it was the 23rd, but everyone was high on the anticipation alone.

As the first notes of Saints of Los Angeles screamed through the open air venue, time seemed to stand still. This was Motley Crue, in the city that started it all, playing homage to that entire experience with the very first song. The set list is the same for all dates so far, but SOLA has a special meaning when opening at the Bowl. It was magic pure and simple.

The set list was impeccable. All the hits were included with hidden gems thrown in for the die-hard. To hear On With The Show, electric and in its entirety, was heavenly. The only other time I remember hearing it at all was during their first Vegas residency, in an acoustic mini set, on the small annex stage that was lowered from the ceiling.

I noticed that on this tour, Crue has incorporated many of the elements from their two Vegas residencies into the show. The smaller annex stage from the first residency. The fire, pentagram mic stands, and blow torch bass from the second. All of it worked very well together. Everything, from the fire surrounding Tommy to Vinces bling encrusted microphone, was visually stimulating and pure Motley Crue.

As far as musicianship everything was on point. Mick, Nikki, and Tommy never fail. Vince is where things can either be amazing or dicey and on this night, at the Bowl, Vince was amazing. He looked good, he was vibrant, and most importantly his vocals were clear and strong. There just isnâ€™t a Motley Crue without Vince Neil and on a night like tonight itâ€™s even more unmistakable. The chemistry between the brothers appeared genuine and true. All bands have their interpersonal issues, but none seemed apparent here.

In addition to the core four, the guys are touring with two back up dancers/background vocalists as well. The girls are impeccable performers, their vocals are in perfect balance, and of course they are gorgeous.

With one amazing song after another it can be difficult to choose a favorite, but to me the highlight of the show, came not through the music, but from Nikkiâ€™s heartfelt speech in the middle of the set.

Walking on stage, with his bass slung low at his knees, Nikki asks the entire sold out Hollywood Bowl to take a seat. And of course we do. I have seen Nikki do this before, on a smaller scale, at various times over the years, but not quite at this level or for this long. To experience over 17,000 people take a seat and really listen gives me chills to Â just remember it.

For the next six plus minutes Nikki retold the story of the birth of Motley Crue. Of course most know this story. Itâ€™s very well documented. Yet, hearing it from Nikki, on the Final Tour, in Hollywood, was like hearing it for the first time. If when this tour is over Mr. Sixx decides to go out alone on a speaking tour, Iâ€™ll be there. Sixx is a born performer in any capacity and easily captivates an audience of thousands.

As for the whole of the show it was as it should be. The Crue being the Crue. In all their sordid glory, and everyone loved it.

The only thing we didnâ€™t get at this performance was a drum solo from Tommy. Itâ€™s common knowledge now, that on this tour Tommy has finally realized his dream of a true roller coaster drum set. From pictures and videos online it can only be described as epic and certainly one of a kind. Unfortunately, this feat cannot be performed everywhere on the tour. Most definitely not in an open air venue and by Tommy’s own account, not even at some of the indoor arenas, as their roofing structure just canâ€™t handle the beast. But, such is life, I would rather get no solo at all if it canâ€™t be the one Tommy wanted to give.

After a 19 song set, with the final notes of Kickstart My Heart, still echoing in our heads, the guys exit the stage.

All is dark in the Bowl, but from both sides of the venue, a lone flashlight beam illuminatesÂ the way. Nikki, Vince, Mick, and Tommy make their way to a small, steel stage, back by the sound board and walk on.

Thereâ€™s a piano there.

Iâ€™m sure you know what happens next.

As Tommy settlesÂ onto the piano bench and begins to play the opening notes of Home Sweet Home, the video screens to the side of the main stage play a montage of vintage Crue footage. Itâ€™s hard to know where to look. At the guys playing or the video? Knowing this is the last time Iâ€™ll see them live I watch the band. Desperately hoping that I donâ€™t miss a single note. A single word. A single move.

Every person in the Bowl sings along in a symphony of solidarity. You could hear an undercurrent of sadness in the choir of Motley Crue fans, knowing this was the last time, yetÂ it was a beautiful sadness. The kind that makes you so grateful for what you hadÂ andÂ so heartbroken that itâ€™s over. Â This was a slowed down, emotion driven version of the song, and it was flawless.

As the last verse ended and Tommy returned to his piano bench, Mick and Nikki set down their guitars. Tommy plays the final notes, Vince hums the closing to quite possibly the best ballad ever written, and Mick and Nikki stand guitar-less, tossing a random guitar pic, and taking it all in. The song is over. The show is over.

Right at that moment it really hits me that All Bad Things Must Come To An End. And it has. At least for Hollywood.

This tour is a long one though. See it. This isnâ€™t going to be one of those times that a band claims itâ€™s a farewell tour and then comes back year after year. This is it and you will regret it if you miss it, I promise. 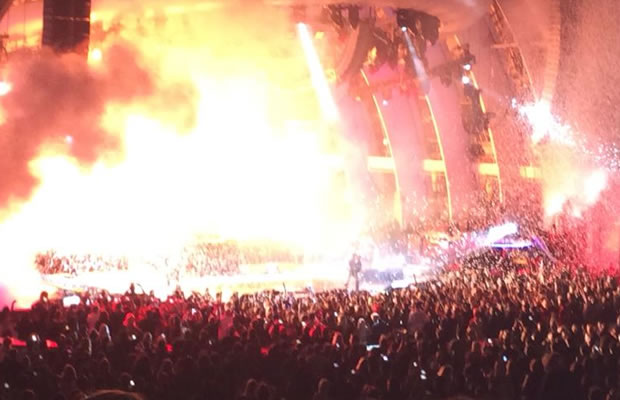