Since its inception in 2014, Louder Than Life has featured one outstanding lineup after another, going from strength to strength each year. 2017 marks the 4th year of what has become the perfect event to wrap up the festival season. Champions Park is teeming with music fans ready to enjoy picture perfect weather and a roster of kick-ass bands.

A massive crowd surrounds the Monster Energy Stage on Saturday, opening day, eager to soak in the headline performance of the legendary Ozzy Osbourne along with guitarist Zakk Wylde, playing together for the first time in over a decade. In what can only be described as a dream set of hits and fan favorites from a long and storied career, Ozzy opens with “Bark at the Moon,” followed by “Mr. Crowley”, and “I Don’t Know” fulfilling everyone’s expectations.

Ozzy’s voice didn’t seem to want to cooperate this evening with a few cracks and missed notes but Ozzy took it in stride saying, “sorry I’m a pussy, I don’t know what the fuck’s going on with my throat but I’m here man”. A slew of classic Black Sabbath songs is included in tonight’s set including “Fairies Wear Boots,” “War Pigs” and “Iron Man” each receiving appropriate ovations.

Leading into “Iron Man”, Zakk Wylde is center stage tearing through his trademark guitar solo which has him off stage, standing at the barrier giving fans a once in a lifetime opportunity to get up close and personal with the guitar god. Ozzy closes out his main set with “Shot in the Dark,” “I don’t want to Change the World” and “Crazy Train”.

The “Ozzy, Ozzy” chant from the massive crowd still crammed around the Monster Energy stage greets Ozzy and Zakk (with an acoustic guitar around his neck) as the two start off the encore with “Mama I’m Coming Home” before bringing the evening and opening day of the Louder Than Life Festival to a perfect close with a rendition of “Paranoid”.

On a day featuring some fantastic live music, there are many memorable performances.

Immediately preceding Ozzy and Zakk Wild is Five Finger Death Punch on the adjacent Loudmouth Stage. It is doubtful 5FDP could be better this evening as Ivan, Zoltan, Chris, Jason, and Jeremy come blasting on stage starting with “Lift Me Up,” “Never Enough” and “Wash It All Away” kicking the festival energy into high gear. Midway through their set acoustic renditions of “Wrong Side Of Heaven” and “Remember Everything”, powerful in their simplicity, resonate across the festival with many concertgoers doing their best to out-sing the band. Five Finger Death Punch close out their set with their typical “Punch in the face” attitude and energy with “Under and Over It” and “The Bleeding” leaving the festival abuzz.

The anticipation in the air moments before Rob Zombie takes to the Monster Energy Stage is palpable.  Rob Zombie, with his usual flair and theatrics, doesn’t disappoint, rolling through a power-packed set of hits and covers. His Louder Than Life set featuring fan favorites “Superbeast,” “Living Dead Girl,” “More Human than Human,” “Well, Everybody’s Fucking in a U.F.O.” and “House of 1000 Corpses” accompanied by a dazzling light show and video content is thoroughly entertaining. 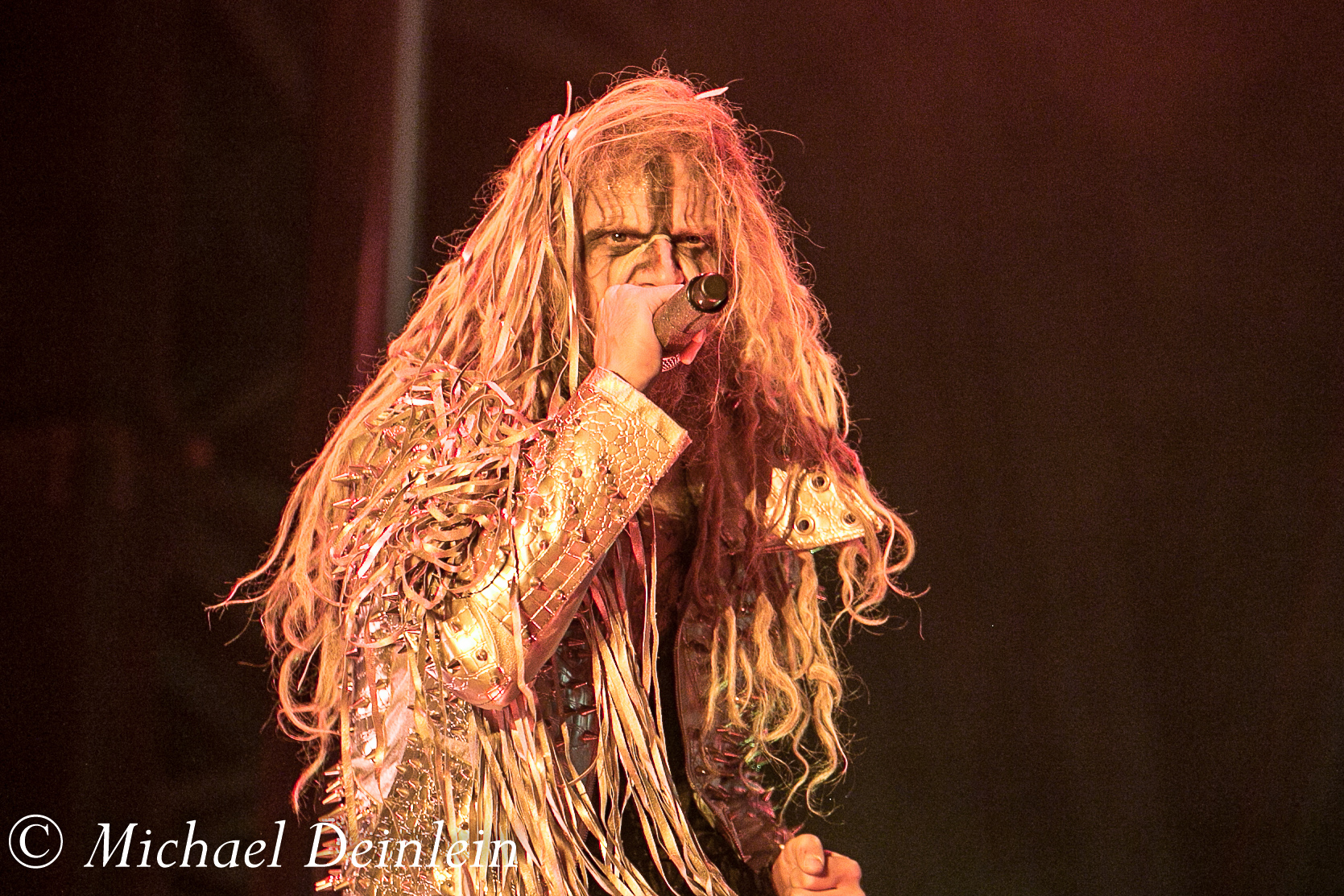 Rob Zombie closes out the set with a bang starting with a White Zombie song “Thunder Kiss ’65”, a scorching Ramones cover of “Blitzkrieg Bop”, a fun and lively Alice Cooper cover of “School’s Out”, and finally “Dragula” leaving festival goers thoroughly satisfied.

Many people were looking forward to seeing Mastodon on the big outdoor stage and are not disappointed. Starting and ending their set with “Sultan’s Curse” and “Andromeda” from their newest album Emperor of Sand while mixing in fan favorites “Colony of Birchmen” and “Megalodon” – Mastodon’s set is one of sheer power.

Lzzy Hale, Arejay Hale and Halestorm blast onto the Monster Energy Stage looking to take advantage of every moment allotted to them. Launching immediately into “Love Bites (So Do I)” Lzzy sets the tone early for what is a short but powerful set. Lzzy is both engaging and dominating on stage, alternating between smiles and serious rock growls. She is in total control from the onset – and having a blast at the same time.

French metallers Gojira are a standout on the opening day of the festival.  Featuring their distinctive deep and encompassing guitar sound, demonstrative on-stage playing and overall high energy presence, Gojira roll through a solid set including familiar songs “Stranded” and “Silvera”.

There is something about the Los Angeles based Rock/Rap outfit Hollywood Undead that is contagious and entertaining. Rolling on stage in their trademark masks and hoodies J-Dog, Funny Man, Johnny 3 Tears, Danny and, Charlie Scene with his Lakers hat, Ray Bans and a bandana covering his face drop into the anthem-like “Undead” that has the crowd bouncing from the opening bass drops. Hollywood Undead close out their set with relentless power starting with fan favorite “Comin’ in Hot,“  “Day of the Dead” before closing with the live performance debut of their newest single “California Dreaming”.

There is no death metal played by Eagles of Death Metal despite their band name. What you get is a fun and energetic performance that leaves you smiling and happy. With their usual intro tape rolling, “It’s Magic” by 70’s band Pilot, Jesse Hughes and bandmates immediately connect with the crowd. It’s noteworthy that Mastodon guitarist Hinds is also on stage for EODM’s opening song “I Only Want You”.

The music kicked off Saturday with Palisades, For We Are Many, New Years Day, He Is Legend, Sleeping With Sirens, Starset, Ded, Of Mice & Men, Through Fire, Fire From The Gods and Steel Panther.

With a successful Day 1 behind them, fans eagerly look forward to Day 2 featuring Prophets of Rage, Incubus, Stone Sour, In This Moment, Lacuna Coil as well as the hot new group Greta Van Fleet, Nothing More, Rise Against,  The Pretty Reckless, Falling In Reverse, Thrice, Beartooth, Radkey, ’68 and Black Map.