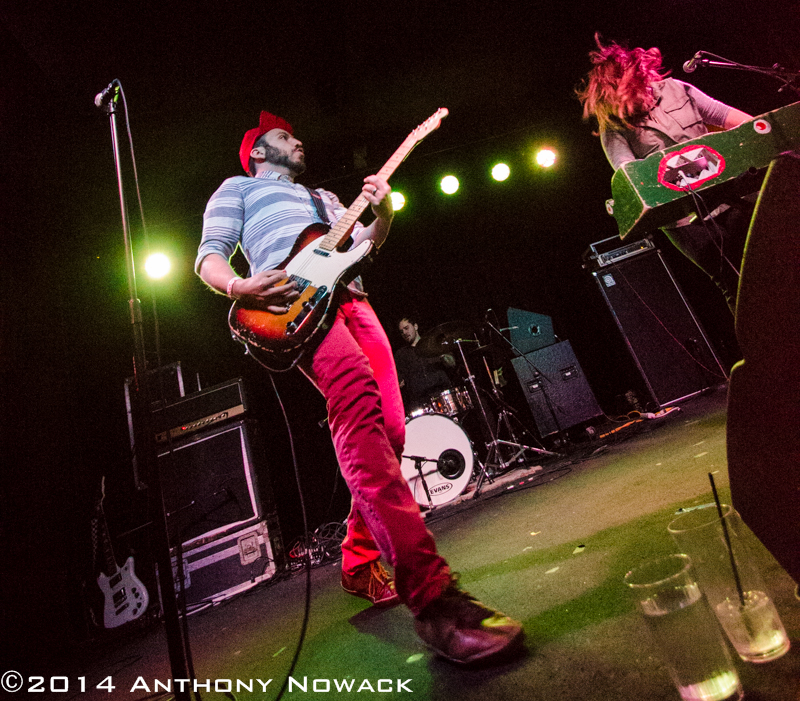 The Hard Lessons owned the stage at The Pyramid Scheme in Grand Rapids, Michigan this past Friday night. Many bands simply get on stage, play their songs, and leave. The Hard Lessons are NOT one of those bands. Their energy and vibe create a stage presence uniquely their own.

The band coalesces their hometown Detroit influences into a turbulent mixture, like the name of their 2005 dÃ©but album, Gasoline. Think 60’s Motown girl group pop combined with White Stripes lo-fi garage rock played with the punk energy of the MC5.

I’ve been following the band since that first album. Every time I see them, they consistently top themselves. Friday’s show at The Pyramid Scheme was no exception.

Guitarist Augie Visocchi, keyboardist Korin ‘Ko Ko Louise’ Visocchi, and drummer Steve Warstler treated their audience in Grand Rapids to a victorious return after their hiatus for the birth of the Visocchi couple’s son. The band didn’t take long to rev up to high gear. Soon it was all jumping, hair flying, monitor climbing fun.

The Hard Lessons whipped up the audience until they were all dancing, cheering, and clapping along to favorites like See and Be Scene, Milk And Sugar, Sound The Silent Alarm, and introduced new material from their album Start What You Finished, released this past January.

Having owned that stage, they seemed reluctant to give it back. No one in the audience moved from the room until the band played not one, but two encores. This culminated with a duet at the center of the stage, with Augie and Ko Ko singing My Kind, a song they wrote for their son. Even then, the crowd cheered as Augie put the exclamation point on the evening behind the drums while Ko Ko Louise stood behind the keyboard stand holding her purse like a spouse who has already started the car and can’t pull her husband away from his friends. And friends they all were Friday night.

The band made several references they wanted to return this summer. If they do, you should get your tickets early because a show like this gets people talking and next time will likely be a sellout.